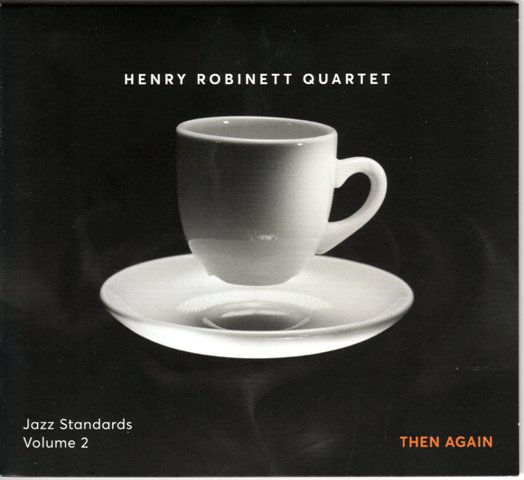 JAZZ STANDARDS, Vol. 2: THEN AGAIN / LEHAR-HERZER: Yours is My Heart Alone. VAN HEUSEN-BURKE: Like Someone in Love. It Could Happen to You. VAN HEUSEN-MERCER: I Thought About You. LERNER-LOWE: On the Street Where You Live. DAVIS: Milestones. GREEN-HEYMAN-SOUR: Body and Soul. KING-PARKER: How Am I to Know? DeLANGE-VAN HEUSEN: Darn That Dream. PORTER: I Love You. MONK: Monk’s Mood. San Francisco Holiday [Worry Later] / Henry Robinett, gtr; Joe Gilman, pno; Chris Symer, bs; Michael Stephans, dm / Nefertiti Records, no number

It was in April of this year that I first heard Henry Robinett play, on Vol. 1 of this series. Like this album, the tapes had been laying around for 20 years. Robinett always intended to release them, but things got busy, he forgot, and then he recently rediscovered the original tapes and said to himself, “HECK yeah!”

As I said in that original review, Robinett is not only a fluent guitarist, he is inventive and swinging and, thank goodness, he has some “bite” in his playing. All is not soft lounge-styled guitar here. There’s a bit of Oscar Moore, Charlie Byrd an Barney Kessel in him, and he isn’t shy about bringing that out.

What embarrasses me is that, until I reviewed his CD in April, I had never heard of Robinett. You’d think that a jazz guitarist this good would have a national profile, similar to that enjoyed by Joshua Breakstone years ago, but sadly that’s not true. Robinett has no Wikipedia biography online, only his own website where he tells you that he loves writing for his Henry Robinett Group (HRG) as well as teaching guitar. Well, he certainly has a lot to impart to young guitarists nationwide, and I for one can’t think of a better teacher to go to, except that the number of would-be guitarists who are into jazz are a pretty small percentage.

Listening to this CD is practically an extended guitar lesson in itself. Robinett covers nearly the full range of his instrument in almost every solo, and although he is not an outside player (in the avant-garde sense of the word) he clearly takes risks, sometimes going against the chords laid down by pianist Joe Gilman. Gilman himself normally plays his solos in a nice single-note style that mimics Robinett’s style but is only occasionally as adventurous as the guitarist, for instance on Like Someone in Love where he extends himself. But unlike Robinett, who somehow always comes out the other end of his solos with a clear, well-thought-out finish. Gilman just stops playing while he has tied himself up in a knot. I think the difference is simply that Robinett is a master composer as well as a master improviser, thus he is able to formulate in his mind where he is going and how to “round off” his choruses. On Milestones and Body and Soul, Gilman stays more within himself and thus plays very credible choruses. Chris Symer also plays a pretty good bass solo on Milestones.

Nor does Robinett always rely on speed; listen to I Thought About You where he improvises almost in slow motion for much of the first chorus, yet the lines he creates are both highly inventive and crystal clear. Perhaps I am stretching here, but after having immersed myself a few months back in the recorded output of trumpeter Bunny Berigan, I hear many similarities between them, most notably their willingness to take chances without losing track of where they are and of swinging hard at all times regardless of tempo. The big difference, of course, is that as a trumpeter Berigan was able to infuse his playing with greater emotion because he could pour so much air into his horn that he created a huge, emotion-laden sound like his idol Louis Armstrong. As an electric guitarist, Robinett is more limited to what his instrument and his amplifier can do, yet you can tell that he plays with a lot of feeling; and he also shares with Berigan the willingness to cover the full range of his instrument when improvising. Just listen, for instance, to the places he takes the well-worn Body and Soul. If you were to transcribe this solo and give it to a trumpet play with a huge, emotional tone, the first improvised chorus would sound a lot like Berigan.

Darn That Dream was the only hit record that jazz singer Mildred Bailey had during her short tenure with the Benny Goodman orchestra in 1939. The lyrics are dumb and inconsequential, but musicians have long been attracted to it because of its “climbing” chromatic melody line, and here Robinett creates an entirely new piece out of the same chords that, if he were to transcribe it, would make a terrific jazz composition in itself. Gilman’s solo is also a very fine one, but it sounds more like an improvisation and not like a new piece based on the same chords.

The bottom line is that Robinett is an exceptional jazz guitarist, one of the very few around today who I will go out of my way to listen to. Highly recommended!