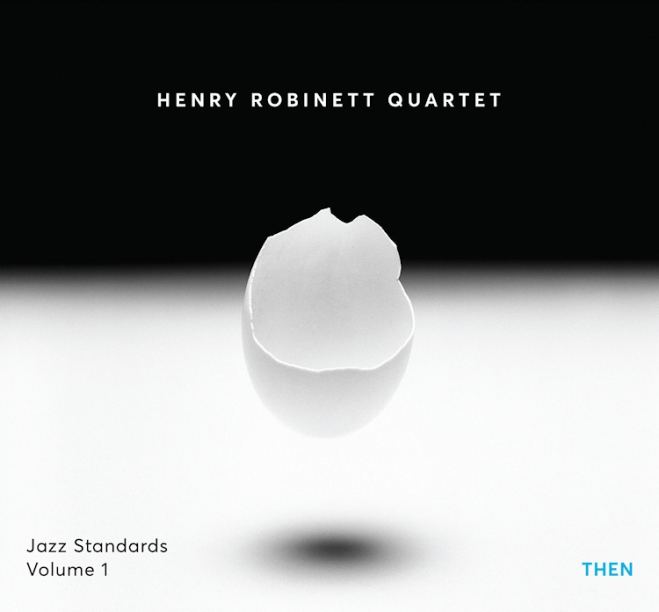 Although recorded 20 years ago, this is the first release of Henry Robinett’s album, Jazz Standards, Vol. 1: Then. Why did it stay on the shelf for so long? Because Robinett wasn’t sure if the world needed “another” album of such music, so he moved on to more adventurous territory.

But this album is superb because Robinett is superb.

My readers know how few jazz guitarists I review, and even on some of the albums I do write about I complain of one thing: most jazz guitarists plays in a soft, mushy style because that’s what became “the thing” in the late 1940s and has continued to be the standard ever since. But I don’t care for mushy jazz guitar playing any more than I care for mushy jazz pianists, so obviously Robinett is cut above the average.

He certainly is. He really swings, and although some of his playing is gentle he does not shy away from pickin’ that thing with occasionally hard strokes to propel the music. His playing reminds me of some of the best guitarists of the past such as Oscar Moore and Barney Kessel.

And he is an INVENTIVE player. His improvisations are highly original and take unexpected twists and turns. Moreover, on this disc he also has a nice sparkplug of a pianist, Joe Gilman, in addition to a perky rhythm section to move things along. Thus, in a sense, the tunes used here do not really matter as much as what he does with them, and what he does is absolutely superb. Only on Yellow Days did I feel that he got stuck in a repeated rhythmic pattern which I felt he could have varied a bit, but even here what he plays is interesting. And just listen to Gilman on piano! Without going too far outside the written chords, he plays such interesting chromatic runs, and turns the song so much inside-out, that he almost steals the thunder away from Robinett on this one track. Bassist Chris Symer also contributes a nice solo on this one, though it is not quite on the same plateau as the guitarist and pianist.

This fresh approach is heard in every track. Nothing is glossed over or given short shrift; Robinett and Gilman are so good that they even make first-rate jazz out of Henry Mancini’s Days of Wine and Roses, upping the tempo and pushing the beat on one and three throughout the first chorus, then switching to a swinging 4 underneath Robinett’s absolutely brilliant solo. He really takes off here in his three choruses, so much so that one is astonished at how different each of the three are. When Gilman enters, he clearly has his work cut out for him, yet he manages to hold his own, particularly in his second and third choruses where he almost equals Robinett’s brilliance. And even Symer is really inspired on this one!

Given the brilliance of these first three tracks, I was really looking forward to hearing some of the songs I like best, such as The Way You Look Tonight, East of the Sun and Why Do I Love You?, and I was not disappointed. The first of these takes off like a rocket and swings with an almost manic drive from start to finish. I think even Django Reinhardt would have really enjoyed what Robinett does here, and there is no higher praise from me than that. As far as I’m concerned, Django is the apex of jazz guitar, the instrument’s Art Tatum or Clifford Brown. Indeed, here Robinett again inspires Gilman to some really good playing, particularly in his first chorus, which has more than a little Bud Powell in it.

Harold Arlen, who for a white guy was an awfully good writer of jazz tunes (he had, in fact, started out as a jazz pianist in the late 1920s with a group called the Buffalodians), contributed Ill Wind which Robinett plays in a nice medium tempo groove with a bit of funk in his step. Here his solo is not quite as busy as on previous tracks, to good advantage since he puts a little “space” between his notes here and there which help kick the beat even more. Gilman throws in a quote from Mercer Ellington’s Things Ain’t What They Used to Be in his solo, which also nice space in it, and Symer plucks his bass with an unusually aggressive touch to propel the beat even more. In his last solo, Robinett and the band really kick the beat hard towards the finish line. And oh boy, do they do a number on East of the Sun, playing it medium-up with yet more of a funky kick to the beat, and Robinett’s solo is absolutely dazzling.

Bronislaw Kaper’s Invitation was not a tune I was very familiar with, but once again this band rose to the occasion. The rest of the tracks are in much the same vein: brisk tempi, inventive solos and a hard-driving beat. This is surely one of those rare albums where “conventional” jazz meets high creativity, and this marriage pays off in spades.