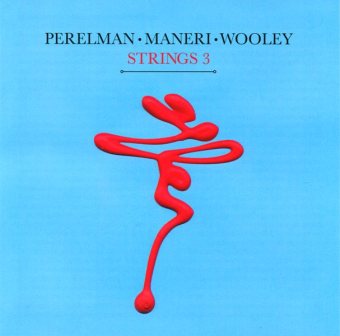 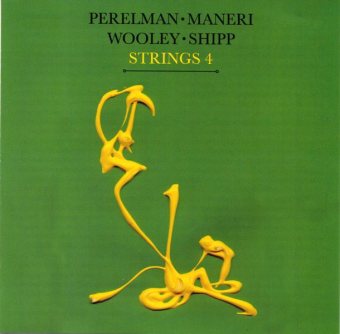 The main reason why I haven’t reviewed some of Ivo Perelman’s recordings of late—particularly, in respect to these two albums, Strings 1 & 2—it is because, to my ears, there is a point where “outside” jazz can go so far outside that it’s no longer music, but merely random sounds in approximate pitch, and that is what I heard in the first two entries in this series. But here, limiting himself to but one string (a viola) and adding both a trumpet and, on Strings 4, a piano to the mix, Perelman has managed to rein in some of his more nihilistic tendencies and return to the kind of free jazz that at least makes some kind of sense musically.

No titles are given in the above header because there are none. Each track is simply identified by its length in minutes and seconds, no more, because these are interactive improvisations among the musicians present on each date. As in the case of much such music, verbal description is difficult since each musician just throws ideas into the ether and the others respond however they feel, but what I heard in these recordings was an ingenious give-and-take in which each of the musicians really listened to what the others were playing and tried to add something in terms of overtones and chord extensions. As each piece goes along, you hear a vital and interesting interplay that somehow adds up to a composition or, perhaps more accurately, a musical composite. Even when things get really fast and a little freaky, there are only a few moments when the frenetic interplay flies out of control, and even then one can still hear an attempt at completing the musical thoughts of the other musicians. Perelman, of course, is the most outré of the musicians on here, as he normally is in any context, but the overall effect is of a ball of living twine that somehow unravels itself, twists itself into knots, and then untwists itself, repeating the process over and over and over again.

This is clearly music in the most abstract sense of the term, and yet in some places, such as the second piece on Strings 3, I also hear a certain amount of humor in their approach. The third piece on here, where they briefly sound like three drunken sailors, is a case in point. Moreover, Nate Wooley is a trumpeter who does not assert the sound of his instrument on the trio in the first disc or the quartet in the second. In fact, most of the time he adds color to the ensemble without dominating in the least, more often than not being content to add fills from behind the other two instruments. Although there are several moments in which there is a three-way conversation in Strings 3, more often than not Wooley’s trumpet is the obbligato instrument to Maneri’s and Perelman’s wilder excursions.

It clearly helps that violist Mat Maneri is the son of famed avant-garde saxist Joe Maneri, who was also famous for his ability to play coherent outside jazz. Mat Maneri has formerly collaborated with such famous modern jazz musicians as Cecil Taylor, Matthew Shipp, Gerald Cleaver, Borah Bergman, Paul Motian and his late father, who died in 2009. He frequently begins tracks with musical ideas that Maneri and Wooley then pick up, and even when it is the saxist who leads the charge, he is able to easily and quickly adapt to what is going on.

But this is, needless to say, not music for easy or passive listening. If you’re not prepared to be paying attention every second of every minute, these are clearly not CDs for you. Music that is conceived in the mind as random sparks or ideas and then translated into sound does not follow regular patterns, but if you really pay attention there are patterns nonetheless.

In Strings 4, Perelman adds a piano to the mix, and the result, particularly in the first track, reminded me of some of the free jazz experiments of Paul Bley or even Lennie Tristano. As Perelman himself says in the liner notes, having Matthew Shipp on piano turns a sculpture into a painting: “With him thrown into the package, we are suddenly a the brink of a huge space; he gives the rest of us a reference point.” And indeed he does, not just in the surprisingly slow and somewhat lyrical first piece, but also in the hyper, more energetic second. And, while I am not normally a fan of “soft” piano playing in jazz, the warmth and richness of Shipp’s playing softens the aural blows of the three very bright solo instruments. He even induces Perelman to play more often in his warm lower register than in Strings 3. Not that the music doesn’t remain strange and foreign to ears attuned only to consonant tonality and regular form, but it does add a more tonal-based reference point, particularly since Shipp plays a great many chords and does not skip around like a hyperactive butterfly on the keyboard. Indeed, his proclivity towards consonant chording, more often than not, draws the other three plays inward to his orbit rather than allowing them to dictate the form and shape of each piece.

The fourth piece on this CD, for instance, starts out like one of the wilder pieces on Strings 3 since it is played by just the viola, trumpet and tenor sax, but once Shipp enters, playing a modified boogie beat, he anchors the freneticism of the others. Almost miraculously, they start listening to him and suddenly morph into somewhat more consonant improvisation. In this track, too, Maneri sounds more like a “real” violist than in other tracks. He plays the instrument in an almost classical way rather than bowing it as if it were a small bass fiddle. On track five, the three lead instruments again begin the piece together, and here they almost make their instruments sound as if the tape were running in reverse. I wasn’t particularly pleased by one high-note scream that seemed to be out of place, but for the most part they again begin to follow Shipp once he enters, here playing just a series of single-note eighths in the right hand. Eventually, the music evolves into Shipp playing strummed chords on the piano while the other three explore upper harmonics in a somewhat wild fashion. This leads Shipp into playing high, rapid figures as well, which creates a sort of Twilight Zone feel to the music.

This sort of cat-and-mouse game continues throughout the set, the difference being that this cat (the piano) lets the mice run free even after he’s caught them. He’s a jazz cat, you see, and thus he’s more interested in where the mice are going and what kind of riffs they’re creating! And the mice are jazz mice, too, which means they’re more interested what the cat is laying down than whether or not they can get the cheese. In track 7, for instance, the jazz mice seem to be scattering all over the place, playing in atonal counterpoint to one another, but jazz cat Shipp just lays down his own reaction to the scene and joins in rather than trying to rein them in…yet they eventually come to see it his way. They jump together in a pointillistic dance of joy, and all ends happily. Maneri lays down a swinging but atonal solo to start track 8, after which the piano, sax and trumpet join in, creating a bit of jolly chaos before Shipp begins to rein them in a bit with chords. In the last track Shipp appears to give in, playing crashing chords that add to the fray rather than calm the savage mice.

There are some extraordinary moments in this set, such as the one in which the three lead instruments are all playing high, hard atonal riffs together, as if trying to create a web to catch the jazz cat in before he returns to the scene, and they almost, but not quite, succeed in doing so. Taken together—and I highly recommend that you listen, as I did, to Strings 3 & 4 back to back—these two CDs provide some extraordinary moments with only a few where the musicians seem uncertain of where they are to go next. This is truly outstanding music.