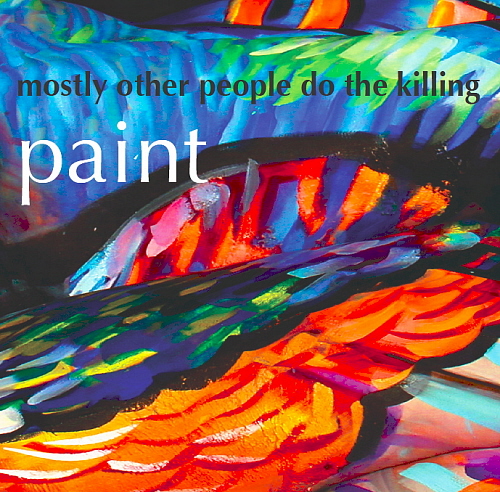 In the famed cult film Little Big Man, one of the characters is a snake oil salesman who, when first met by the main character (played by Dustin Hoffmann), is missing an eye. Every time thereafter, the guy has another body part missing: a hand, a leg, etc. I’m sure that Mostly Other People Do the Killing will get mad at me for this, but this image immediately came to mind as soon as I saw that the once full band is now down to a trio.

Of course I say this with affection because I really like MOPDtK, not to be critical, and even as a piano trio the band is as quirky as ever. One of their great strengths over the years was their ability to function as a unit. This sounds like a given or even a non sequitur; don’t all jazz bands function as a unit? Well, not exactly. You seldom have the harmonic base of a band move with the same chord changes, tempo, rhythmic accents and phrasing as the top line. It’s not really as common as you might think, but these three musicians, having been the heartbeat of the band when it was larger, are now able to show what they can do as a fully integrated entity.

You can hear this in their very first number, Yellow House, where Stabinsky’s piano leads Elliott’s bass and Shea’s drums through a veritable minefield of rhythmic and harmonic traps, only to have them stick to him like glue no matter how wild he gets or how far astray he steps. It’s not as if the tune were rhythmically so complex, either; in fact, the basic pulse is a regular 4/4, but the little “kick beat” that Stabinsky introduces right at the start and sticks with like glue makes for some interesting interplay. This ability to “hang with them” is even more important in Orangeville, which is written in 5/4. At the 1:38 mark, Stabinsky’s right hand goes absolutely wild, playing rapid, out-of-tempo frills and licks while drummer Shea is right there with him.

Black Horse, in a traditional 4/4, is an uptempo swinger that channels some of the hard bop jazz of the 1950s, except that Kevin Shea’s drumming is far more complex (and less foot-up-the-rear-end insistent) than such hard bop drummers as Art Blakey. There’s no getting around it by this time, however: this is primarily Ron Stabinsky’s album with the other two along for the ride, this despite an excellent bass solo on this track by Elliott and some nice mixing-it-up drumming from Shea in the background. I was almost taken by surprise by hearing Duke Ellington’s Blue Goose, somewhat unrecognizable without Johnny Hodges’ suave and sultry saxophone singing its way through the melody, but much to my surprise Elliott’s bass takes over that role from the bridge on through the remainder of the first chorus. Here I felt that Shea’s drumming was overly-busy and rather obtrusive; Ellington’s elegant tune doesn’t really need to be slop-bop-whack-a-mopped as heavily as this from start to finish. Take your Ritalin, Kevin!

Plum Run is pure MOPDtK madness, a romp that begins as a minor-key waltz before spilling over into wild double- and quadruple-time figures played by Stabinsky against the roiling rhythm. Green Briar, its companion piece, uses a series of repeated figures that are reharmonized differently. Tune your ears up for this one! By contrast, Golden Hill is a really pretty waltz with a definable melody, played to perfection by the trio, at least until Shea decides to become Elvin Jones in the middle of it. Ritalin, Kevin, Ritalin!

The last tune on this album, now titled Whitehall, was originally penned by Elliott under the name of Blue Goose until he learned that Ellington had already beaten him to it. It’s a good old-fashioned kind of swinger, the type of piece that almost plays itself except that Stabinsky is far from being an average jazz pianist. I also liked the way Elliott falls “into” the rhythm as if plopping into bed for a good night’s sleep—comfortable and relaxed. At 3:16 the tempo becomes rather edgier, prodded by Elliott’s bass, and Stabinsky follows his lead, playing some fairly wild and occasionally bitonal figures to contrast with the swinging 4/4 groove.

This is a fascinating album in many ways, particularly in terms of composition and Stabinsky’s always-varied approach to keyboard playing. It’s due out on October 20.