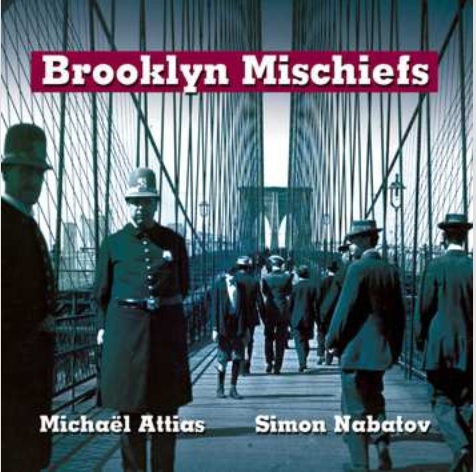 Of the latest crop of CDs I received from Leo Records to consider for review, this one was, to my ears, clearly the finest. The album title refers to the fact that these two artists first met and performed together in Brooklyn, New York one night and realized the strong affinity they had for each other.

And that affinity is clearly evident on this release. Michaël Attias is an alto sax counterpart to tenor sax legend Ivo Perelman, and on this set his playing is not only explorative and imaginative but also focused. To this extent, I also give credit to Nabatov, who introduces his own ideas for consideration by the saxist but is also happy to follow the latter whither he shall wander. In a sense, Attias and Nabatov have an affinity for each other’s ideas similar to that of Perelman with pianist Matthew Shipp, with whom he has recorded close to a dozen albums (including a couple for Leo Records). The difference is that Shipp tends to create a bit more structure into which Perelman fits his own ideas, whereas Nabatov plays less chords and more single lines; but the instant rapport between them is eerily similar. They listen to each other and try to complement each other’s excursions as best they can, and frankly, that’s all you can ask of any improvising musician.

Despite the slight differences in approach from Perelman-Shipp, Attias-Nabatov also touch base with tonality once in a while. This helps to ground the listener in what is going on and make it sound structured even when it is wholly improvised. As both Lennie Tristano, the grandfather of free jazz, and Charles Mingus, who also dabbled in it occasionally, said, “You can’t improvise on nothing.” Indeed. If there is no substance to the music the results, no matter how interesting, are bound to sound disorganized at best and cacophonous at worst. Even at their most adventurous, neither Attias nor Nabatov sound cacophonous or chaotic, and that is the essence of all good music.

Take, for instance, the opening of Gowanus By Night. Attias plays high, sustained tones on his alto, sounding almost like a harmonium, while Nabatov sprinkles a few notes here and there, occasionally plucking the inside strings of his instrument. They are focused on creating a mood, of course, but a mood that will develop into something more substantial…which they do, slowly but surely. At 2:27 Nabatov plays a surprisingly Tristano-like lick on the piano that he develops, the tempo picks up, and both of them are off to the races. A strong rhythm in 4 suddenly asserts itself and it seems as if no matter what one plays, the other has a complementary idea for it. This is the essence of great jazz, regardless of genre; it’s a tradition that goes back as far as Louis Armstrong with Earl Hines or Ornette Coleman with Charlie Haden.

Since what they are playing is often bitonal or atonal, naturally the music will not appeal to all jazz listeners, and of course there are several moments here, as in Satoko Fujii’s new album Moon on the Lake, where the music actually leans more towards contemporary classical music than to jazz, but that’s the beauty of it. Nothing is played here for ego’s sake, for showing off. At no point in this album do you feel that either artist is trying to outdo the other, in part because they realized early on that no matter what one of them played, the other could come up with a complementary idea, and this is even true of the duo at their wildest, as they are in Languid/the Spinning Song. It would be easy to dismiss what Attias, in particular, is doing here as unstructured noise, but there are notes here and they do coalesce into something phenomenal even if it seems momentarily over-the-top, and both artists are smart enough not to let that mood dominate the proceedings for too long. They pull back into quietude while continuing to create interesting shapes and sounds that have meaning. Indeed, at the 7:55 mark, Nabatov suddenly begins playing an absolutely lovely if evasive tune that could have come from Bill Evans or Jaki Byard, except that he then suddenly begins to double and quadruple the tempo and develop it in ways that Evans only did in his earlier, more experimental days. Attias picks up on this and thus, when he enters, he is fully in the mood, and it surprised even me to hear the two of them suddenly drop the tempo at exactly the same moment and indulge in a duo-improvisation that included both lyrical and rhythmic elements. There is also Glances, in which Nabatov plays the inner strings of his piano, creating a percussive sound much like musique concrete, during which Attias does not simply splatter notes against the wall to see if any of them stick but, rather, creates fascinating lines and melodic fragments over it.

Of course, I could give such details of each and every encounter in this splendid album, but in a way that’s spoiling the fun for first-time listeners. This was a miraculous encounter, and I sincerely hope that Attias and Nabatov follow up on it with more mischief in the future.