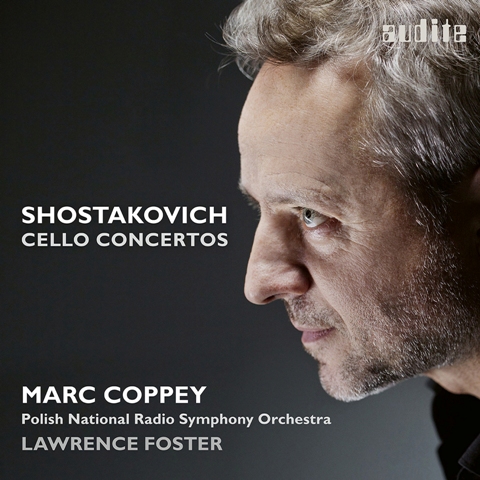 On this disc, French cellist Marc Coppey applies his talents to Shostakovich’s two Cello Concerti, both written for his friend, the great Russian cellist Mstislav Rostropovich. Thus he is tackling not only the music of a big-name composer but also, in a sense, chasing the legend of Shostakovich and his own performances of them.

This is no mean feat since Rostropovich recorded both of them in what are considered to be definitive performances. You talk about “historically-informed performance practice,” you can’t get any more authentic than listening to Rostropovich play these works, designed specifically for his strengths as a cellist.

Although he plays very well, both in terms of technique and interpretation, Coppey sounds absolutely nothing like Rostropovich. The Russian cellist had a big, rich, massive tone that was almost overwhelming in its size and depth, not to mention his depth of interpretation, whereas Coppey, like many French string players, has a compact, focused sound, much like Jean Fournier. Thus although the performances are quite good—I did enjoy them—they just lack that certain something. It’s the equivalent of having Michael Schade, for instance, a Canadian tenor with a lovely, compact tone, sing something written specifically for Jon Vickers. I hope the reader understands the analogy.

Moreover, although Lawrence Foster conducts the orchestra with tremendous vigor and insight, he does so in a Neoclassical manner than is also rather at a remove from the way Russian orchestras and conductors played behind Rostropovich. Of course, Msti also played the first concerto with Seiji Ozawa and the London Symphony in 1987 and the second concerto with Colin Davis, but both of those conductors projected more warmth than Foster.

Now, mind you, I’m not saying that these performances aren’t good. They are. But they don’t really get under the skin of the music as much as Rostropovich did. Of modern-day cellists, I could imagine Colin Carr or even perhaps Zuill Bailey playing them, but I would also want a conductor like Thomas Dausgaard or Theodore Kuchar, who project real intensity on the podium, to conduct them.

Despite Shostakovich’s signature phrases and style, these performances sound more like Stravinsky. Of course, I’m sure that Shostakovich admired Stravinsky—what 20th century composer didn’t?—but the point is that Stravinsky’s characteristic “sound” was a combination of fire and ice whereas Shostakovich’s was passion first and Katy bar the door.

To his credit, Coppey gives as much passion to the first concerto’s slow movement as he can, and I applaud him for that. It’s just not quite rich or passionate enough. Were I hearing this performance in person in the concert hall, I’m sure I’d enjoy it, but I wouldn’t go out of my way to extol its virtues to others. If asked, I would say, “He did a very credible job with it, he’s obviously a very fine and conscientious musician, but it just lacked something.”

Now, if you don’t mind having Shostakovich sound like Stravinsky, you will certainly enjoy these performances. But if you want something a little deeper, you have to go to the source.