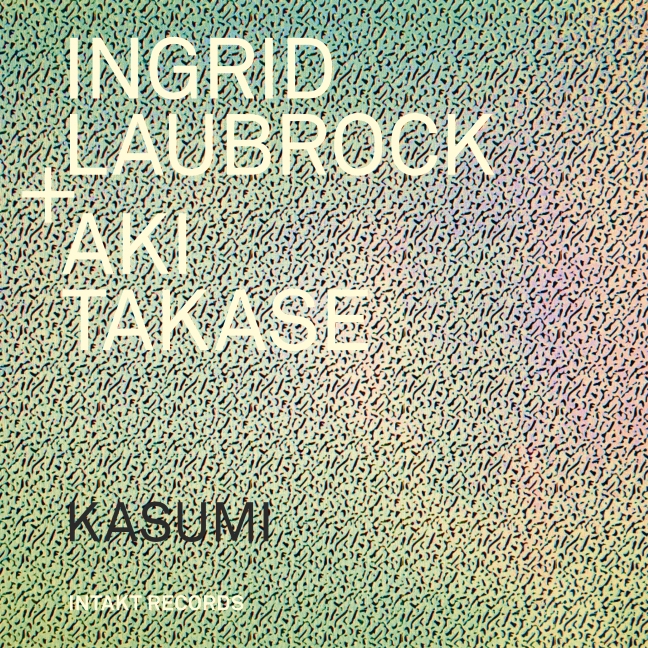 I recently tried to review a CD of another Japanese-born free jazz pianist in “dialogue” with a drummer, but although I liked the pianist’s playing very much I found the drummer to be nothing more than an insensitive basher—something akin to Spike Jones being let loose in a China shop. This, to me, was not so much a dialogue as two monologues that never communicated with one another.

On this CD, things are considerably different. Veteran Japanese-born free jazz pianist Aki Takase has been a fixture on the German jazz scene since about 1974, at which point her musical partner in this enterprise, German-born saxist Ingrid Laubrock who has lived in New York since 2008, was only four years old. But the evolution of jazz had pretty much stopped by 1974. No longer were musicians rushing from one flash point to another—collective improvisation to solo dominance, New Orleans style to Chicago and New York style, two-beat jazz to four-beat and thence to swing, bop, cool, progressive, classical-jazz and eventually free jazz and fusion—but rather had reached the point of “what next?” which has, in a sense, stagnated jazz ever since. What was once a war between the Chicago Dixielanders and the Swingers, then the Chicago Dixielanders vs. the Boppers, then everybody against cool and progressive, then all of them against free jazz and fusion has boiled down to Every School for Itself, find your own audience and let the rest of them go stew. The free jazz musicians, of which there are actually more today than there were when the genre was new, operate within their own enclave with their own discrete fans who pay little or no attention to the rest of the pack while the rest of the pack is split up into their own genres and sub-genres. There is little overlapping, and they tend not to play together if they can help it.

And it’s not just because the opening track, Kasumi, begins quietly with Takase sprinkling a few piano notes into the ether. It comes from Laubrock’s response; she is clearly listening to Takase, who takes the lead here, and even within the short duration of this track (2:02) there is a lot of quality music being produced. Not a note or gesture is wasted, and this sense of economy continues into Andalusia despite the music here being faster, edgier and more atonal. It really helps that both of these musicians have “big ears” and can respond to each other with perfect equanimity. Even Laubrock’s outside flourishes and occasional squeals on her instrument (soprano sax on this track rather than tenor)  do not detract from the complete seriousness with which both musicians approach their task. Laubrock’s tenor timbre is warm and inviting, her soprano timbre a bit harder and edgier: two sides of the same musical personality. Yet she allows Takase the honor of going off on her own for a full chorus, exploring what both of them have been talking about musically before she comes back into the conversation.

I am sure that more conservative jazz musicians, even the best of them, could follow and understand what Laubrock and Takase are doing without necessarily enjoying it. But I can sometimes enjoy both types of jazz as long as the musicians are well grounded in basics and know what they are doing. There is as much of a real dialogue going on in the work of, say. Paolo Alderighi and Stephanie Trick as there is in the work of Laubrock and Taksase on this album, and I think that if they were honest about it Laubrock and Takase could probably enjoy some of the more inventive piano-four-hands improvisations of Alderighi and Trick. Listening to this duo communicate in a somewhat amorphous piece as Chimera, where off-hand flourishes are played in the beginning in lieu of a melodic line, reminds me of the way Alderighi and Trick can suddenly, at any given flash point, take a familiar 1930s tune and turn it on its ear with substitute harmony and shifting rhythms. More conservative in form, yes, but no less creative.

The amazing thing about this CD, however, is that unlike Takase and her husband, Alexander von Schlippenbach, Takase and Laubrock do not usually play together in concert, although the publicity sheet for this album stops short of saying that this is their first musical meeting. I’m not sure if it is, but it sounds it because every moment is as fresh and inspired as two like-minded individuals who have finally met after admiring each others’ work from a distance. Just listen, for instance, to the unusual beat in Harlekin or the tenacious boogie feeling of Dark Clouds and how well they work with and around them. What started out in Kasumi and a “hello, how are you?” moment has, by this time, worked its way into a lively dialogue with a real sense of humor. They don’t just profit from playing with each other, they obviously enjoy it. It’s fun to open up to another person and not worry about having your feelings crushed by a lack of sensitivity or understanding.

By the time we reach Dark Clouds, we realize that Laubrock is sticking more often with the soprano sax. I’m not sure if it just happened that way in the recording studio or if Laubrock felt that the soprano’s higher, edgier sound matched Takase’s piano better. The most way-out track on the disc is Scurry, which is comprised of frenetic phrases played in a helter-skelter fashion. It’s also very sort, lasting only 1:27, thus it does not overstay its welcome. Laubrock returns to the tenor in Sunken Forest, a tale told mostly via innuendo and metaphor rather than in straightforward musical statements. Its strangeness reminded me of some of Monk’s music, even though Monk never wrote a truly atonal piece. In this piece, too, Laubrock allows Takase to stretch out in her solo, listening intently so that when she re-enters herself, she has an idea of how to further develop this piece—which she does.

Density is yet another somewhat fractured piece, but one played, humorously enough, to a quasi-Latin rhythm. Go figure! Despite the fractured quality of the phrases played, they somehow manage to make something substantial out of it. On the other hand, I felt that Win Some, Lose Track was the one piece on the album that didn’t work too well, which is probably why they gave it that name. The duo does indeed “lose track” of one another, going off on individual tangents with only a few good moments of pulling it together. They do get back together, however, in Takase’s whimsical composition, Poe, which has multiple atonal themes. In a way, I thought it was a mistake to program Carving Water immediately after it since the two pieces sounded so much alike that the second could have been a continuation of the first.

One Trick Paper Tiger is the next selection. Although it is resolutely atonal, there’s a different feel to it than in the previous two selections. Takase begins this one as a piano solo, taking the music into fairly dense territory before Laubrock enters, after a pause at the one-minute mark. At this point the music becomes somewhat more lyrical, with Laubrock again on tenor. Takase sets up a fairly steady beat with her left hand, playing a series of single-note figures while her right hand stabs the keyboard with occasional chords and Laubrock continues along in her more lyrical style.

The rather long and convoluted German word Luftspiegelung translates into the very simple English word Mirage. On this, the closing track of the CD, we return to the simpler, less dense territory of the opener, but by now there is no need for either musician to take the lead in order to set up a dialogue. Piano and tenor sax begin virtually together, feeling each others’ changes of chords or rhythm as the music flows along. The second half, taken at a faster pace, is no less inventive or enjoyable.

This is an outstanding CD, one that I highly recommend.