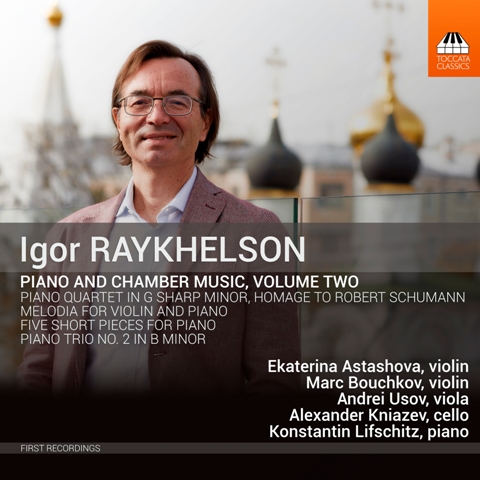 Composer Igor Rayhkelson’s music, influenced by both late-Romantic Russian classical scores and jazz, is described on the inlay of this CD as a “Rachmaninov-plays-the-blues” style. Judging from the slow opening movement of his Piano Trio No. 2, Rachmaninov may have influenced his tendency towards lyricism but clearly not his tendency to create more harmonically daring, interesting music. This movement has much more in common with Danny Elfman’s superb new Violin Concerto than it does to the old-timey style of Sergei R.

As for his “plays-the-blues” influence, this is fairly minor in this first movement, or at least it is in the hands of these very skilled but resolutely classical-minded musicians. The most famous of them is clearly Konstantin Lifschitz, a superb pianist whose work I’ve praised highly in the past, and his playing here is absolutely stupendous in its emotional drive, sensitivity and commitment, but let’s be honest: he doesn’t have a jazz sensibility. In a way, however, it doesn’t matter so much in this long (13:22) opening movement, which is full of fascinating contrasts while being built around excellent classical form. There are a couple of full stops in the music where I thought it was the end of the movement, only to be surprised a few seconds later when it took off again in a new direction. In addition to Lifschitz, violinist Marc Bouchkov and cellist Alexander Knaziev really dig in to provide a performance with remarkable frisson. Raykhelson achieves some wonderfully eerie effects by having the violinist play soft passages, occasionally, on the very edge of his strings, and when the music opens up in tempo and volume he unleashes a torrent of sound, all of which is still tightly bound to the work’s overall structure.

The Rachmaninov influence is clearly stronger in the second movement, a charming, lyrical waltz, yet even here Raykhelson introduces unusual chords and occasional edgy string tremolos to break up the mood. The fast passage, to my ears, is clearly meant to be played with a jazz swagger, but the most these musicians can muster is a ragtime bounce. But no matter: the music itself is fascinating, with constant syncopations pushing the music along except for a solo piano interlude in which the tempo is relaxed, the first of which leads to a surprisingly slow trio theme played by pizzicato strings. This has a climactic, louder section in the middle, which then leads to a sort of duo-cadenza played by the violin and cello.

The third and last movement eschews any jazz influence but begins as an edgy Allegro maestoso with moments of relaxation tossed in for contrast. The piano picks up a sort of running bass line over which the two strings play a very busy B theme, then another easing up of tempo for the trio section before moving into slower realms for the finale.

The 5 Short Pieces for Piano are pleasant fare but not particularly individual or interesting. Not really bad music, just nothing to write home about. Even Raykhelson’s first piano trio in one-movement, with several moods and leaning more towards conventional tonality than the second (and with more virtuosic passages for the pianist), is a more interesting work (see Vol. 1 of this series). The somewhat brief Melodia for violin and piano, though having more interesting harmonic changes than the piano pieces, is also relatively melodic and conventional.

The Piano Quartet, written as an homage to Robert Schumann, lies somewhere in between. The music has a bit more edge than the piano pieces or the first piano trio but only occasional moments of interesting tonality. Moreover, in this case Raykhelson’s pauses do not help in favor of the work’s construction, but rather sound more to me like affectations tossed in for effect, and the effect does not work. A lot of this score sounds like movie music to me, and I don’t mean that as a compliment.

This CD, then, is a mixed bag. After the fascinating and brilliant Piano Trio No. 2, much of the remaining music is a considerable letdown…but oh, that Piano Trio is a great one!