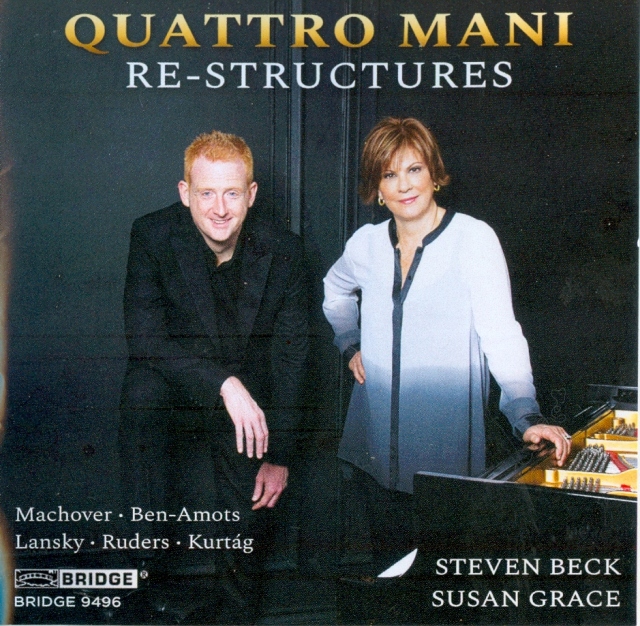 I think that, by now, my regular readers know that I’m generally allergic to duo-piano recordings as a rule. Too often I find them uninteresting, particularly when they play Romantic repertoire. Just about the only regular working duo that I really enjoyed over the years was that of Anthony Goldstone and Caroline Clemmow, which sadly came to an end this January when Goldstone died. But Quattro Mani has slowly worked their way into my favor, not just because they’re such good musicians but also because they play an adventurous repertoire.

This CD is no exception. The only two composers whose names I recognized on the CD inlay were that of György Kurtág and Ofer Ben-Amots, both of whose music I’ve generally liked, but I’m always open to musical adventures and I generally trust Quattro Mani’s taste.

We start this latest adventure with Paul Lansky’s Out of the Blue for two pianos, described by the composer as “part of a kind of musical chain letter. It’s based on the fourth movement of his horn trio, Etudes and Parodies, which was in turn inspired by Kopprasch’s exercises for horn and Ligeti’s piano prelude Fanfares. I found the music a bit in the minimalist vein, at least in terms of the continual, unvarying rhythm, but Lansky keeps the melodic line moving and introduces odd “close chords” within the piece to keep up interest.

But if you think Out of the Blue is strange, wait ‘til you hear Paul Ruders’ Cembalo d’Amore for harpsichord and piano! This is not one of the selections on which Susan Grace plays a quarter-tone piano, but you’d almost swear it was using quarter tones. The music never really settles into any firm tonality in any of its eight movements. I found the music endlessly fascinating, a sort of perpetuum mobile in which the deconstruction of the harmony actually “leads” the music melodically. The slow movement is one of the most interesting since it shows how Ruders put this music together, almost in slow motion. Ruders has created brief scalar movements that almost move like clockwork.

Unfortunately, I couldn’t make heads or tails out of Tod Machover’s Re-Structures for two pianos and live electronics. The music alternates between crushed chords and splatterings of notes that didn’t strike me as very coherent, so I will pass on to the next work.

This was Kurtág’s Életút Lebenslaud which, though very dense (both Beck and Grace play quarter-tone pianos here, and the two basset horns slighter through pitches), has a recognizable underlying structure. Because of the fluidity of pitch, the music sounds quite weird, with one of the quarter-tone pianos tuned ¼ tone below the standard A=440.

Although I’m usually a bit averse to piano tangos, Ben-Amots’ Tango for the Road, written for Quattro Mani, has unusual chromatic movement in it that delights the attentive listener. The melody sounds completely characteristic, as if it were written by Piazzolla, except with more sentimentality tossed in, particularly in the warm and relaxed second half. Quattro Mani play it as if this were their bread-and-butter repertoire, which clearly it is not. Eventually the music develops into swirling double-time figures before returning to the principal theme. It’s a delightful piece that could easily serve as an encore.

By and large, then, a very interesting disc, well worth a listen!