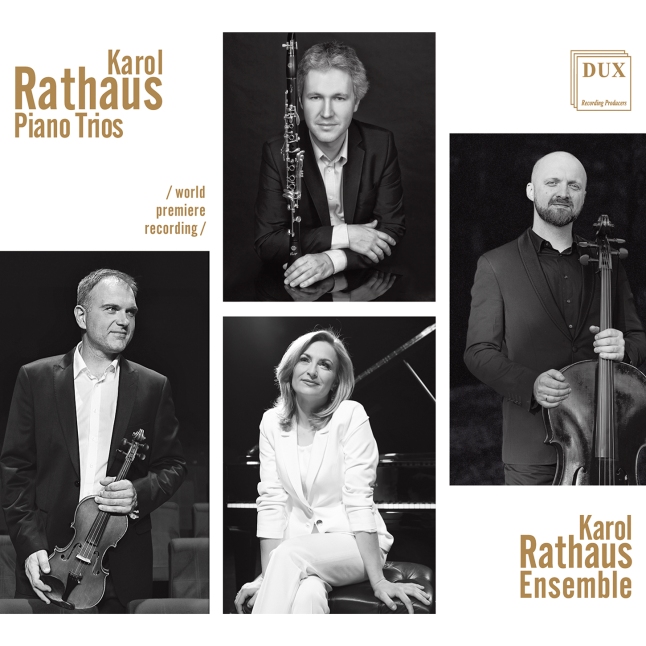 Karol Rathaus (1895-1954) is still a little-known composer nearly 70 years after his death. No one assembles Rathaus Festivals of his music, there have been no anniversary years of either his birth or death dates, and the recordings still tend to trickle out, I’d even say ooze out slowly, rather than coming in a steady stream, yet he was clearly one of the most interesting composers of his time.

Here, a talented ensemble of Polish musicians pay tribute to this unfairly ignored Austrian-Jewish composer with two of his larger chamber works and, interestingly, the first piece on this disc was one of his last, written in 1953 when he was living at Salisbury Cove, Maine. Despite the designation “Trio Serenade,” the music is in Rathaus’ bitonal, edgy style, combined with an unusual sense of lyricism and his usual tight, well organized structure. There are surprises a-plenty in this score; Rathaus was never a predictable composer, and happily this stayed with him until the end. Moreover, the three musicians involved in its performance attack the music with passion and energy galore, which helps considerably to hold one’s interest even in the softer, more lyrical moments.

The second movement is in a lively 6/8 rhythm, here played with an almost manic energy that gives the music a spiky, serrated sort of profile. The piano leads things off and then directs the strings through Ratnaus’ bitonal maze of unusual figures. The middle section is in a slow, mysterious 6/8, at times closer to a central tonality.

The Clarinet Trio, dating from 1944, opens much more lyrically and here, again, the bitonality is toned down somewhat in the first movement as all three instruments play quite lyrically for a spell. At about the 5:40 mark, the piano occasionally plays a bit more forcefully with low-range single bass notes, yet the feeling of calm is essentially maintained. The energetic second-movement “Allegro” surprisingly maintains its allusions to basic tonality despite its going ‘outside” along the edges, played at a quick clip in asymmetric meters, with the stress beats displaced almost from bar to bar (and sometimes from beat to beat). It ends abruptly with a sharp piano chord before moving into the surprisingly lyrical “Epilogue.” Rathaus wrote masterfully for the unusual combination of violin and clarinet, in a style completely different from but equally valid as Bartók’s in his Contrasts. In the Bartók work, both violin and clarinet are treated rhythmically, the former playing with a purposely rough tone in order to emulate Hungarian folk music, while Rathaus really pushes the limits of what a lyrical style can do while still being “modern” music. A fascinating piece.

This is surely one of those recordings that serious musicians will seek out and want to own. High praise goes not only to the musicians but also to the engineers, who recorded these trios with good, forward mike placement yet also with a nice natural reverb around the instruments. Very well done!