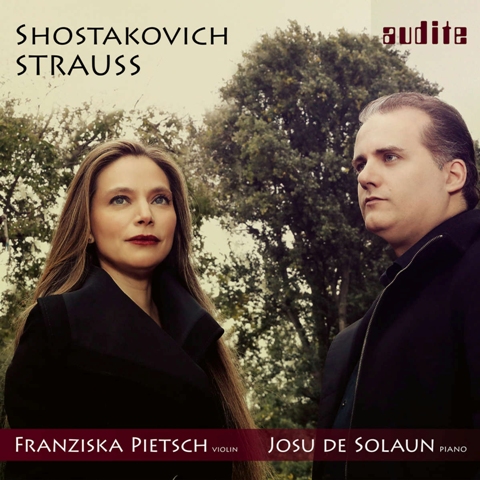 Having several recordings I wanted to review being currently unavailable for download or streaming, I thought I might sample this disc and see how Franziska Pietsch and Josu De Solaun approached the Strauss Violin Sonata, which I happen to like. I was very impressed, so I went ahead and decided to review the whole disc.

Like so many modern violinists, the German-born Pietsch plays with a bright, almost Russian sound. Apparently the warmer, thicker style of German violin playing seems to be going the way of the dinosaur; Anne-Sophie Mutter seems to be one of the last of this breed. Of course, this is not out of place in German music; even Joseph Joachim, the first of the great German violinists to leave us records, had this sort of sound although he grew up in an era when string players only used vibrato on held notes and not in technically tricky passages, unlike Fritz Kreisler and those who followed in his footsteps, but decades of great French and Russian fiddlers with leaner tones have rather spoiled us. And Pietsch is certainly an expressive player. I would put her performance of the Strauss sonata on a par with those of Ginette Neveu or Heifetz, the premiere representatives in their time of the French and Russian schools, respectively. Indeed, at times her playing put me in mind of the kind of intensity that Nadja Salerno-Sonnenberg has exhibited over lo these many decades of her storied career, and she is certainly one of my favorite violinists (I saw her in person four times and loved her in each of them).

As for de Solaun, he is also among my favorite of modern pianists. I gave a good review to his CD of Enescu pieces on Grand Piano GP707, and here he accompanies Pietsch with both tensile strength and a wonderful style. The two of them make every little detail count and stand out without unduly exaggerating anything, and their ability to work together hand-in-glove is simply astonishing. There is never a dull moment in any bar of this work, which in my view is one of Strauss’ finest pieces of his early period (1887-88). The way the duo builds the tension in the last movement is striking and unforgettable.

As for the Shostakovich sonata, this is an entirely different animal: mostly slow and melancholy, with the violinist playing very softly on the edge of the strings in the first movement. As de Solaun points out in the liner notes, the first movement actually uses the 12-tone scale, something that Shostakovich almost never did. De Solaun goes further, claiming that “the cool detachment of serialism…expresses the chiller [sic] of cold-bloodedness, the spirit of the author’s times.” This was a Cold War sonata, written in 1968 and dedicated to David Oistrakh on the occasion of his 60th birthday. Again, to quote De Solaun, “Shostakovich was a completely broken man. He no longer could play the piano due to a debilitating condition in his right hand (poliomyelitis), he had already suffered two heart attacks, several falls in which he broke both legs, a looming lung cancer due to his addiction to cigarettes, and he had been both celebrated but also censored and denounced by the Soviet government.”

But what I liked most about the work is that, for all its inherent sadness, the music is not dripping in bathos as so many of his works did. He seems to have internalized his gloom and thus transformed it somewhat. The piece has strong ties in its method of writing (except for the 12-tone scale) to many of his string quartets, which I also like. Oistrakh left us a powerful performance of this sonata from 1969 with long-time friend Sviatoslav Richter at the piano. De Solaun does not opt here for Richter’s powerful, almost granitic style of playing, but he doesn’t need to; what he gives us is emotional enough without going over the top, and Pietsch is right there with him. The fast second movement uses a great deal of chromatic movement but is not written as serial music, and has a stronger Russian character in its powerful Slavic rhythms. Here, both musicians pull out all the stops, with Pietsch attacking her strings with strong, edgy bowing and De Solaun doing a pretty good Richter imitation.

Though the final movement is marked “Largo – Andante,” tempo is not everything. It opens with a powerful statement, played forte, by the duo before the piano drops out, allowing the violin to state the theme pizzicato before stealthily moving back in with ominously stomping single bass notes, then it’s the violin that falls away while the piano plays a melancholy, very Russian theme to which the former adds its own counter-lines. This is played with a great deal of heart by the duo, which makes an indelible impression on the listener. Just before the five-minute mark, we’re suddenly in another world and another theme, this time in C major but with interesting harmonic changes. At 6:53 a gentle Slavic rhythm comes into the picture, played by the pianist, while the violinist plays a legato melody above it before moving into a double-time eighth-note theme. This eventually moves into very impassioned music at a louder volume for both soloists which builds to a tremendous climax before again falling back into a quieter, less frantic space.

Clearly, this is a powerful and interesting disc, and I hope it gets wide attention.