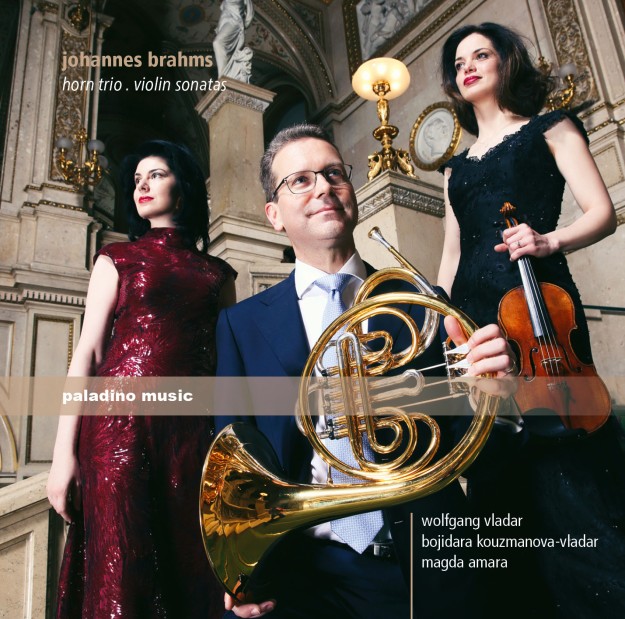 It is always with a certain sense of trepidation nowadays that I approach new recordings of old chamber music because of the almost insane fetish most young performers have with Straight Tone and the Religion of “letting the music speak for itself,” which generally means playing everything in a flat, non-inflected manner that is the aural equivalent of flat soda pop. Thus I first downloaded just the first movement of the Horn Trio from this album to give it a listen.

Needless to say, I was impressed. I am impressed.

Not in a long time have I heard three such musicians “let the music speak for itself” and still have the sensitivity and intelligence to bring out the colors and contours of the scores with such vibrant sensitivity. Here are three musicians playing together who don’t even have a formal name for their trio, although I suspect that the violinist and hornist are married to each other, yet who approach the music of Brahms with a splendid combination of no-nonsense, bracing post-modernism and old-fashioned values like phrasing, rubato, and a wonderful use of dynamics. For the record, Kouzmanova-Vladar doesn’t play with straight tone but with a very light, tight vibrato, which is historically correct for this music. Hornist Vladar has a lovely tone that is pointed and compact (he studied with the legendary Roland Berger, who led the Vienna Philharmonic horn section for decades), again historically right. Too many modern-day French hornists play this music (and other pieces from the same era or earlier) with the big, bloated instruments of today, which are designed to cut through a 120-piece band and whoop it up in Wagner. That doesn’t work for me, and it certainly doesn’t work for Brahms.

But this does work. They tear into the first movement of the Horn Trio, a fiendishly difficult piece to bring off as attested to by the large number of failed recordings (including one with Dennis Brain and two drips appropriately named Salpeter and Preedy, and Alan Civil with Yehudi and Hephzibah Menuhin), as if they couldn’t wait to play it. The whole movement has that kind of breathless thrill one gets from playing a piece one really loves for the first time, and they continue this feeling throughout the entire work. Just listen to that second movement, where Kouzmanova-Vladar’s bow fairly bounces off the strings…she’s enjoying it so much she can scarcely contain herself. And the others fall in line with her, Amara responding in the repeat of the opening theme with some rich, deep-in-the-keys playing, the enthusiasm building as they go through the movement. Brava and bravo, ladies and gentleman! Well done! It’s the kind of performance that’s so good you almost can’t wait to hear how they do each succeeding movement.

Moreover, the violin-piano duo from this group does an equally impressive job with the violin sonatas. Listening to No. 1, I was reminded of the Adolph Busch-Rudolf Serkin recording, except that Kouzmanova-Vladar’s tone is sweeter and more ingratiating. And listen to the way she “leans into” certain notes for stress value; this is first-class musicianship! She makes the whole sonata come alive in a way I’ve seldom if ever heard before.

And if you think the first sonata is good, listen to the way they tear into the Third. This has the same fire and energy as their playing in the Horn Trio; Kouzmanova-Vladar shows herself here to be a master of color, producing sounds on her violin ranging all the way from a breathless whisper (surprisingly sexy in its own way) to a fiery forte, with all manner of variations in between. And Amara, a professor of piano at the Vienna Music Academy, shows you why she won such a prestigious position at such a young age. The two of them are as potent a duo as Nadja Salerno-Sonnenberg and Anne-Maria McDermott were back in the early 2000s.

This is the kind of Brahms that Brahms himself would have loved. I say this because I know how much he adored the fiery yet sensitive playing of young Bronislaw Huberman, who Kouzmanova-Vladar resembles to some extent (although she doesn’t employ the portamento he used so well). If you even like Brahms a little, this is one disc that has to be in your collection. Wow!

One thought on “Kick-Butt Brahms From Vladar, Kouzmanova-Vladar & Amara”