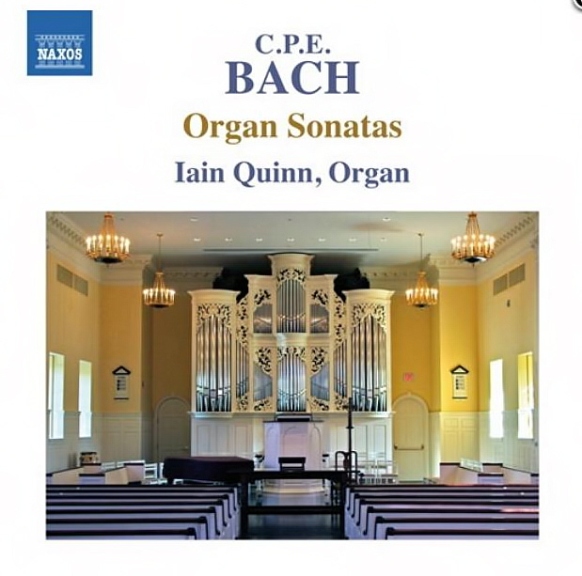 According to the liner notes for this record—and before I quote them, I am going to make a personal caveat that the author does not present any proof and therefore her words may not have any validity regarding this topic—Caroline Wright speculates the following:

While his father’s prowess as an organist was legendary—in 1751, a year after J.S. Bach’s death, Georg Philipp Telemann lamented, “Departed Bach! Long since your splendid organ-playing / Alone brought you the noble cognomen ‘The Great’”—C.P.E. Bach may not have been quite so skilled. Confessing to Charles Burney in 1772 that he was so out of practice he had “lost the use of the pedals,” he seems not to have been a virtuoso in the manner of Johann Sebastian. Instead, he was better known for his performances on the other (stringed) keyboard instruments, and especially the clavichord. Perhaps this is why he wrote relatively little music for the organ: the Wq 70 set (comprising five sonatas and a D major prelude) as well as a handful of fugues and chorales are his only words explicitly for the instrument. That said, much of his keyboard music works equally well on the organ as on stringed alternatives such as the harpsichord or clavichord.

Let us analyze the above paragraph in the face of what we know about C.P.E. Bach as well as his older brother, Wilhelm Friedemann, who was by all accounts an organist on the same level of his father. The bald fact is that long-term organist posts at German churches, like the one J.S. Bach had at Leipzig, didn’t exactly grow on trees, particularly in the late 18th century. W.F. Bach had a terrible time finding a position, despite his pedigree plus the fact that his godfather had written him a glowing letter of recommendation. And who was his godfather? Why, G.P. Telemann, of course, so with that in mind some of his effusive praise might be taken with a grain of salt. Remember, “J.D. Power & Associates” highly ranks Quicken Loans here in the U.S., because both are part of the same banking corporation.

But look at the other facts. C.P.E. Bach neither tried to find a gig as an organist nor had one. He worked for nearly 30 years in the court of the flute-playing King Frederick the Great, where his job (along with that of his co-employee, Quantz) was primarily to write flute pieces for his employer and clavichord pieces for himself to play for Frederick. The only reason the Wq 70 sonatas were composed at all was because in that year, 1755, the princess had a new organ built for her with a very wide range of stops. Since Frederick knew very well that Bach’s father was a fine organist—old J.S. made the trek to visit his son at Frederick’s court, which visit eventually resulted in the Musical Offering composed for Frederick—C.P.E, not Quantz, was assigned the task of writing these sonatas for her.

And what music it is! Here is the wildly inventive, musically daring Bach of the Hamburg years in full bloom at an earlier period of time. These sonatas are simply astonishing: flamboyant and flashy, harmonically advanced, using a wide variety of stops for color and his now-familiar style of disguising the melodic line in ornamentation and unusual shifts of rhythm. In the third movement of the Wq 70/6 sonata, for instance, Bach changes the stops twice in the course of a few seconds’ worth of staccato chords at around the 2:35 mark, and this movement is also full of strange little luftpausen to catch the listener’s attention to the musical surroundings. Another good example is the first movement of the Wq 70/4 sonata, in which Bach uses unusual scalar passages which alternate between the major and the minor, quite daring for its time. They are about as far in style from the organ music of his father as Beethoven’s piano sonatas were from Mozart’s.

The Princess Royal must have been quite a spectacular organist in her own right, because these are NOT easy pieces to play, and it is to Iain Quinn’s credit that he plays them with relish and enthusiasm. He obviously loves these sonatas as much as I did hearing them. Quinn reminds me of the greatest church organist I ever heard play live, David Drinkwater at Kirkpatrick Chapel on the campus of Rutgers University back in the 1970s. (I sometimes just hung around when Drinkwater was practicing because he was so much fun to hear.) Incidentally, the instrument Drinkwater played was a classic Aeolian-Skinner pipe organ, just like the one they had at Wanamaker’s Department Store in Philadelphia back in the 1920s and ‘30s (Rutgers replaced it in 2013 with an electronic instrument). On this recording, Quinn uses a much smaller organ from the same state, New Jersey, the one at the Theological Seminary in Princeton, New Jersey. (Yes, I used to go to Princeton, too, but only to the book and record stores there, never to the Theological Seminary, so I cannot claim any first-hand knowledge of this instrument.) Small as it is (note the photo on the front cover), almost like a pocket-sized organ compared to the massive Rutgers instrument with pipes installed in the walls that went up damn near thirty feet, this organ has a wonderful range of colors which Quinn exploits with skill and imagination.

I can’t say enough about this album. It is absolutely one of the most fun discs of organ music you are likely to hear, particularly from this period of music history. If you enjoy organ music and/or C.P.E. Bach, you’ll love this disc!