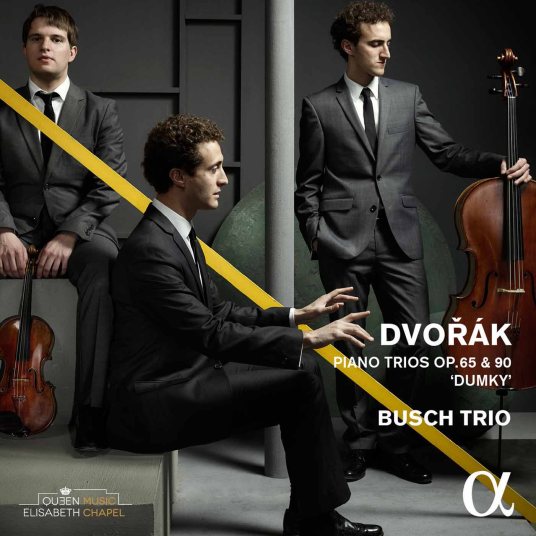 Although I admit that it’s very hard to play these superb trios by Antonin Dvořák badly—unless, I suppose, you really have no musical sense at all—it is not always easy for modern chamber groups to get into them as well as the Busch Trio does here. Indeed, the only other recording of these works I’ve heard that are as good as these are the ones by the equally wonderful Trio Solisti on Bridge 9393. At first hearing, it seemed to me that where Trio Solisti played with more “Romantic” touches—i.e., rubato, rallentando, etc.—the Busch Trio played in a more direct fashion, but as the performances progressed I realized that my ears were deceiving me. In fact, the Busch Trio takes these works at a consistently slower pace than Trio Solisti, as the following track-by-track timing comparisons will show:

So what’s the difference? Doing an A-B comparison, I discovered that Trio Solisti played with a richer tone in the strings whereas the Busch Trio played with a leaner sound. Also, in movements where Trio Solisti did indeed introduce slight tempo modifications, the Busch Trio played the music “straighter” but also slower. This allows the listener to “catch up” with the many and varied chord changes and musical developments in each movement a bit easier, but no less dynamically or excitingly. These are, quit simply, stupendous performances (like Trio Solisti’s) of almost overwhelming emotional power.

The other difference, which makes sense when you consider the trio’s namesake, violinist Adolf Busch, is that the string players here use a leaner, faster vibrato. This is one of the things that creates the illusion of quickness when in fact the tempos are quite moderate. For those who don’t know him at all, and I’ll bet there are millions who have never heard him play, Adolf Busch (1891-1952) was the leader of a famed string quartet in Germany who, like his conductor-brother Fritz, fled Germany after the Nazis assumed power in 1933. Adolf Busch’s own sound was extremely lean, at times almost vibratoless as per our modern-day HIP movement, which sometimes gave his violin an almost whiny quality on the old 78-rpm records. In 1939, following the Nazi invasion of Austria the previous year, Adolf Busch relocated to Switzerland where, among other activities, he worked as first violinist in the newly-formed Lucerne Festival Orchestra which, like the Palestine Symphony, was made up of refugee artists from Nazi-occupied territories.

This trio consists of Mathieu van Bellen, who gave the trio its name because he plays Adolf Busch’s own 1783 Guadagnini violin, cellist Ori Epstein and pianist Omri Epstein. The group members were all trained initially as soloists in Great Britain in 2002, formed the trio as a professional unit in 2012, was mentored by Chamber Studio in 2014 (where they met Eberhard Feltz and András Schiff), and became Artists-in-Residence at the Queen Elizabeth Music Chapel in 2015.

Busch’s own playing, like van Bellen’s, was characterized by a resolutely modern sound and approach to the old Romantic repertoire. Busch used portamento, which was considered a sign of cultivated playing, very sparsely. On these performances, van Bellen uses a downward portamento at 8:50 in the last movement of Trio No. 3 and 4:02 in the fourth movement of Trio No. 4, but not much elsewhere. Cellist Ori Epstein uses a lighter, subtler portamento just as sparingly. If I had to point to one feature of this trio that is more “Romantic” than Trio Solisti, it would be the warmer, more relaxed playing of pianist Omri Epstein. He’s a bit more like Arthur Rubinstein than like most other modern chamber pianists, Trio Solisti’s Jon Klibonoff among them. Epstein’s warm, rich tone and fluid phrasing offset the leaner musical approach of the strings in an interesting and arresting manner.

Of the two trios on this disc, I felt that the six-movement “Dumky” trio (No. 4) came off somewhat less dynamically than No. 3. Here, the group’s slower tempi allowed the structure to relax a bit more than it should. Individual movements were extremely beautiful, thus I wouldn’t like to criticize their approach too harshly, but I personally preferred the tauter approach of Trio Solisti. Otherwise, it’s an outstanding disc and highly recommended.

This is the first issue of what Alpha promises to be Dvořák’s complete piano trios, quartets and quintets. I wasn’t sure if the future releases would be played by an augmented Busch Trio or by some other chamber group(s), but happily Omri Epstein sent me an email and confirmed that it would indeed be they who complete the project…so stay tuned!

From Baroque to Bop and Beyond: An extended and detailed guide to the intersection of classical music and jazz