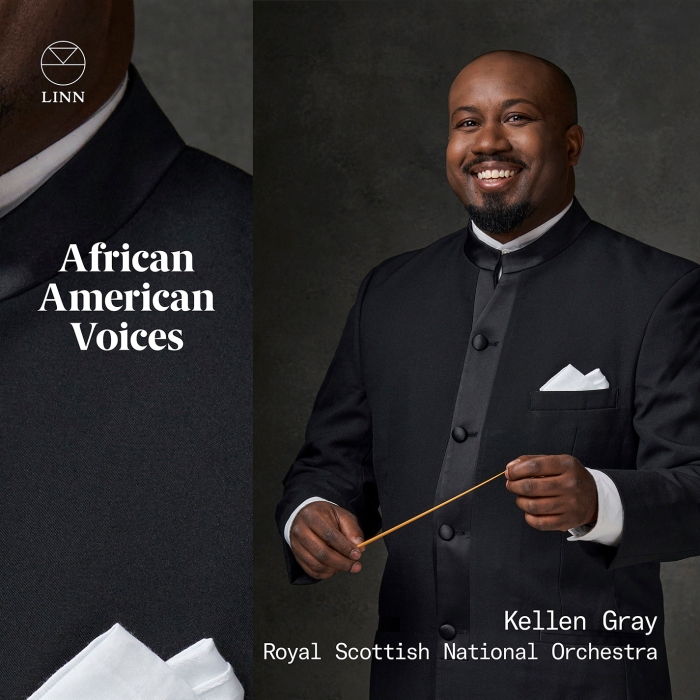 And here, on the heels of Franz Welser-Most’s traversal of orchestral music by George Walker, is an excellent album of music by black American composers which includes yet another piece by Walker…and, happily, does not include music by Florence B. Price!! (For those who missed my comments on Price, she was a solid, professional writer of late Romantic pieces that have neither originality nor inspiration to commend them.) In fact, I was quite gratified to see a symphony here by William Levi Dawson, too often ignored in the pantheon of black composers, in addition to William Grant Still’s excellent and deeply moving “Afro-American” Symphony.

Since conductor Kellen Gray is an African-American (in addition to his post as Assistant Conductor of the Royal Scottish NO, he is also Associate Conductor of the Charleston Symphony), I expected him to have a firm grasp on how this music should go, and he did not fail me. Moreover, in addition to getting the rhythmic feeling and flow of this music right, he also has a firm grasp of musical structure, thus he is able to pull the diverse sections of these works together to produce a unified whole.

Since Dawson’s is a Negro FOLK Symphony, he used simple themes taken from various work songs, spirituals etc., but in doing so he transformed them through his musical imagination, often using snippets and tying them together. Sad to say, this is exactly the kind of musical imagination that Florence Price did not have. Between Dawson’s musical structure and the way in which Gray conducts it, this symphony emerges for the listener as a close cousin of Antonin Dvořák’s “New World” Symphony (No. 9), and that is a compliment to both composers. (In fact, there’s a short theme in the third movement of the Dawson symphony that sounds very much like a similar theme in the first movement of the Dvořák.) Written in 1934, it was lucky enough to be premiered by the Philadelphia Orchestra under its then-music director, Leopold Stokowski, who later recorded it for Decca with his American Symphony Orchestra. Although Stokowski gave it all he had and managed to elicit some wonderfully detailed playing from his orchestra, he (and they) didn’t get the rhythms quite right. Gray and his orchestra do. But the one thing I liked about the Stokie recording was its clear, crisp sonics. Linn Records gave Gray and the Royal Scottish Orchestra s bit too much reverb, which somewhat dulls the impact. But make no mistake, this is a great performance of the work. I .like it even a bit more than the surprisingly good one by Arthur Fagen and the ORF Vienna Radio Symphony Orchestra on Naxos.

Walker’s Lyric for Strings was, like Samuel Barber’s Adagio for Strings, originally the movement of a string quartet. Written in 1946 when Walker was still a graduate student at the Curtis Institute of Music, he later reworked it for a full string orchestra and gave it its present title. Although it is unlike most of Walker’s later music in that it is resolutely tonal in every respect, including the use of a late-Romantic-sounding melodic line, there are elements of sadness and longing in it, too.  In act, I would go so far as to say that it is a much more diverse and interesting work than the Barber Adagio, even though its theme is not as memorable. Once again, Gray invests a great deal of feeling and energy into this piece.

In my profile on Still, I noted—and still maintain—that one of the reasons why he is not better recognized as a great composer or played more often than he is is because most conductors simply don’t have the right “feel” for his music. Still was inspired by the black music he heard around him as a child and an adolescent—church music, the blues, and jazz—all of which had the loose syncopation, the almost “sliding” sort of rhythm which was a part of that music but not part of the mainstream classical experience. Before hearing Gray’s performance of this work, the only one to have the right swagger was a performance by the New Trier High School Symphony conducted by Peter Rosheger. The Scottish National Orchestra comes very close to getting the feeling of the score right; to my ears, it was just a shade too fast. A little more of a “slow drag” feel, and it would have been perfect, but from a technical standpoint, of course, it’s much better played than the Rosheger version. Perhaps someday we’ll get a recording of Still’s magnum opus, Africa, that sounds as it is supposed to from start to finish.

If I have perhaps made a bit too much of Mr. Gray’s heritage, rest assured that I only brought it up because I felt (rightly) that he would have an affinity for this music, just as Czech or Hungarian conductors generally have the right feel for their native composers. I would most assuredly like to hear Gray conduct other works, hopefully some modern ones…but then again, I’m always hoping that conductors nowadays would program more modern music! Still, this is an excellent CD. For those who don’t have at least two of the three works presented here, I would say it’s a must CD to have.