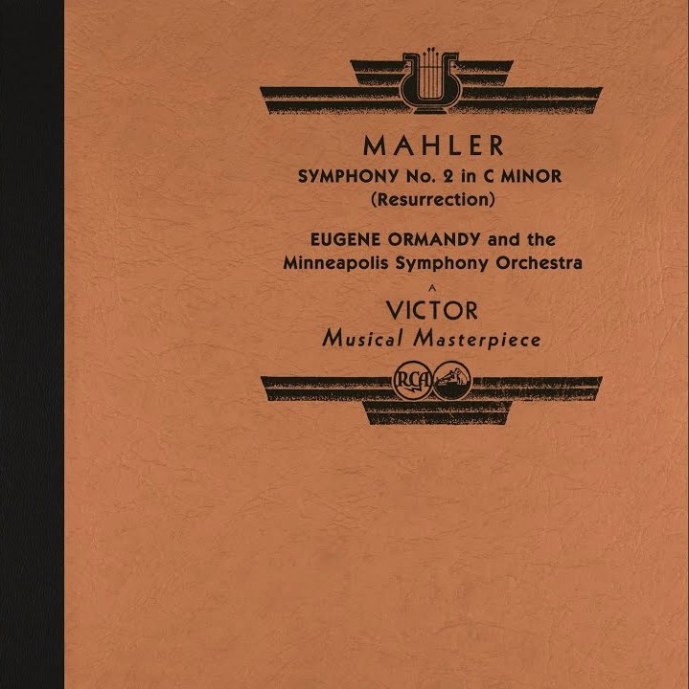 This now-legendary recording, originally issued in the depths of the Depression on 22 sides (11 records) in a massive 78-rpm album that weighed about five pounds, is now finally available on an easy-to-locate domestic CD taken from the original masters…and it has just been sneaked out, with no promotion, almost as if Sony was embarrassed to do so. It was previously issued by Brilliant Classics, a transfer apparently made from somewhat worn and defective copies, as well as by Biddulph from near-mint-condition 78s, but finding the Biddulph CD is difficult and owning it is even harder. I just saw a copy going by on Amazon for $57. This one is far less expensive than that. (It also apparently came out in a 10-CD set on the Documents label in 2007.) When the recordings were first released, the music was faded out at the end of each side and then faded in again at the beginning of the next one, a practice that Victor used briefly in 1935, but when the album was reissued with a different cover around 1940, they corrected this. 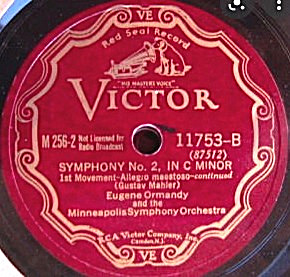 The symphony was recorded live at a concert in the Cyrus Northrup Auditorium in Minneapolis on January 6, 1935, with sides 1 and 16 being re-recorded the next day to replace significant errors in the original. One commentator on Amazon claims that this was done to take advantage of a union contract that allowed RCA to record a live concert at a much lower rate than a studio recording, which is probably true, but I doubt the following comment that “Ormandy noticed this clause and alerted RCA Victor to its possibilities” since the label did the same thing with Leopold Stokowski’s 1932 concert performance of Schoenberg’s Gurre-Lieder—in fact, they actually recorded two complete performances of the latter and then chose the best takes from each concert. Ormandy, who was scarcely known at the time, and the Minneapolis (now Minnesota) Orchestra, which was considered an also-ran, just had the one concert recorded. 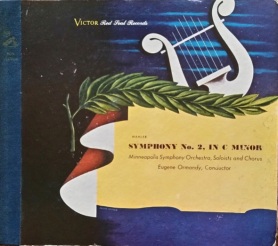 Interestingly, despite Ormandy’s initial enthusiasm for the set, in later years he said that he was against live recordings because they don’t show an artist at his best. That’s true here for the orchestra, but not for the overall excitement of the performance. The Minneapolis Symphony of that time obvious flub a few notes, but the amazing thing is how much they get right, not wrong. This performance has an electricity about it that Ormandy could rekindle once in a while in his later years, but not that often, and although his later Philadelphia Orchestra recording of this symphony is very good, it doesn’t hold a candle to this one in terms of excitement. In fact, it is even more exciting than the original 1923 acoustic recording of the symphony by Oskar Fried.

Those familiar with Ormandy’s Mahler will of course realize that he preferred brisk tempi to slow ones. After all, he was a Hungarian, and Hungarians generally conduct music quickly. Yet he does not ignore some of the niceties of the score, such as the rubato effects in the first movement. It’s just not Bruno Walter’s or Leif Segerstam’s Mahler.

He was also very fortunate to find two local soloists who had excellent voices. I’ve heard many a “modern” recording of this symphony—and by modern I mean going back to the late 1970s—in which either the soprano or the contralto has an infirm or strained voice. Sadly, both Connie Frank Bowers and Anne O’Malley Gallogly have sunk into oblivion; except for links to this recording, they aren’t even a blip on the Internet.

One thing I particularly like about this recording is that it gives you the chance to hear Mahler played by single F and Bb horns, the kind of horns that the composer wrote for and whose sound he knew well. They have a timbre much closer to that of a hunting horn than today’s hybrid monsters with their massive but somewhat over-mellow sound, so in a way this is an historically-informed recording. Only the soft entrance of the chorus is not well recorded; for the first few notes, they sound slightly muffled, their sound unfortunately covered a bit by the original surface noise which, when stripped away as it is here, has a slight effect on the sound. But of course Sony Classical has much better, more expensive and more sensitive equipment to work with than I do, thus I’m more than happy to accept this momentary lapse in a recording that is otherwise crystal-clear and free of surface noise, clicks, pops and other artifacts of the shellac originals.

Naturally, the pre-high fidelity sound with its somewhat constricted dynamic range makes this a supplementary Mahler Second and not a first choice, but I don’t think you’ll find a more exciting version anywhere except, perhaps, for Klaus Tennstedt’s last performance with the London Philharmonic, which is taken at a much slower tempo. Yet I think it should be in the collection of every Mahler lover for its historic value as well as its emotional impact. Taken on its own merits, this is a wonderfully vibrant and exciting performance, one not to be dismissed lightly.