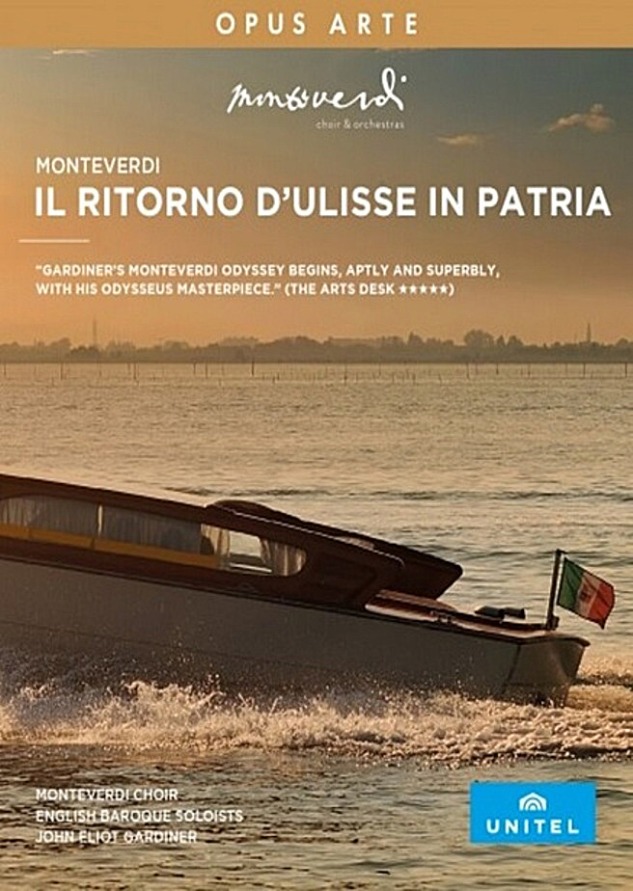 This, the third installment in John Eliot Gardiner’s Monteverdi opera trilogy, was the one I most wanted to hear, since none of the available CD or YouTube video performances seemed really good enough to me. I once owned a now-ancient production on DVD from back in the 1970s, with the great Janet Baker as Penelope, but except for her singing there wasn’t much to write home about. After characters made their entrance, they just stood there like statues and sang. When he finally appeared, Ulysses looked like the movie images of Moses, and the orchestra was so heavy that they sounded like 101 Strings.

The recording I have, simply by default, is the one conducted by Gabriel Garrido with Gloria Banditelli as Penelope, Maria Cristina Kiehr as Minerva and Fortuna, Guillemette Laurens as Melanto, Mario Cecchetti as Eurimaco and the same singer on this DVD, Furio Zanasi, as Ulisse. Some of the singers are really involved in their roles, but a lot aren’t.

In this performance, mezzo-soprano Lucile Richardot, a name new to me, is the Penelope, and she has all the drama of Baker with a more beautiful timbre (Dame Janet’s voice, like that of the legendary Pauline Viardot-Garcia, had what you would call a “bitter orange” sound), and John Eliot Gardiner’s English Baroque soloists, though having a somewhat more generic and less characterful sound than Garrido’s Ensemble Elyma, is recorded much better, thus able to project some exquisite dynamics shadings in their playing that Garrido could only hint at. The rest of the cast is, to my ears, vocally excellent (as were Garrido’s singers), but often more varied in their word-coloring and interpretation. Zanasi’s voice, though not as fresh as on the old Garrido recording, is still a firm and lovely one, and his interpretation of Ulisse has, if anything, grown in subtlety and stature. I do question, however, the voice-range designations of some of these singers; John Taylor Ward, our Giove (Jupiter), is supposedly a bass-baritone (I looked him up online), but to be honest he sounds more like a “baritenor,” one of those voices with a lyric baritone’s range but more of a tenor timbre. (His few attempts at bass low notes are, well, not all that great; he just croaks them out.) Musically and vocally, then, this is a crisp, dramatic and well-nuanced performance of the opera, overall the best I’ve heard. On those grounds alone, I highly recommend it.

The stage production was put together by Gardiner and Elsa Rooke. All the singers are in modern street clothes, there really aren’t any stage sets but rather a bit of furniture with a staircase in the middle, and both Gardiner (front and center) and the orchestra (seated on either side of him) are right up there on stage as the singing actors work around them. The results, if nothing much to write home about, are far superior to the usual over-the-top productions we get nowadays. With a real musician in charge who has respect for Monteverdi and apparently thinks about as much of Regietheater as I do, Gardiner has pared down the stage action to essentials, knowing full well that this is a very intimate work—even more intimate than L’Orfeo, and also much longer (three hours)—and thus not the sort of thing that will move an audience with brainless idiots, naked nuns or Nazis running around the stage. In short, it’s a very good production which puts Monteverdi’s music first, a bit of interaction between principals when needed and appropriate, and thus focuses on essentials. Another thing I liked was that nearly all the singers, even the falsetto “countertenors” (a voice type that, of course, didn’t exist in the 17th or 18th centuries), gave their all dramatically. This is of paramount importance in a static work like Ritorno d’Ulisse, which, if you had written it today, would clearly be called a chamber opera. It only plays well on an intimate scale so that the audience can pay their undivided attention to the drama, and that’s what we get here.

Since I don’t have a Dolby Surround Sound system to play my DVDs on (although I do have Klipsch IHX computer speakers, a really top-of-the-line brand for listening), I can’t say how it might sound on your high-end configuration, but what I heard was exceptionally fine, better and more realistic sound than any CD I’ve heard of this opera. All in all, then, I was actually quite happy that I chose to review this production. It’s simple, direct, well sung, acted and conducted, and for once Monteverdi and not some moronic stage director’s bad nightmare took precedence. Highly recommended.