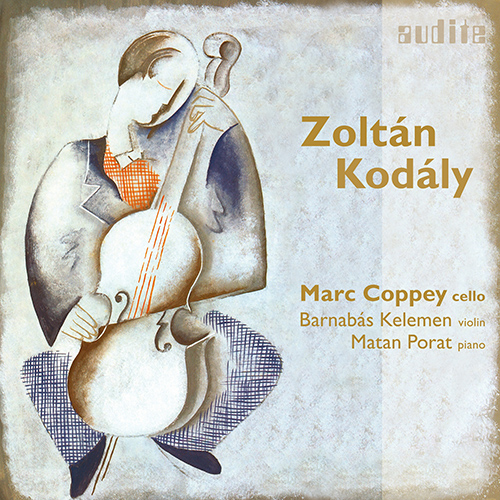 This new release practically duplicates, work for work, the album released by cellist István Várdai on Brilliant Classics in 2017, a recording I reviewed in January 2018. Much to my surprise, considering the fact that Várdai is Hungarian and Coppey is French, the latter really “gets” this music in the same gutsy, energetic style.

And, to be honest, Coppey has the better tone: rich, deep and full, much like that of one of my idols, British cellist Colin Carr, whereas Várdai plays with a good but leaner sound. Of course, that in itself would not be a recommendation for this recording if Coppey lacked Várdai’s intensity, but he does not.

Moreover, Coppey’s richer tonal palette allows him to access a greater range of sounds and colors from his instrument. Another thing that works in his favor is the sound quality. Coppey’s recording has a light amount of room ambience around his instrument, which gives it great presence (why, oh why can’t Colin Carr be recorded this well??), whereas Várdai has somewhat more echo around his instrument. And yes, this affects the emotional impact of the music on the listener.

In the Cello Sonata, Coppey is joined by pianist Matan Porat, who plays with a bright, silvery tone rather than a rich, full one, but he equals Coppey in intensity and phrasing so his contribution matches the mood of the music.

The big difference between Várdai’s recital and Coppey’s is that the former gave you the Capriccio for solo cello and the Adagio for cello and piano whereas the latter gives you the Duo for Violin & Cello, one of Kodály’s major works for the instrument and not one frequently recorded. Barnabás Kelemen, a violinist I’ve heard before, also plays with a very bright tone, which is historically and ethnically correct—think of Hungarian violinist Joseph Szigeti as a good example—and he, too matches the cellist in playing with fire and intensity in every note. This is a fascinating work in which Kodály manages his themes with extraordinary skill, balancing and contrasting moods, tempi and dynamics to produce what almost sounds like a chamber music reduction of an orchestral score.

This now my go-to recording of these pieces. As good as Várdai was, Coppey outstrips him.