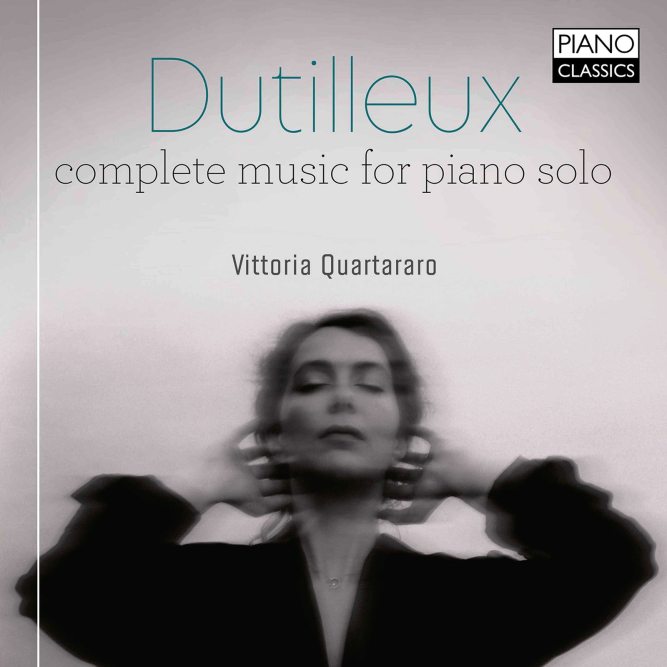 Pianist Vittoria Quarteraro, who received her training in both her native Italy and in Germany, where she now lives, presents here the complete piano music of one of the most respected French composers of the 20th century, Henri Dutilleux, with this recording of his complete piano music.

Despite his high reputation, Dutilleux’s output was relatively small, particularly considering the fact that he lived to age 97. His orchestral works were particularly championed by conductor Charles Munch, who became a personal friend. Wikipedia claims that his music was in the tradition of Ravel and Debussy, but also of Albert Roussel and Olivier Messiaen whose work was decidedly more complex in harmony than Ravel and Debussy, but that he had his own “idiosyncratic style.”

Quarteraro definitely plays his music as if it were part of the French impressionist school, using a lot of pedal and purposely blurring some of the fast runs to create a sort of ambient sound; but Dutilleux’s music was too complex both melodically and harmonically to fit into the “ambient classical” school that is all the rage today. It was, however, clearer and less congested than that of Messiaen, who was his slightly older (by eight years) contemporary. Both composers tended to write music that was much more abstract than their French predecessors, but whereas Messiaen worked in small cells of music, little outbursts that the listener had to thread together in his or her mind, Dutilleux wrote in a more linear fashion. Although his rhythms are irregular and sometimes asymmetric, they are present underneath the complex top lines and thus they give less musically sophisticated listeners something to follow as the music progresses. With that being said, Dutilleux’s music did not flow freely; he often used pauses, and his tempo sometimes shifted as quickly as the meter, which can disorient a casual listener.

In short, there’s a lot going on under the surface of his music, and even on the surface there’s a lot that meets the ear. He could flow along nicely, if in different meters and tempi, and then suddenly bring you up abruptly with fast little sixteenth-note flurries that seem dislocated from the rest of the piece (listen, for instance, to the third Prélude, “Le jeu des contraires,” for a good example of what I mean) yet actually work as an impetus to move things along briskly as he develops his themes quickly and expediently.

By way of compensation, however, Dutilleux could surprise you with what sounds like a fairly simple tune, merely set to unorthodox chord changes, as in the first movement of Au fré des ondes (or On the Waves), titled Prélude et berceuse. This does indeed resemble something that Debussy might have written in his late years, albeit with harmony that moves “sideways” as the quirky but attractive melody line moves along and morphs, and in the second piece, Il Claquettes, his rhythm is quite regular, propelling the music with a jaunty French feeling.

Dutilleux, then, was a composer with more than one style and more than one “voice,” and this is exactly what I mean when I castigate many modern composers for getting hung up on just one specific style of writing music. It lacks not only imagination but also real musical knowledge; all they know is their “Johnny-one-note” styles and thus cannot express anything human, thereby cutting them off from real communication with their listeners. Dutilleux’s Mini-prélude en éventail, for instance, seems to occupy a midway point between his more diffuse and his more rhythmic styles, while Résonances is far more abstract than either. Here, the music emerges in short, sharp, stabbing figures of notes that sound disjointed before moving into a strict rhythm, thereby combining two of his styles in one piece.

In all of this music, Quarteraro plays with not only an outstanding technique but also with a full understanding of what this music is about. She understands Dutilleux’s many moods, imbuing the music with seriousness, lightness or even a bit of humor that each piece calls for. This is not easy to do, particularly in music that will quite probably be unfamiliar to even many Dutilleux admirers although none of these are first recordings. In short, she presents here a unified view of the music, which helps the listener absorb what is being heard in a way that makes musical sense even when the flow is disrupted or it sounds abstract. She is particularly good in the Piano Sonata, another work in which Dutilleux combined different musical approaches while still retaining a proper “classical” sonata form.

This is an outstanding album, one which I highly recommend.