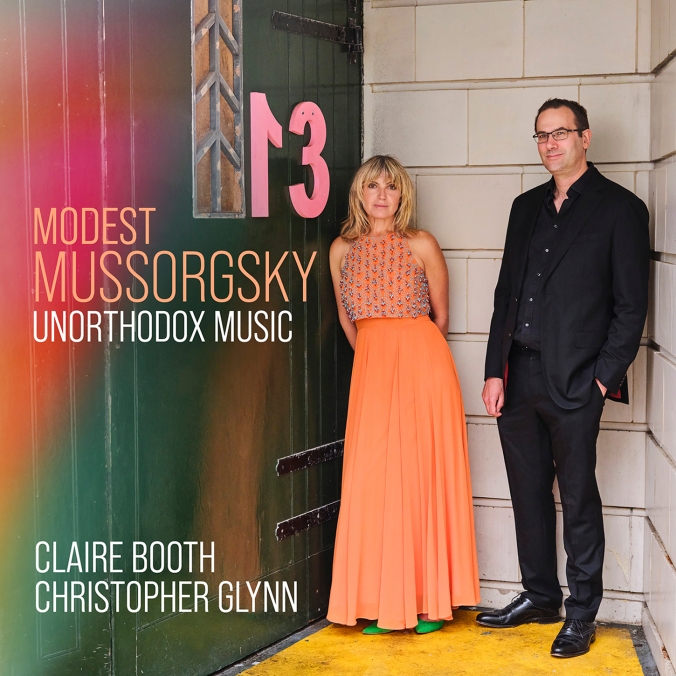 MUSSORGSKY: The Billy Goat – A Society Tale. Memories of Childhood: Nanny and I;* Nanny Locks Me in a Dark Cupboard.* The Nursery: With Nanny; In the Corner; With the Doll; Hobby Horse. Porte-ensigne Polka.* Desire. Impromptu-passioné.* Many Have Grown From My Tears. Sorochinsky Fair: Hopak of the Merry Young Ukrainians.* Night. Hopak. Oh, How Your Eyes Look at Me Sometimes. Oh, you drunken sot! Intermezzo in modo classico.* Songs & Dances of Death: Trepak. Album Leaf: Méditation.* The Leaves Rustled Softly. Pictures at an Exhibition: Cum mortuis in lingua mortua.* Sunless Cycle: Within Four Walls; On the River. Rêverie* / Claire Booth, sop; Christopher Glynn, pno (*solos) / Avie AV2457

If you’re going to do older music, this is the way to do it. British soprano Claire Booth, along with her accompanist Christopher Glynn, traverse the path of Mussorgsky’s life through his music, and in doing so include a great many unknown or lesser-known songs and pieces, beginning with one even I had never heard of, The Billy Goat – A Society Tale as a Prologue. Glynn writes of this in the booklet:

A young girl runs a mile when she encounters an old, hunched, bearded goat, scared witless by its ugliness. But a few years later, when she meets an old, hunched, bearded, goat-ugly man? Reader, she married him. And straightaway, we hear how Mussorgsky can sketch out a character in music: dirty, gnarly music for the goat (and bridegroom); wholesome, churchy chords (but perhaps also a hint of steely determination) for the girl intent on marriage. This little satire may have the cynicism of a comic strip, but these feel like real people, not caricatures.

The rest of the CD is organized as follows:

NURSERY: Four songs from the famous Nursery song cycle, but also a couple of strange piano pieces, including one called Nanny Locks Me in a Dark Cupboard (oh, that’s so Russian!).

YOUTHFUL YEARS: A polka and an impromptu played solo by Glynn plus a song called Many Have Grown From My Tears and an aria from his opera Sorochinsky Fair.

And here’s the best part – hang onto your hats, boys and girls, because you’re not going to believe this one! – soprano Claire Booth not only has a firm, beautiful voice but she sings with expression. And her diction is as clear as a bell. She has it all. So where has she been hiding? I have no idea. There’s not a word about her background or activities , and a Google search only turns up a journalist with her name, some poor woman who died at age 24 of cystic fibrosis, and of course, Claire Booth Luce. I first ran across some real information on her in an album she made some years ago with conductor Robert Craft, singing Anton Webern’s Cantata No. 1:

British soprano Claire Booth has become internationally renowned for her commitment to an astonishingly wide range of repertoire both on the operatic stage and concert platform. In the 2012-13 season she performed Kurtág’s Kafka Fragments in Netia Jones’s production at the Royal Opera House, Mozart concert arias with the Deutsches Symphonie-Orchester at the Berlin Philharmonie and Oliver Knussen’s Whitman Settings with the Boston Symphony Orchestra. Her many operatic rôles have included Rosina in The Barber of Seville and Dorinda in Handel’s Orlando (Scottish Opera), Lucia in Britten’s Rape of Lucretia, and the Narrator in George Benjamin’s Into the Little Hill (Aldeburgh Festival). http://www.claire-booth.com

And at her website I discovered that, in addition to singing a few “standard repertoire” roles like Rosina in Il Barbiere and Elcio in Mosé in Egitto and recording songs by Mendelssohn and Grieg, she has done a lot more modern music (add Janáček and Webern to the list above). So no wonder I hadn’t heard of her. You sing “outside” repertoire, you don’t get promoted. What a shame.

As for the music, the Porte-ensigne Polka is atypical of Mussorgsky in that it is a light, cheery piece, but also atypical in that it is repetitive and not very interesting. But all of the songs, and many of the piano pieces, are interesting, and Booth’s superb interpretive skills make them more interesting still. It’s a very light, bright voice with a quick vibrato, all of which reminded me very much of the late Lucia Popp. Would that she had Popp’s fame and publicity behind her; she clearly deserves it. Just listen to the way she tears into Oh, you drunken sot and you’ll quickly appreciate her abilities. This is a soprano who has it all. Would that she had been chosen to sing Marzelline in Marek Janowski’s Fidelio recording!

Clearly one of the outstanding vocal albums of the year. You simply won’t believe your ears.