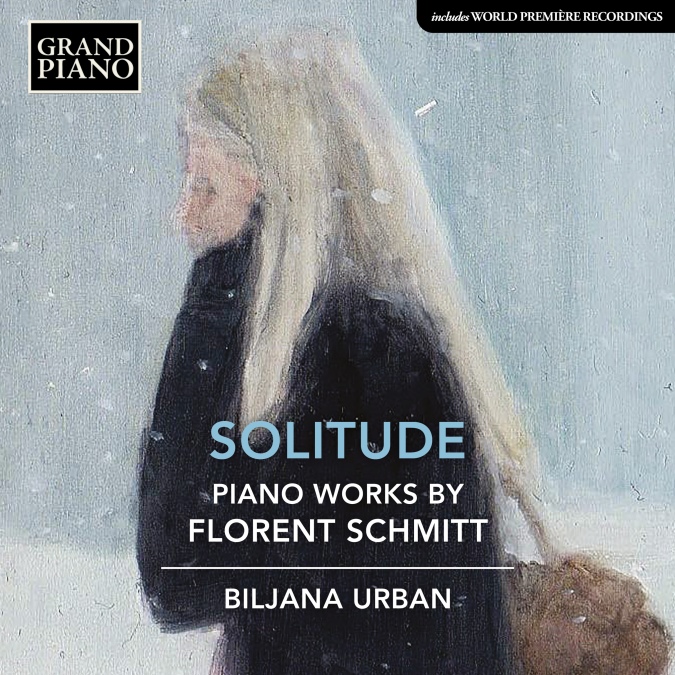 Sometimes the artistic quality of a composer’s or poet’s output does not jibe with the human quality of the person, and this was the case with Florent Schmitt. His music was utterly brilliant and original with a humanistic bent to it, but the man himself was a nasty little shit who was anti-Semitic and cheered the Nazis for suppressing the Jews. But then look at Ezra Pound, possibly America’s greatest poet of the early-to-mid-20th century, who went on the air extolling the virtues of the Italian Fascists.

In this recital, pianist Biljana Urban serves up some of Schmitt’s lesser-known works written for solo piano, starting with the Crépuscles or Twilights. These are mood pieces in the vein of Debussy or Ravel, except that Schmitt clearly had his own way of constructing them, with less of an emphasis on the opaque and a bit more on the side of concrete feelings. Although I admit to not having heard these works before, I sensed that there was something amiss in Biljana Urban’s performances, and that was an almost complete lack of legato phrasing. So I went online and looked for a comparative performance, and found one played by Laurent Wagschal on Timpani 1C1219m a disc released in January 2014. His performance of these pieces was clearly played with a good legato. Thus I am going to skip any further discussion of the pieces on this disc which are available elsewhere and just focus on those that were recorded here for the first time.

The eight pieces collected under the title Pupazzi or Puppets are entirely different from anything that Debussy or Ravel might have written; they are strongly rhythmic pieces, and these Urban plays very well. But the problem I have with much of this music is that it is light, airy and not very substantial; it just goes in one ear and out the other. In fact, most of it just sounds like a book of exercises, and piano exercises, no matter how cutely written, are just exercises.

The Op. 27 pieces are much more interesting music, laying somewhere between the French and German schools of impressionist music—but here, again, Urban’s clumsy legato phrasing gets in the way of one’s enjoyment. With all the hundreds of thousands of fine pianists out there today, I have no clue why Grand Piano signed her to record these works. They deserve better performances. Even so, she does a fine job on the faster, less flowing pieces such as No. 2, the Danse orientale.

Bottom line: the Crépuscles, 9 Pièces and the lively Ritournelle are pretty good music, but much of it is ineptly played.