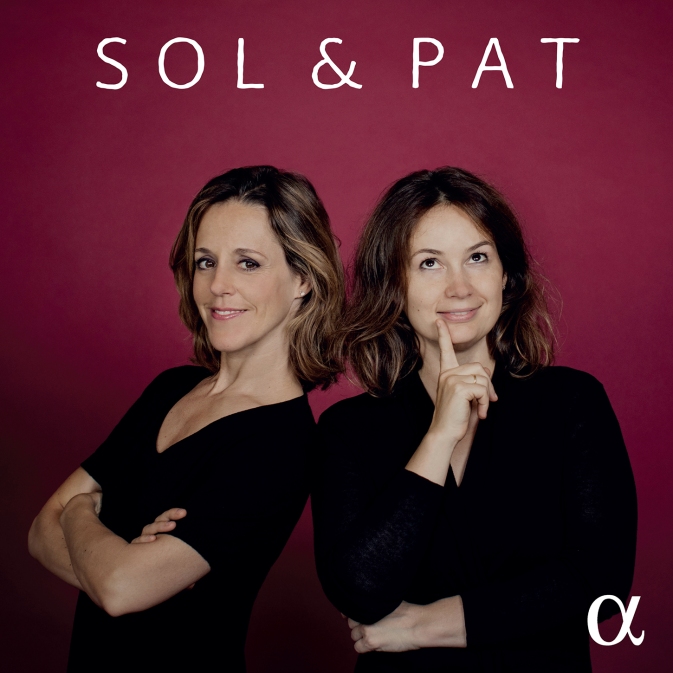 Although cellist Sol Gabetta and violinist Patricia Kopatchinskaja are close friends as well as frequent performance partners, this is their first duo album. The liner notes, which consist solely of a dialogue between them, suggests that they couldn’t wait to put this album out, yet for some reason they waited three years, since the last tracks for this disc were recorded in August 2018.

The liner notes consist of a conversation between them, and whether real or contrived it’s got a lot of warmth and humor in it. The point they make is that they often meet for “coffee” and spend hours going over scores together, old and new music, and for whatever reason the Tambourin in C by the obscure Baroque composer Jean-Marie Leclair is one piece that grabbed them. But so did works by such modernist as Jörg Widmann, Francisco Coll (one of Kopatchinskaja’s friends), Marcin Markowicz, Julien-François Zbinden, Iannis Xenakis and György Libeti, three of whom (Widmann, Markowicz and Zbinden) I’ve never heard of before.

Well, I can see why the Leclair piece grabbed them…it gives Pat a chance to whack the ol’ tambourine for all it’s worth, and the two of them a chance to tear through the piece with double gusto. I just wish they had used a little light vibrato for sustained notes, which is true historically-informed performance practice. Interestingly, Widmann’s Duos for Violin & Cello have the same sort of wild sound at the outset as the Leclair piece, just set to bitonal harmonies. And there is clearly a simpatico between these two musicians; they sound as if they’re having so much fun playing together than the audience is merely an afterthought. Would that all classical musicians had this kind of energy when they performed; it might actually popularize the music instead of confining it to stuffy old concert halls.

I couldn’t figure out how two string instruments would play a piano piece like the “Presto” from C.P.E. Bach’s Keyboard Sonata in E minor. The answer is: pizzicato. By contrast, Coll’s Rizoma is all legato, built around sustained tones, some of which bend the notes out of their tonal center, at least until the 4:53 mark when the tempo increases and the music virtually explodes.

For those familiar with older recordings of the Ravel Sonata for Violin & Cello, such as the one by Arthur Grumiaux and Hermann von Beckerath, this performance will galvanize you. It’s light, bright and fleet, yet still has emotional depth to it. It just sounds a bit odd because 1) they’re using straight tone (not altogether historically correct although a few French violinists, like Henry Merckel, did play with next to no vibrato) and 2) they emphasize the rhythmic aspects of the work over the melodic, even in medium or slow passages. Indeed, the fast second movement almost sounds like the latter half of the Coll piece. The music practically bounces off their strings, particularly in the fast final movement. This may seem off-topic, but I’m wondering: since Kopatchinskaja’s father was a cimbalom player—and an excellent one at that—does she sometimes think of her violin as a percussion instrument? I would consider it a possibility.

Marcowicz’ Interlude is a quiet but exceedingly strange piece, with the violin playing fast, strange atonal figures with the edge of her bow while the cello plays a sort of atonal fast continuo underneath. It almost sounds as if the pair were tuning up to some bizarre rapid étude. Interestingly, Gabetta points out in the conversational liner notes that they made four mistakes when recording it, and points them all out bar by bar and note by note…but then admits, “Despite that, I think it sounds quite nice the way we played it!”

In Zbinden’s La Fête au village, the duo simulates the sound of a harmonium (or perhaps even a hurdy-gurdy, the harmonium’s sidewalk cousin). The first movement begins slowly and mysteriously, but also explodes in the middle, while the second is a sort of clumsy peasant dance led by the cello galumphing in the foreground, followed by a very drunken-sounding violin solo. Apparently this village festival had a little too much wine flowing. Incidentally, the composer was still alive when this duo recorded the piece, so they sent the sound file to him. He emailed them back—at the age of 101!—to tell them they were right in considering it an “affectionate caricature.”

I’m not normally a fan of Xenakis’ music, but his Dhipli Zyla is a lively piece set bitonally with some nice fugal interplay between the two instruments. I was startled to read that Kopatchinskaja believes that Ligeti’s Hommage à Hilding Rosenberg could “come from any era”; its harmonic structure, which constantly leans in and out of the tonal center, clearly mark it as a 20th-century composition. Indeed, their less legato and more edgy approach to the Kodály Duo make it sound almost like a late-20th century piece simply due to their razor-edge playing and rhythmic accents. Kopatchinskaja’s high, screaming notes at the 3:35 mark in the second movement almost sound like cries of pain. The recital ends with their transcription of yet another piano piece, this one charming and lyrical rather than fast or edgy.

This recording is much more than just a great duo-recital. It is a true fusion of minds, one brain with four hands playing two different instruments, a sort of psychic performance in which everything falls into place as if by magic. By all means, get this one. You won’t believe your ears.