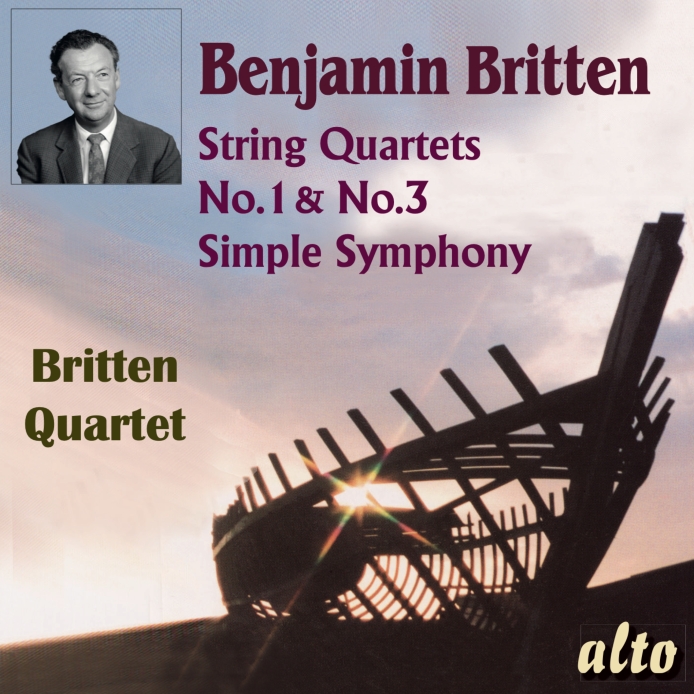 The music contained on this CD, a reissue of performances recorded in 1990-91, has a sort of criss-crossing history. In 1931, while still a student, Britten wrote his first string quartet, but although one of his composition teachers, John Ireland, loved it, the other, Frank Bridge, thought it needed more work, and since Britten trusted Bridge more than Ireland he put it aside. Three years later, he wrote his now-famous Simple Symphony for string orchestra; then in 1941, while in America, he wrote his official String Quartet No. 1 which opens this CD. Thirty-three years later, while recovering from his open-heart surgery (a botch job which weakened him to the point of being an invalid and led to his death…never trust doctors!), he revisited that early quartet and turned it into his String Quartet No. 3.

All of which makes perfect sense except, why on earth is the Simple Symphony being performed here as a string quartet? The answer, in the booklet, is that “by following the instructions that Britten added to the score in two or three places, it can be played just as effectively by a string quartet.” Well, we’ll see.

The Britten Quartet—the group, not the piece—is an exceptionally skilled group of musicians who have all had experience holding important posts with British orchestras. I immediately wondered about Andrew Shulman…was he in any way related to the fine American cellist-composer Alan Shulman? It turns out he was not. He’s British through and through, and although both of his parents were professional musicians, his father played the bass, not the cello (and his mother was an opera singer).

As for the music itself, it is strange and typical of Britten’s style from the early 1940s onward. The first movement opens with high, eerie, almost modal string chords before moving into more rhythmic territory, and it returns to the high, strange music just before the end of the movement. By this point, Britten was already working more in a pattern of mood-setting than of strictly adhering to established form, thus in a sense he was a radical composer at a time when most other British composers were all about form. Eventually he was to take this modus operandi to extremes, with some of the pieces he wrote not really working (Gloriana, the Nocturne and Owen Wingrave are examples) and some working very well indeed (Curlew River, the Canticles, A Midsummer Night’s Dream and Death in Venice), with the watershed work being Peter Grimes. The second-movement “Allegretto con slancio” is a more conventional piece with a lively rhythmic base, while the third-movement “Andante calmo” is entirely amorphic. Yet the “Molto vivace” finale, with its open harmonies and lively but irregular rhythms, is a breakthrough of another sort, particularly in his use of a slower, out-of-tempo “trio” theme that bears only a slight resemblance to the music that precedes and follows it.

Not surprisingly, the early/late String Quartet No. 3 is more conventional in form thought it uses the kind of harmonies that Bridge himself used, and were considered quite advanced in 1931, yet Britten still worked some mood passages into its structure that mark it as a late work and not altogether an early one. An aggressive sort of rocking or syncopated rhythm crops up in the first movement and arrests our attention for a while until it moves on to more amorphic and dissonant terrain. Of course I’m only guessing as to how much of this was carried over from 1931, but I’d say probably about half of it. This movement ends in the middle of nowhere before continuing with the slow movement, marked “Solo” because it focuses on the first violin, though at the four-minute mark it suddenly erupts like a bird being chased by a large, slithery reptile (the viola, playing glissando figures up and down behind it). I would guess, but am not positive, that the brief, fast and dissonant fourth-movement “Burlesque” is also a holdover from 1931, but I really don’t know about the long, concluding Passacaglia. One thing I found a bit odd about the performance style of both quartets is that the strings used exceptionally light vibrato, which gave the music a strange sort of retro-“HIP” feeling, yet the Britten Quartet maintains a steady pulse and plays with considerable intensity.

They also bring a tremendous amount of “bite” to their reduction of the Simple Symphony, although I have heard one or two recordings played by a full string section that sound quite similar in approach. The music isn’t great but it is good, and more in the composer’s earlier style based in part on Bridge and in part on Henry Purcell.

All in all, then, an excellent recording of Britten’s too-seldom-heard string quartets. Highly recommended.