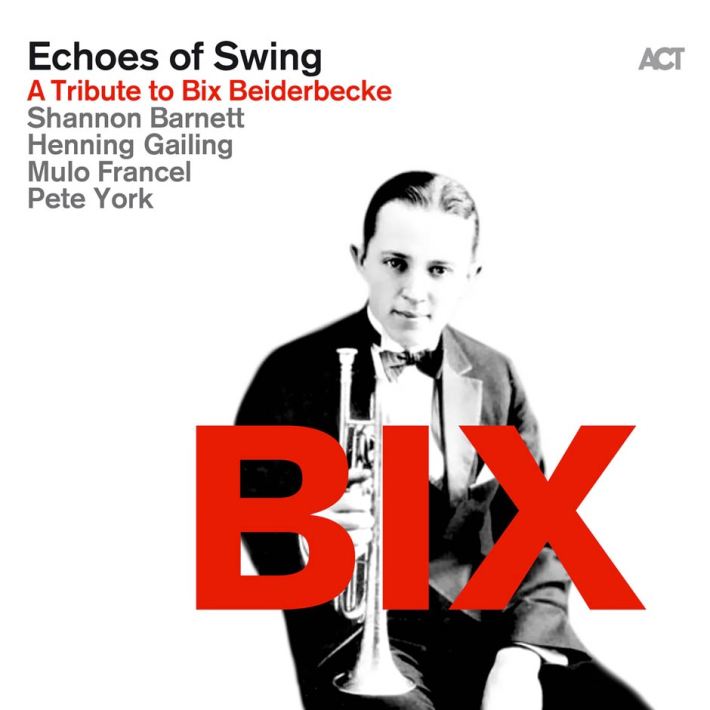 This recording, evidently the brainchild of the jazz quartet known collectively as Echoes of Swing—British trumpeter/cornetist Colin T. Dawson, American alto saxist Chris Hopkins, German pianist Bernd Lhotzky and drummer Oliver Mewes—brings the musical concepts of Bix Beiderbecke out of the 1920s and into the 21st century. As noted in The Guardian, “This extraordinary band take earlier forms of jazz and do radical things to them. It’s not done to mock or parody them in any way, but to coax out hidden delights and add a few of their own.” But I’ve listened to other Echoes of Swing recordings and live performances on YouTube, and as good as they are, they pale by comparison with this complex and interesting set.

The late Ralph Berton used to say, often, that if you could lift Beiderbecke’s solos off the old records and put them into the context of a 1950s cool jazz group, they’d fit like fingers in a glove. On this album, Echoes of Swing and four accomplices, Australian trombonist-singer Shannon Barnett, German C-melody saxist Mulo Francel, Danish bassist Henning Galling and British drummer-vocalist Peter York, lift the musical concepts of Bix into this new world but except for two selections do not quote him.

The results are really quite extraordinary. Although the arrangements and original compositions were written by five different musicians, Lhotzky, Francel, Hopkins, Barnett and Dawson, their collective impact is the equivalent of Bix Beiderbecke Meets Gil Evans, with Special Guest Star Stan Getz, because alto saxist Hopkins is clearly channeling tenor saxist Getz more than any alto saxist I can think of.

But annotator Lhotzky is incorrect in stating that it was C-melody saxist Frank Trumbauer who “awakened a desire in Bix to become familiar with the music of Debussy, Ravel and Stravinsky,” even though Trumbauer also liked those composers. It was the Berton brothers, Ralph and Eugene, the latter of whom studied with Nadia Boulanger and was the favorite singer of the French group of composers known as Les Six.

I wrote an article on this blog titled Chasing Bix, the Introverted Enigma in which I tried to distill what he himself created away from the musicians who surrounded him, a few of whom understood what he was doing but most of which really had no clue. I even uploaded a fairly large number of solos and chase choruses on the Internet Archive, with links in my article, for readers to listen to. Echoes of Swing apparently had the same idea, except that their highly skilled group of arrangers and composers went several steps further. Barnett’s original composition Nix Like Bix, for instance, is based on a tune that Beiderbecke recorded with the Goldkette band, Blue River, but only the most sophisticated ear could find Blue River in this piece without being told this.

At the Jazz Band Ball, in this arrangement by Lhotzky, is probably the closest thing to a ‘50s cool jazz setting. Ralph Berton would have loved it; Bix might have been lost, however. He was generally the last person on earth to appreciate his own talents. And what’s really interesting about these arrangements and performances are that it’s largely the scores themselves, with their extraordinary voicings, intros, outros and interlocking segments, that are the stars of the show here. Colin T. Dawson is a technically adroit cornetist, and he does play some good solos, but none are on Bix’s level—yet they don’t have to be. They pay tribute to Bix without copying his exact sound, and three of the improvisers here, Barnett, Hopkins and Francel, are really the finest of the lot. Every time they start playing, your ears pick up and pay attention, as well they should. Their contributions are the most extraordinary. On Everything That Was, Hopkins even manages to channel Johnny Hodges.

(Tango) In the Dark is a rewrite of one of Bix’s four original piano pieces, given a slow Latin beat and primarily featuring Hopkins throughout as soloist, but there’s also a very nice piano-bowed bass duet in it. At Children’s Corner opens with a quote from Debussy’s Golliwog’s Cakewalk, and here both Dawson and the rhythm of the piece come closer to ‘20s jazz. Happy Feet wasn’t a song in Bix’s repertoire, even though it made its debut in 1930, by which time he had left the Whiteman band for the second (and last) time. (Andy Secrest played the cornet solo on Whiteman’s recording of it.) The band gives it a sort of Dirty Dozen Brass Band treatment and has fun with it. I’ll Be a Friend (With Pleasure), one of Bix’s last recordings, is given a Jobim sort of bossa nova beat. The band noted that, ironically, Beiderbecke’s style fit in well with Latin rhythms. In Hopkins’ skilled hands, The Boy From Davenport morphs into The Girl from Ipanema without batting an eyelash—or changing the ‘20s jazz beat they play it to.

In Singin’ the Blues and Jazz Me Blues we get the only Beiderbecke quotes, his solos orchestrated. The latter also features a wonderfully modern solo by Emile Parisien on soprano sax. We wrap things up with one of the most complex charts on the album, Ol’ Man River.

The really sad thing about this recording is that Bix would probably never have been able to grasp the fact that what he did on the cornet influenced all of this. But those who appreciated his talent can make the connections, and most of it is wonderful to listen to.

2 thoughts on “A Strange But Interesting Tribute to Bix”