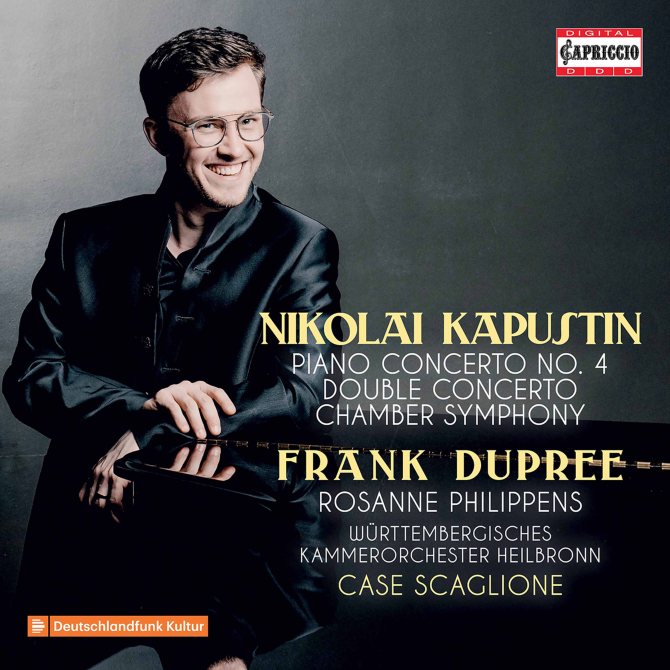 Pianist Frank Dupree, whose name looks American, is actually a German pianist who was initially trained as a jazz percussionist. That is more important than you might realize because this CD features the music of Nikolai Kapustin, the late Russian composer whose compositions are fully saturated with jazz feeling and swing. Interestingly, Dupree has also made a recording of music by avant-garde composer Peter Eötvös for the Genuin label, so his interest in modern classical music seems to be fairly wide.

The Fourth Concerto, as it turns out, is the only one by Kapustin I didn’t have in my collection, so I was very interested to hear it. I was a little shocked to hear a sort of fusion beat in the first movement; I didn’t know that Kapustin had written anything leaning towards fusion; but there is good fusion (Don Ellis Orchestra, Blood Sweat & Tears) and bad fusion (Miles Davis and everything influenced by that style), and this isn’t nearly as bad. After the explosive opening, however, the music relaxes into a sort of relaxed-funky groove until the 2:42 mark, when it suddenly ramps up again. Dupree has a phenomenal technique, to be sure, but I would caution him against over-flash. A little more clean articulation of the notes would have been welcome, though I admit that the man can certain swing.

Although this concerto is a one-movement work, it shifts into the slow section at about 4:45, and this Dupree played very well, which was important because much of the first section is piano alone, the strings not coming in until almost a minute later. A bit further on, there’s a nice passage in which the piano swings against the flutes and later the cellos and basses. Around 9:25 we swing into the third movement, a fast 4 played against a medium 4 for the orchestra. Then, at around 13:25, we shift into overdrive, the rock-jazz beat returning to drive the music forward. After a brief but pregnant pause around 14:20, the piano plays what amounts to a solo cadenza in a slower tempo to start with, becoming very fast in the middle section (and again, Dupree tends to lack a bit of clear articulation here) before moving into the equally fast last section. At least the way it’s played here by the Württemberg Chamber Orchestra, a little stiff rhythmically but with great virtuosity, it’s a breathless piece.

The concerto for violin and piano is a slightly different animal. Kapustin wrote so little for any other instrument than the piano that I was very curious to hear how he treated the violin. I’d say that he was probably a fan of either Stéphane Grappelli or Svend Asmussen, because the violin part swings, too, as does the orchestra; and here, at a slightly more relaxed pace than in the piano concerto, the Württemberg string section swings surprisingly well. And so does violinist Roseanne Philippens! Give this lady a pat on the back for rising to the occasion and doing an excellent job in music that is far removed from the Vivaldi and Mozart she normally plays. Listening to her interaction with Dupree, I was somewhat reminded of the “hot sonatas” recorded in the mid-1970s by Joe Venuti and Earl Hines except, of course, Kapustin has written everything out ahead of time. What sounds like improvisation in his music really isn’t, and this is what separates him from Friedrich Gulda and Daniel Schnyder, who allow some freedom in their compositions. I particularly liked the second movement despite the almost-pop-music-like intro by the string section; here, I would say, it is the violin even more so than the piano that stars, with the keyboard playing accompaniment to her solo excursions. Dupree is excellent in this piece, pacing his piano playing perfectly without rushing things and really swinging. the whole movement has that lazy-summer-afternoon-jazz-concert kind of feel about it.

The third movement has a driving rhythm that, though allowing some room to swing, is actually closer to a classical ostinato beat, but Dupree and especially Philippens do a splendid job, particularly in the section where they are accompanied by a solo bassist and occasional violin interjections. There’s also a solo passage for the pianist to play in a fast sort of stride piano style, to which the violin adds its own commentary. Really fun music!

Yet it’s the Chamber Symphony that is really unusual because, although there is a prominent part for percussion, it’s not a concerto at all and features no piano. Here Kapustin relied a little more on his classical models, albeit with just enough of a jazz beat to remind you who the composer is. there’s also a lot of interesting changes of meter and rhythmic interaction between the low instruments and the high ones, playing these against one another the way he might have done between the bass and treble ends of a piano.

To a certain extent, however, I found this work somewhat more episodic than normal for Kapustin and therefore a little less effective than the preceding pieces. I think he was just a little too clever for his own good here; by continually fiddling around with tempo and meter, he wrote a piece in which the different sections sound juxtaposed and not continuous or logical. But sometimes even a partial failure by a good composer is more worthy of hearing than a good work by a generally bad composer. Happily, the second movement is less jumbled in style and works very well.

Despite my reservations about the Chamber Symphony, this is surely a valuable and interesting recording of under-recorded works by one of the finest composers of the past half-century.