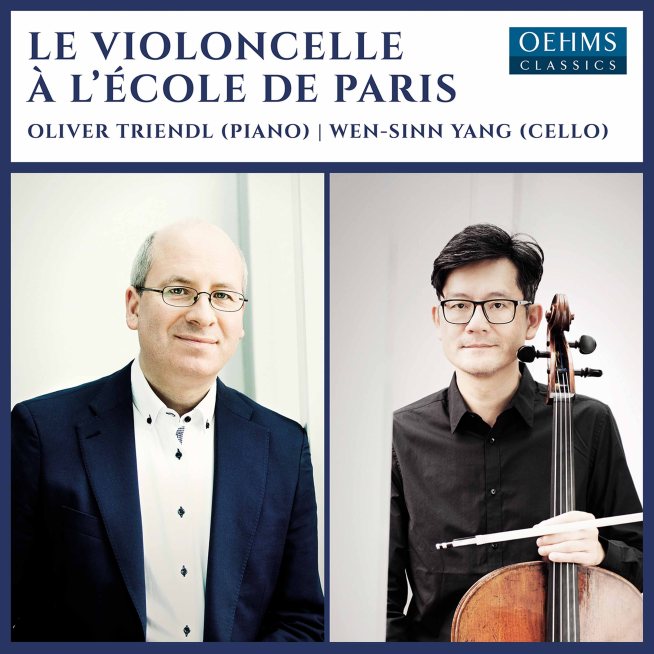 Here we have a Chinese cellist who lives and teaches in Germany playing music of the 1920s “French school” by composers who were not French. You can’t get more polyglot than that!

Indeed, as I looked over the list of composers I thought of my online friend, Czech pianist Giorgio Koukl, who specializes in just such a repertoire and just such composers. But since these are works that include the cello, the perspective is a bit different. The two works presented here by Hungarian composer Tibor Harsányi are first-ever recordings.

This was probably the richest and most interesting period for French music; in addition to the five names presented here, Stravinsky, Prokofiev and Anthiel were also living and working in France alongside such forward-looking native composers as Milhaud and Honegger. Paris in particular was the hotbed for modern music, but for the most part all of these composers worked within a primarily tonal framework with unusual chord positions, which leaned towards bitonality, underpinning their music. Harsányi is perhaps one of the most interesting, in part because, as Koukl pointed out to me, almost nothing is known of him personally. He may not have been an ingratiating personality, but in any case he was, for many years, the least remembered of them all.

Yet Harsányi definitely had his appeal, skillfully blending tunefulness with modernity in a way that can still captivate the listener. And Yang is a cellist whose lean, clear tone sounds absolutely perfect for this repertoire. He plays with both a fine line and rhythmic acuity; one would be hard-pressed to think of another modern cellist more perfectly suited to this “French school” music.

Yang is able assisted in this project by German pianist Oliver Triendl who, like Koukl, specializes in neglected and little-known music of this period. What a breath of fresh air this CD is from the normal run of “reimagining” Mozart, Beethoven, Liszt, Chopin, blah blah blah. Not a note or phrase of any of these pieces goes by the ear unnoticed, so emotional and intense is the playing of this talented duo. They are clearly on a mission, and you are among those they wish to convert to this repertoire. Just listen to the way they romp through the second of Alexander Tansman’s Deux pieces and you’ll know what I mean.

The opening of Martinů’s Variations on a Slovakian Theme put me in mind of Enescu, but I don’t think Martinů would have complained too much about that. Later on in the piece, however, one hears the kind of unusual chromatic movement that was a hallmark of Martinů but not of Enescu, and the piece is a fascinating blend of Czech and modern (of the time) classical music.

The Cello Sonata shows Harsányi’s more sober and serious side, delving into interesting harmonic changes n the accompaniment as the rather anguished and busy cello line moves along. The second movement is more lyrical but no less interesting harmonically as the chords continually shift up and down, sometimes chromatically, sometimes stepwise, but always returning (however briefly) to the home tonality. In the last movement, the music is fractured in a quirky, unpredictable manner, yet somehow put together in a way that makes sense.

Russian-born Alexander Tcherepnin’s Songs and Dances are lighter fare, clearly designed to please audiences despite the occasional unusual key change, but well written for all that. The last of them, “Kazakh Dance,” is the most interesting harmonically and rhythmically.

Marcel Mihailovici is described by Wikipedia as “a French composer born in Romania. He was discovered by George Enescu in Bucharest. He moved to Paris in 1919 to study with Vincent d’Indy.” His Sonata in the character of a lyrical scene is less lyrical than very spiky harmonically, in fact with the atonal chords often jumping up or down to suit the whim of the moment. It is so modern, in fact, that it almost has nothing either French nor Romanian about it, and is so meatily written that one must pay constant attention to it so as not to miss anything. (Really, it’s the kind of piece that begs multiple listening before you really hear everything in it.) Eventually he throws in some sliding chromatics and a low crushed piano chord for punctuation, but the music keeps on changing and developing. A marvelous piece!

This is a fabulous CD, clearly one of the best of the year. You really should get this one.