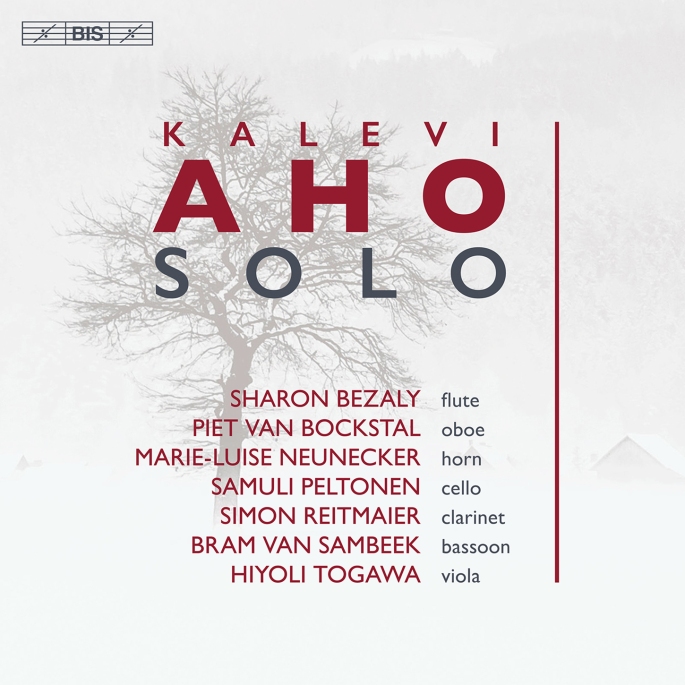 On this odd but wonderful SACD, composer Kalevi Aho, known primary for his fascinating orchestral works, presents seven pieces for individual soloists written between 1990 (Solo III) and 2019 (Solo XIV). I think what surprised me most of all was how lyrical most of these pieces are. No matter that, when writing for them in an orchestral setting, Aho really puts them through their paces in terms of range and rhythmic difficulty; here he seems to be focusing on the ability of most of these instruments to “sing” a lyric line, and although the music certainly shifts tonality here and there, he does not push them off the tonal cliff. This despite the fact that, for instance, there are some tricky slap-bass and high “whistle” effects in the cello solo and equally high whistling effects at the beginning of the viola solo…which, interestingly, is programmed immediately after the one for cello.

This piece for the viola, written 19 years after the one for cello, is indeed much more advanced in both harmony and structure than the cello piece, and becomes quite virtuosic in places, yet it still falls back several times into melodic patterns.

This spell is broken in the oboe solo, which opens with a string of upward glissandi that conclude on buzzed tones. This is more like the edgier Aho of his orchestral works. The buzzes become more frequent before Aho moves the oboist into a series of somewhat circular eighth-note phrases. But then, as in the pieces for strings, Aho moves the soloist into more lyrical territory…but he still obviously gets a kick out of making him buzz in the upper range.

The solo clarinet piece opens with glissandi and microtonal passages, then moves into some long-held notes before breaking out in little serrated atonal flurries. Although relatively quiet, this one is a real tour-de-force for the soloist, and Simon Reitmaier plays it brilliantly. At one point, the clarinetist plays “chords” consisting of hummed and blown notes, a very tricky effect for an instrument that can usually only play one note at a time.

Next up is the bassoon, and here again Aho pushes the envelope in terms of technique, starting in the instrument’s lowest register before moving up to odd little figures that sound somewhat disconnected at first. Later on, the performer plays blats on his instrument with little downward grace notes on them, along with more strange figures with very fluid harmony. It gets even harder later on with gritty overblown chords. This one is no walk in the park!

For the horn solo, we get the great German hornist Marie-Luise Neunecker with her wonderfully open, golden tone. This one lies halfway between lyrical and edgy, calling on the soloist to play wide intervallic leaps—always difficult to control on a horn—as well as fast, lipped staccato notes in rapid succession.

We end with the two-part flute solo piece, again played by a name I recognize, the great Sharon Bezaly. This one is microtonal in the extreme since the instrument lends itself to such music, yet still retains a certain amount of lyricism. Again, however, Aho exploits the full gamut of what the instrument can do, pushing boundaries which Bezaly, happily, is able to overcome. Around the 6:39 mark, and afterwards, Aho pushes her instrument into the high piccolo range, which she also handles brilliantly. In the second half of this piece, the only one to be divided into two different halves, Bezaly handles the rapid, breathy figures amazingly well.

This is yet another feather in the cap of Kalevi Aho as a composer as well as Bis Records for recording and promoting his music. He is surely the best modern Scandinavian composer since Leif Segerstam, and they are lucky to have him on their label.