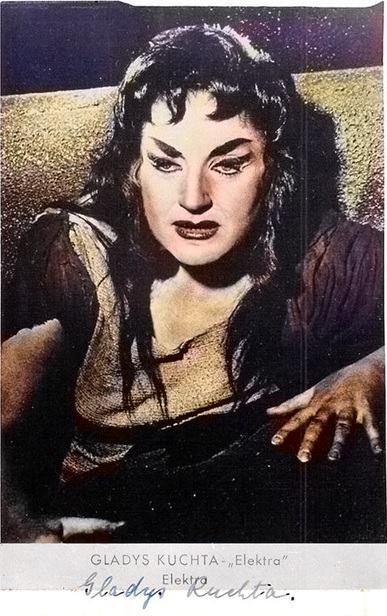 One thing you learn as you grow older and, ironically enough, discover great singers who were around when you were young that you never knew existed, is that not all outstanding opera artists were treated fairly, and in the case of three American sopranos this is certainly the case.

The first of these is Gertrude Ribla (1914-1980), a Brooklyn-born soprano who left us exactly two recordings, Act III of Verdi’s Rigoletto conducted by Arturo Toscanini and a complete performance of some miserable specimen of an opera called Lord Byron’s Love Letters by Raffaello de Banfield. It is the former that captures one’s attention because it was the first of Toscanini’s two performances of this act in which he chose to use a meatier-sounding lyric soprano rather than the usual light, high soubrette-coloratura. His second performance from 1944 is the one everyone knows because it uses two big-name singers, soprano Zinka Milanov and baritone Leonard Warren, but although Warren was indeed an improvement on Frank Valentino the year before, it is Ribla who presents the more believable, vulnerable Gilda, and whose voice sounds younger and more pliable. It is a first-class performance.

The second of these was Lucille Udovich (1930-1999), of whom I wrote an appreciation way back in May 2016. Fortunately, she left us a fairly good-sized legacy of live performances and recordings, so I was able to do her more justice.

And now there is Gladys Kuchta (1923-2011), who had an even bigger and more impressive American career, mostly at the Metropolitan Opera, yet who is barely remembered today. I ran across Kuchta the same way I ran across Udovich, checking out recordings on the Naxos B2B website. I was investigating recordings by Jon Vickers and came across his December 1961 Met broadcast of Die Walküre on which Kuchta, who I’d never heard of before, was the Sieglinde, and was absolutely blown away. Here was a singer with the requisite power for Wagner, yet also with a surprisingly fresh, youthful-sounding voice as well as great interpretive qualities. Who was she?

As it turned out, she was an American who established herself in Germany and Austria after World War II. She sang at the Vienna State Opera, Deutsches Oper (for 17 years!), Royal Opera House Covent Garden, the Bayreuth Festival, Teatro Colón and San Francisco Opera in addition to the Met. Her parents were of Polish origin though she was born in Chicopee, Massachusetts. Her obituary in The Independent tells us that she studied at Juilliard as well as with coloratura soprano Sinalda Lissitschkina. In 1951 she received a scholarship to study in Italy, and it was in that country that she made her debut as Donna Elvira in Don Giovanni.

After engagements in Flensburg and Kassel, she joined the Stadtische Oper (West Berlin) in 1958 which changed its name to the Deutsche Oper in 1961, where she stayed until her retirement from opera in 1975. Among other roles, she sang in Hindemith’s Mathis der Maler, Amelia in both Un Ballo in Maschera and Simon Boccanegra, Leonore in Fidelio, the title role in Ariadne auf Naxos, Isolde, the Marschallin in Der Rosenkavalier and Chrysothemis in Elektra. In later years, she switched to the title role in Elektra which became one of her most celebrated characterizations. At San Francisco in 1964 she sang Abigaille in Nabucco and the Dyer’s Wife in Die Frau ohne Schatten.

Elizabeth Forbes, who wrote her obituary in the Independent, made the following observations:

It was in Götterdämmerung that she excelled: her stamina was legendary, and she never appeared to tire. As Isolde she also seemed to have inexhaustible breath, and energy to spare. I heard her give a performance at Munich in 1968, and her rage against Tristan in the first act was white-hot in its passionate emotion. That same year she sang a concert performance of Fidelio at the Royal Festival Hall, but Kuchta needed the stage to generate the dramatic intensity she usually displayed.

Kuchta also made a good impact at the Met, where she was a valuable member from March 1961 through March 1968. At the New York House she sang, in addition to Sieglinde, both Chrysothemis and Elektra in Strauss’ opera, Elsa in Lohenrgin, both Gutrune and Brünnhilde in Götterdämmerung, Leonore in Fidelio (with Vickers), Amelia in Verdi’s Ballo (opposite Richard Tucker), Senta in Der Fliegende Holländer (with Karl Böhm, George London and Giorgio Tozzi), the title role in Turandot (her Calaf was the vastly underrated Flaviano Labó and the Liù was Licia Albanese), Donna Anna in Don Giovanni and the title role in Aida. Yet although she received consistently good reviews from the often-picky New York critics, she made only two commercial recordings, the 1958 Fidelio with Julius Patzak (issued in the U.S. on Nonesuch) and a 1962 German-language Contes d’Hoffmann in which she sang Giulietta.

One wonders why, until one remembers that her era was also the era of much more famous European competitors: Gré Brouwenstijn (particularly for Sieglinde), Leonie Rysanek (Sieglinde, Leonore and Senta), and especially Birgit Nilsson (Brünnhilde, Isolde, Donna Anna, Elektra and Turandot). But surely a record label that did not have Brouwenstijn, Rysanek or Nilsson on their roster could have taken a chance on her…except that they didn’t, so all we have of her are live performances, particularly since she was married to her agent, Friedrich Paasch.

Here are some impressive examples of her artistry:

I hope you feel about her the same way I do. She was really an impressive artist.

One thought on “The Great Gladys Kuchta”