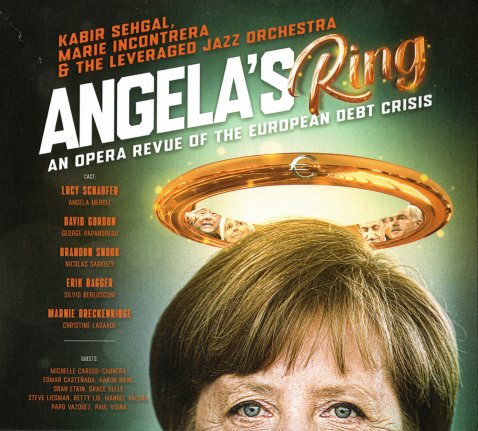 And now, as John Cleese used to say, for something completely different.

Here is a jazz opera about the European debt crisis.

But before you start yawning and stop reading this review, a word of warning: the music is REALLY interesting, and the story is full of dark humor.

For those of you who may have forgotten or, like me, never paid much attention because you didn’t care, it was apparently Germany’s Angela Merkel who was given the thankless task of wooing other countries, some of whom had been at war with Germany in the past and some, like Greece, who were liabilities to start with, to join the European Union, give up their local currency, and switch over to a new multi-country form of currency called the Euro. We all know what happened with Great Britain: they got the hell out after years of being shafted by the central EU government in Antwerp, told what to do and how to do it, and getting very little in return.

Interestingly, England’s very dramatic story is not part of this one. This tale initially concerns Greece, the Freddie Freeloader of the EU, who had debt problems before joining and just racked up more debt afterwards. Twice. Because Greece has a retirement age of 50, so all most Greeks do is sit around getting drunk on ouzo and pissing money away. So how was it a surprise that they had to have not one but two multi-billion Euro bailouts.

So how did this story get turned into a jazz opera? Well, because jazz bassist Kabir Sehgal (I’ve never heard of him before) was working in New York in 2011 as an investment banker (that’s his problem), and he thought it would be a nifty idea to write a libretto and convince composer Marie Incontrera (never heard of her either) to write a jazz opera on the topic.

It starts with a news bulletin announcing the beginning of the European Union before going into a sort of jazz version of Beethoven’s “Ode to Joy” (the official anthem of the EU) with new lyrics. In the second verse, both the rhythm and harmony are altered; our intrepid soprano (I don’t know who specifically) has a nice voice but her diction is only clear at times. It’s kind of funny to hear the “Ode” in this sort of an arrangement. A bit later on, Angela (Merkel, of course) sings, “All I ask is that you lie with me,” after which the whole “chorus” joins in. The background beat suddenly assumes a Middle Eastern groove. “Trust Germany to be your guide,” Merkel says. “I love the lying,” says one guy. “It’s so…convincing…to lie side by side.” Later on, after popping the cork on a bottle of champagne, a tenor sings, “We will borrow…and spend…borrow…and spend.” Well, duh, no wonder there was a debt crisis. I’d be in hock up to my ears if I did that, and so would you.

The biggest issue I have with Angela’s Ring is that it is too fragmented musically. There are some novel ideas here, but they juxtapose too much and synchro-mesh too little. It’s clever music but, in an effort to be entertaining, it tends to be somewhat kitschy. Of course, you may enjoy the kitsch more than I did; the text that is spoken and sung is undoubtedly clever and often funny, so it has that in its favor.

Mind you, I’m not saying that the music is bad. Sehgal quite obviously knows how to compose, but I think that by striving a bit too much to make it entertaining, he succeeded in making it a bit too much like pop music with some complex background passages here and there. The concept was a good one, but the execution leaves much to be desired.

But I don’t completely blame him; jazz operas normally fail one way or another because opera depends on a continuously developing musical scheme while jazz operates in the framework of a single piece, however long, even if it’s the movement of a concerto or a symphony. Even the late, highly talented Alonzo Levister had trouble writing a viable jazz opera, and his music was much more rooted in the blues. Nonetheless, if Friedrich Gulda were still alive I think he’d have done a better job, at least if one considers his excellent (recently found) jazz symphony.

Also, as the opera went on, I couldn’t figure out some of what was happening or what the joke was because 1) I don’t know all the players in the EU and their debt crisis, and 2) I don’t much care. It’s their mess, they made it, and they’re responsible for cleaning it up. My only personal comment to this whole thing is to advise you not to invest a single penny in bitcoin. If you thought the EU debt crisis was/is bad, you won’t know what hit you when bitcoin takes a swan dive into oblivion.

With all that being said, I do think that Europeans who understand English will enjoy Angela’s Ring a lot more than Americans. The topic hits closer to home for them, and if they haven’t committed suicide from losing their shirts in this gigantic Ponzi scheme, they’ll get a laugh out of it. I did get a laugh out of the line, “The Americans are guilty…they hid our money. Don’t blame Greece…we only want peace!” Yeah, I’m sure we did. But it’s just because we wanted you to have a nice, fun Easter egg hunt. As usual, I could have lived without the flabby, whiny electric guitar solo, but thankfully it only lasted a minute or two. The libretto by Marie Incontrera is really quite witty, almost assuming the proportions of a gigantic comic farce, and I did get a kick out of the classical music quotes (particularly that of “Nessun dorma” when the Greeks collapsed their economy).

The ironic thing about this performance is that all of the singers involved have excellent voices—no wobbles, strained high ranges or ugly timbres, and most of them have excellent diction—which is considerably different with many of the classical vocal CDs I’ve been listening to (and occasionally reviewing) of late. If Kabir Sehgal can round up such a large group of good, competent, trained voices, why can’t the producers of modern lieder and opera recordings?

Bottom line: Angela’s Ring is a nice, fun diversion to listen to but not a really first-rate work of art.