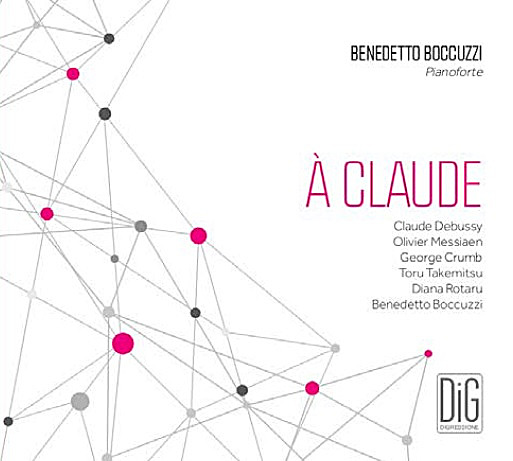 The notes for this CD by Fiorella Sassanelli tell us that Benedetto Boccuzzi is a young pianist, just 30 years old, who “has taken very precise paths in terms of aesthetic and repertoire choices that allow him to present a record that captivates the listener without necessarily being an unprecedented monograph resulting from some musicological discovery or some rare repertoire,” although the music of Diana Rotaru (b. 1981) is indeed rather esoteric and not at all as well known as the other composers presented here. Boccuzzi, who performs regularly in Europe, says in the booklet that he feels “like a magician who pulls fantastical inventions out of a box of wonders.” This CD is scheduled for release next week (February 15).

Certainly, his approach to Debussy’s music is on the ethereal side, and he uses this composer’s music to bookend his recital, the Images at the beginning and the Deux Danses at the end. Yet despite his light touch and use of pedal, his Debussy is not mannered or otherwise Romanticized; it bears a strong resemblance to the way Michael Korstick plays this composer’s works. His choice of the remaining repertoire on this CD is meant to show Debussy’s influence on later composer who wrote in entirely different styles based on the same basic aesthetic.

Despite being Italian, his style sounds more deeply rooted in the French school of playing, similar to Casedesus and even in some respects like Cortot. It also helps that the microphone placement is perfect, fully capturing Boccuzzi’s sound as if he were playing in your living room and not trying to emulate an empty concert hall. He is also a master technician who can make the most difficult passages sound easy without being glib. And when he moves from Debussy to his own somewhat strange (quasi) Notturno, one recognizes the connection to Debussy despite his sometimes playing the inside strings of his instrument, not for cheap effect but for color and emphasis. This piece is much more harmonically daring than Debussy, and has a less definite form; at times, it sounds as if he was also whistling softly while holding down a low bass range chord. From there he moves on to the music of George Crumb, which is not so different in style from his own, and he plays it very well indeed.

And just as Boccuzzi shows the links between Debussy and his own music, his own music and that of Crumb, he then turns to Messiaen as an earlier link between them all. Boccuzzi also plays Messiaen a bit crisper and less Romantic than many French pianists do, yet still maintains a light, airy feel for the music.

As it turns out, Rotaru’s Debumessiquise is another piece in the Messiaen mold, combining amorphic mood moments with more structured components, including some fast keyboard flourishes. From Messiaen and Rotaru, we then move on to Takemitsu, whose music is even more abstract yet within the same basic school. Boccuzzi then returns to Debussy to wrap things up in his own transcriptions of the Deux Danses for harp and orchestra.

It is such a pleasure to hear a pianist with an imaginative recital combining music from the early 20th century to later in that century as well as from the 21st. Would that more artists had Boccuzzi’s artistic imagination and open mind!