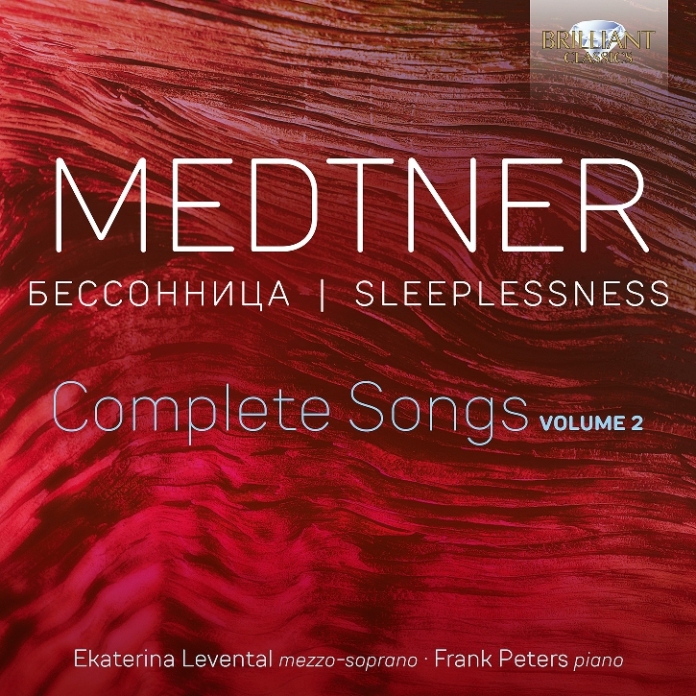 Following on the heels of her very fine album of Medtner’s songs released last summer, Ekaterina Levental presents here Vol. 2 in her series. One thing I really appreciate is that she is recording his songs in strict chronological sequence rather than skipping around.

And as coincidence would have it, this album duplicates 3/4 of the songs included on Sofia Fomina’s album, which I reviewed in January. Comparing them shows considerable differences, primarily in tempo and phrasing: Fomina and her pianist, Alexander Karpeyev, take the songs faster than Levental and Peters, and although Fomina is a fairly good interpreter, Levental is just that much deeper. In addition, Levental’s handling of her voice is much more virtuosic: she shades her voice better and produces more “colors” as she interprets the texts. In general terms, then, Fomina is a good operatic soprano who can sing lieder, but Levental is a lieder singer of exceptional gifts, the kind of singer who grabs your attention with subtlety as much as the ability to open up when she wishes to. Listening to a song such as “Retrospect,” second of the 6 Poems, Op. 32, one hears an almost intimate presentation. Fomina, good as she is, is more of an “outward” singer whose interpretations as good in a general way, whereas Levental is an artist who communicates on a more intimate level.

As mentioned in my earlier review of Vol. 1, there are a few exposed high notes, particularly when Levental has to leap upwards in her range to reach them, which have a bit too open and edgy quality, but this is not a constant in her singing. What is constant is her ability to add or drain vibrato from the voice, to color her tones, and to get deep into the heart of the poetry that Medtner has set to music.

By now, I would think that most classical listeners have gotten used to Medtner’s idiosyncratic style, tonal and melodic but far from predictable. The harmonies he used were very Russian but they often change and move around in response to the changes in the melodic line. In this respect, he was as much a modern composer as was young Stravinsky, the difference being that he did not stray much further from this aesthetic as he aged. But the music is good because it is completely unpredictable. You can never say, as in the case of Rachmaninov, where the music is going; you can only hear that by listening, and often being surprised and even amazed by the wide scope of his music.

What I like most about Levental is that this intimacy is achieved without ever sounding coy or mannered. Every phrase has a natural feel to it, like a great poetry reader who just happens to also have an excellent singing voice. She never seems to be doing what she does for effect, as if to say to the listener, “Listen to all the things I can do.” She does them because that is her very personal response to the poem underlying each song.

Since the liner notes tell us that pianist Peters is a tireless advocate of Medtner’s music, and that in Levental “Frank found the ideal partner to fulfill his long cherished wish to discover, spread and record Medtner’s vocal work,” I would assume that he is the driving force behind this project. Despite his British-sounding name, he is a Dutch pianist who teaches at the Conservatory of Amsterdam. How a Dutch pianist became so enamored of the music of this wonderful misfit Russian, and how he and Levental met, is not explained, but I’m glad they did. Like the singer, the pianist also takes a more poetic view of these songs, thus I would assume that it was under his guidance that she developed this very intimate way of presenting the music. Yet both artists are listed as co-producers of these CDs, which means that they have put up their own money in order to disseminate Medtner’s music. How wonderful is that?

As the album progresses, you’ll have a hard time believing that this is mostly the same material in the Fomina album…it all sounds so different when played and sung in a poetic, less strict manner. What was an interesting experience in the Fomina album is here converted into a deep and meaningful presentation of music and text.

The booklet tells us that this series will run to five volumes. I look forward to the remaining three.