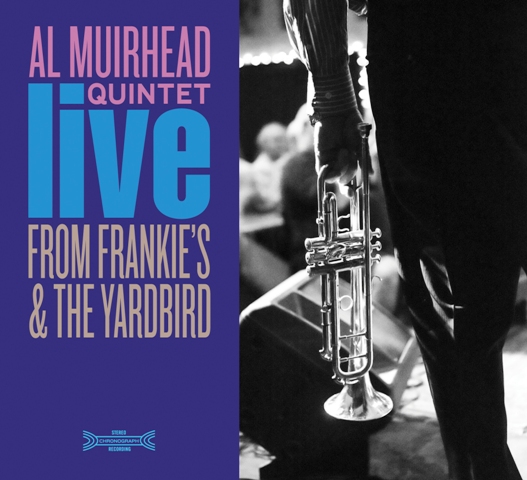 We here in the U.S. continue to learn a lot about the Canadian jazz scene, particularly of those musicians who mostly stayed in their home country. One such is Al Muirhead, a bop trumpeter from the 1950s born in 1935. That would make him no less than 82 or 83 years old at the time of this live session in Edmonton, which is astounding for a brass player. Even more astounding after such a long career is that this was his first live recording.

But by God, Muirhead delivers, as does his extremely lively quintet. What sounds like a trombone on the first track is actually Muirhead playing bass trumpet, which he sticks with through most of this set. His solo, though not modern in the sense we think of today, is still well thought out. His tenor saxist, Kelly Jefferson, is also very fine, and thank goodness guitarist Reg Schwager plays in a jazz style and not a rock style. Even more surprising, he is not one of those wimpy jazz guitarists who play as if they’re afraid the strings might break if they swing too hard on the instrument. He has a wonderful sound, more like George Barnes or Charlie Byrd than like many modern players.

In fact, this entire quintet synchro-meshes brilliantly albeit, as noted above, in what is now considered a retro style. But after hearing so many young bucks attempt to sound “different” by playing squeals and blats, it’s nice to hear real jazz without pretension or artifice. On Ghost of a Chance it is Jefferson who states the them and plays the first solo. His tone is flat and tubular in the Sonny Rollins-John Coltrane mold, eschewing any hint of vibrato, and his two choruses are very well shaped and created. Muirhead follows, again on bass trumpet, for a half chorus before we return to Jefferson for the close.

The whole quintet really gets into Clifford Brown’s evergreen Joy Spring. This is home cookin’ for someone like me, and I loved every second of it, particularly Jefferson’s solo, though Muirhead’s is good as well.

On Mona Lisa we finally hear Muirhead switch to regular trumpet, and he plays superbly for a man his age, with a nice tone and good lip control. I don’t think I’ve ever previously heard a jazz performance of this gorgeous song, but I thoroughly enjoyed this one, particularly Swainson’s highly imaginative solo.

But the whole set is fun to hear. The quintet is laid back and creative from start to finish, and if I haven’t mentioned the rhythm section—which includes two different drummers because these were in fact two different sets recorded at two different times—it’s only because they are solid timekeepers who avoid flash but know how to keep the music sounding light and airy. Bassist Neil Swainson plays in a light and airy style as well, taking a solo here and there in addition to also buoying the rhythm.

Well worth checking out.