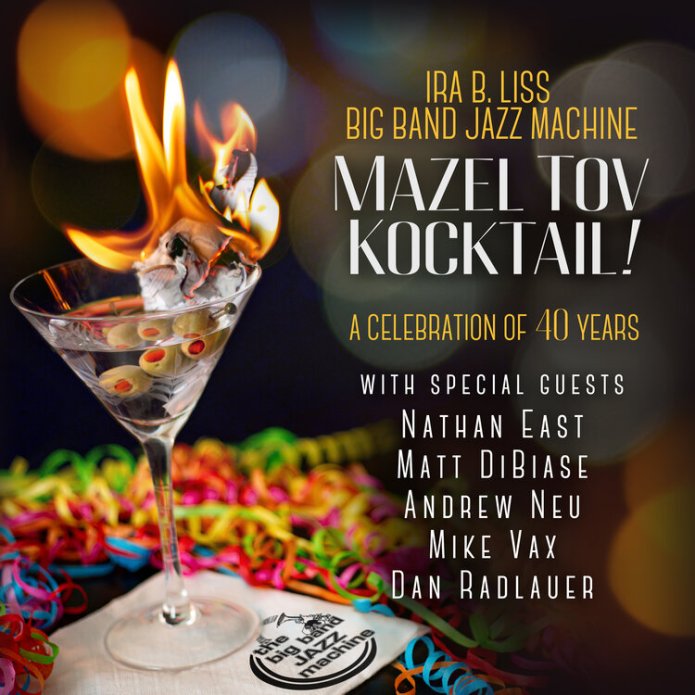 All I could really find online about Ira B. Liss is that he’s 6 foot 7 and leads this hot big band from San Diego. One’s first impression is of a good, tightly-knit organization that plays with fire but no really discernible style, but if a generic “Tonight Show Band” type of group is good enough for you, you’ll clearly enjoy this disc.

And make no mistake, this band can really cook, as they say. Despite my comparison to the old Tonight Show band under Doc Severinsen, they’re tremendous fun to listen to. All of the soloists play good, professional choruses that fit into the concept of whatever piece they’re currently doing without standing out as interesting or innovative.

What makes the CD intriguing is the varied material chosen for this set. The opener, Gimme That by guest tenor saxophonist Andrew Neu, is a real butt-kicker, and it’s interesting to hear big band arrangements of tunes by Chick Corea and Clifford Brown…I don’t think I’ve ever heard an orchestration of Joy Spring before. Three of the numbers here were written by guest accordionist Dan Radlauer, and at least in the first of these, Keys to the City, one hears some interesting touches in the orchestration and an unusual theme. It also has a truly interesting flute solo by Greg Armstrong, who also doubles on tenor sax in the band.

Singer Carly Ines, who also plays trombone in the band(!), sings High Wire in the soft, generic-sounding style so popular nowadays, but on Duke Ellington’s Love You Madly she’s much more interesting and more swinging—she even scats a little. On this track, too, tenor saxist Armstrong plays two really good choruses. Guest musician Nathan East plays the funky solos on Bass: The Final Frontier. He’s good, but will not erase memories of Jamaaladeen Tecuma or Jaco Pastorius.

The second singer on this record, Janet Hammond, doesn’t quite have as good a voice as Ines, but she too can swing and also sing “out.” Tyler Richardson plays a good alto chorus here as well. The title tune of this CD (Mazel Tov Cocktail) is a klezmer-styled piece that’s fun to listen to and features the composer, Dan Radlauer, on accordion. The arrangement isn’t quite as loose as the old Klezmer Conservatory Band, but the combination of a tight ensemble and klezmer touches is interesting, and the piece contains a couple of unexpected changes in meter. April Leslie plays the ubiquitous clarinet solo.

Hammond also sings on Charles Trenet’s I Wish You Love, which she and the band lift up rhythmically. It’s far better than Trenet’s original version, that’s for sure. The composer of Springtime is not identified, but the arranger, Peter Herbolzheimer, is. It’s not a particularly interesting piece though the arrangement is very clever and lifts it up a bit. Carly Ines returns to sing Jon Hendricks’ lyrics to Joy Spring, along with Jeff Beck’s trumpet solo. Although good, it’s just not in a class with Clifford. Sorry.

After George Stone’s blistering-hot West Wings, the CD concludes with Rodgers and Hart’s famous tune Where or When, which again features Hammond on vocal. I have no idea why so many jazz records nowadays end with a ballad instead of an uptempo number, but that’s the case here.