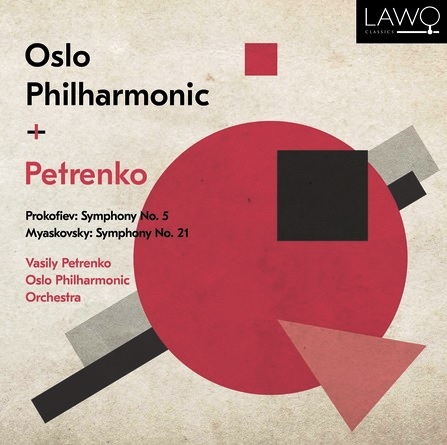 This is exactly the kind of CD that I welcome and treasure: an outstanding performance of a famous Russian work, Prokofiev’s Fifth Symphony, paired with a relatively obscure one, Nikolai Myaskovsky’s 21st Symphony. Both were written in the 1940s, the Myaskovsky in 1940 as a commission from the Chicago Symphony Orchestra (then under Frederick Stock) to celebrate that orchestra’s 50th anniversary, the Prokofiev in 1944. There is a connection between the two composers since the decade-older Myaskovsky was a good friend of Prokofiev, and they died only three years apart, Myaskovsky in 1950 and Prokofiev in 1953.

And what a great performance of the Prokofiev this is! I would place it on a level with the great rendition left us by Artur Rodziński with the New York Philharmonic-Symphony, one of the first recordings made of this work. It is lyrical and powerful in turn, giving full weight to Prokofiev’s score, which the composer considered his finest of his symphonies. The Oslo Philharmonic plays their hearts out for him, giving it all they’ve got.

The Myaskovsky symphony is considerably shorter than Prokofiev’s…in fact, at 15:13 it is just one minute longer than the first movement of the Prokofiev Fifth. It opens with a very Romantic-sounding melodic line, very much in the tradition of his composition teacher, Rimsky-Korsakov, but before long one hears a touch of modern harmonic movement, possibly influenced by his younger colleague. Then, at the 4:18 mark, it suddenly moves into a brisk Allegro theme which is surprisingly long, and which then moves back to the Andante feel of the opening for yet another theme.

Though there are some nice harmonic touches, it is clearly not as modern sounding as the music of his younger colleague, but I’m sure it pleased the musically conservative Stock. The mood thus goes back and forth between quiet-reflective and louder-energetic, but Myaskovsky manages to tie these two moods together with great skill. The development section, also taken at a quick tempo, is interesting and shows a well-grounded composer who knows what he is about.

This is a very fine CD, and if the Myaskovsky doesn’t impress you much, you simply must hear Petrenko’s reading of the Prokofiev. It’s a sizzler!