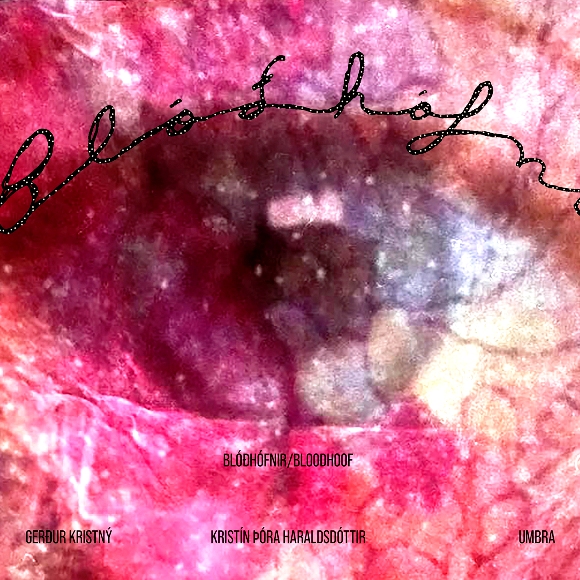 And now for something completely different, as John Cleese used to say every week on Monty Python’s Flying Circus. Kristín þora Haraldsdóttir, an Icelandic actress, violist and performance artist, has created here a sort of Meredith Monk-like piece for a small group of voices and instruments based on the poetry of Gerður Kristny. To quote the liner notes,

The poetic cycle is a reevaluation of an Old Norse mythic poem from the Edda, in which the giantess, Gerður Gymisdóttir, is abducted from her homeland Jötunheimar, or the Land of Giants, to be forced to marry the god Freyr in the Land of Gods. The original poem, Skírnismál, has, since Viking times, been commonly understood as a love story, framed around the journey of the servant, who rides his horse, Bloodhoof, to the Land of Giants to seize Gerður for Freyr, using threats of violence to her family, eternal pain, and finally rune magic to succeed in his mission and abduct her. This contemporary retelling is told by the giantess herself. This shift to first-person narrative redefines what has been traditionally perceived as a love story into one of abduction and violence. In Gerður Kristný’s own words, “Gerður Gymisdóttir’s story is a clear case of human trafficking”.

And so the music moves from a calm but strange opening to louder and more violent-sounding music as the abduction takes place. The musical blocks used are relatively simple and tonal, in fact normally spanning no more than five or six notes, but the extremely strange underlying instrumental sounds are a modern version of ancient instruments, which give the whole proceeding a bizarre sound. The piece is like Monk’s music in its frequent use of repeated rhythmic phrases, but quite unlike her work in that words are sung, not just vowel-oriented syllables.

Unfortunately, the accompanying booklet contains no texts or translations, but simply by imagining the story as it unfolds one can imagine the situations of each piece within the cycle. Thankfully, Haraldsdóttir and the other vocalists used here all have clear, unsullied voices and great diction, and they (but especially Haraldsdóttir herself) inflect their singing with great feeling, which makes the story a little easier to follow. Sometimes, as in the seventh track (“Niú nædtur”), the background tends towards a drone effect, but thankfully this is not a device that is overused.

Perhaps I’m letting my imagination run away with me, but I could see this piece being most effectively performed in a small, dark space with a few colored spotlights on the performers. In any event, it’s the kind of music that leans towards darkness anyway, if you know what I mean. Despite its being “modern music” (Haraldsdóttir is only 38 years old as of 2020), it has that “ancient” sort of sound that harks back to the early Middle Ages.

In any case, the music is extremely creative, albeit in a very feminine way. Speaking as a woman, I think that many male listeners would not respond as well to the music, and especially the plot twist, the way a woman does. You have to understand what it’s like to be a “second class citizen” in virtually every country in the world to understand the kind of feelings projected in this piece.

Despite its essential simplicity, this music resonated very deeply to me. I felt every emotion, every change of feeling and every event large and small in Gymisdóttir’s saga as if I were watching it unfold in slow motion. How different is this from Isolde’s abduction by Tristan to wed King Marke? Not at all, but at least Isolde was able to escape that form of bondage by drinking the magic elixir and falling deeply in love with Tristan. Poor Gymisdóttir was simply forced into a relationship he didn’t choose, just like Elisabetta being forced by politics to marry King Philip II of Spain. Even to this day, in far too many cultures and particularly in many religions, women are still treated as objects, not as people with feelings and minds and a determination to be self-sufficient.

OK, enough on the personal issues. I think you can get some idea of what appealed to me just from my description of the music itself. Recommended to those with the wit to understand.