I ran across this recording by accident in the Naxos website for reviewers and, since I missed its release in 2013, I decided to take a chance on it. I’m glad I did, because it is a real gem.

I’ve heard a fair number of Die Walküre performances and recordings with Jon Vickers as Siegmund—1958 Bayreuth with Hans Knappertsbusch’s funereal conducting, 1961 studio recording with Nilsson, London, Brouwenstijn and Leinsdorf, Karajan both live and studio performances from the late 1960s, as well as the 1968 Met performance issued by Sony featuring Nilsson, Vickers, Ludwig and Thomas Stewart, conducted by Klobucar.

Now, I know there are a ton people out there who prefer their Wagner slow, dragged out and sung in a “conversational” manner, but for the most part I don’t, so bear this in mind as I comment on and review this performance.

To my ears, the best overall Walküre is the live performance that Joseph Keilberth recorded in 1955 stereo with Hans Hotter as Wotan and Astrid Varnay as Brünnhilde. Both were great interpreters and in excellent voice as well, and for me the whole enterprise has a nice theatrical feeling to it. But so does this one in a somewhat more limited capacity.

Perhaps the greatest weakness, not from a vocal standpoint but from a theatrical one, is Otto Edelmann’s Wotan. He clearly had splendid voice, well suited in both size and timbre to the role, but at least from a purely aural standpoint he’s about as subtle as a Mack truck, and in Wotan’s Farewell he jumps the beat and loses track of the music, an egregious error which one should be prepared for. But I can live with it because he was such a splendid singer; if the lapse in the farewell bothers you, just replace the bad patch with the correct performance he gave with Dmitri Mitropoulos on February 2, 1957.

The rest of the cast is, in my personal view, as good as it gets. Here we get Nilsson in her 1961 prime, not in her 1968 mode when she was pushing the voice a bit more to get the notes out. As one critic once said of an Enrico Caruso performance in 1918, “he used to be a gusher; now he’s a pumper.” In 1961, Nilsson’s voice was still a bit on the brassy side but here it cuts like a silver sword rather than sounding like a factory whistle at five o’clock. My sole complaint is that she does not sing the written trills in “Ho-yo-to-ho,” but then again, very few Brünnhildes do (Varnay did sing them in 1955).

Irene Dalis, as Fricka, sounds a bit too beautiful of voice at times, but in other moments she lashes out at Wotan with great dramatic effect. But the real surprises, to me, were “young” Vickers—in 1961, his voice was brighter and had a pleasing, regular vibrato which disappeared by 1963 as his voice started to become even larger, warmer and more baritonal—and Gladys Kuchta as Sieglinde. I will grant you that Kuchta did not have as glamorous a voice as Leonie Rysanek or Gré Brouwenstijn, but she had qualities that they lacked. For one thing, she sounds young and impetuous. When was the last time you heard a Sieglinde who really sounded young? (The amazing thing is that Kuchta was already 46 years old at the time and had been singing professionally, mostly in Germany, for two decades by this time.) For another, she really interprets the words and projects a real character rather than just singing the notes, and I will argue that this is all Rysanek really did in this role was sing the notes. 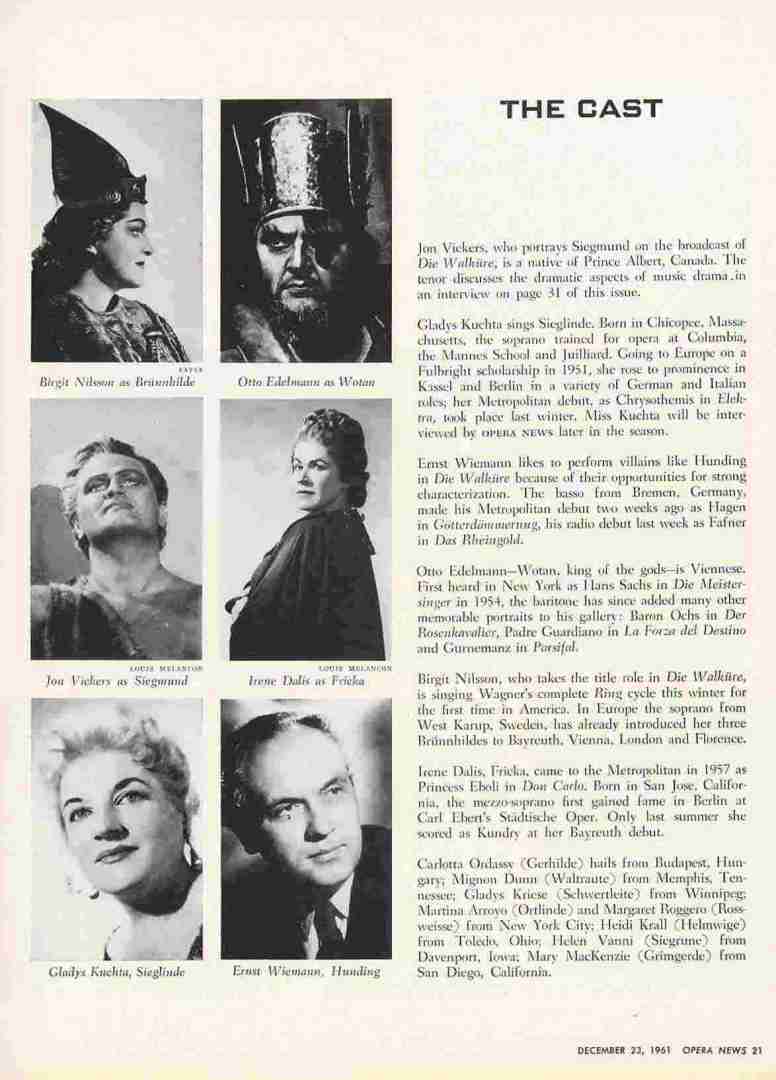 Yet perhaps the biggest surprise to me was the sound quality. For a Met broadcast, this has absolutely phenomenal sound. Rather than the usual flat, two-dimensional quality that afflicted most Met broadcasts from the 1930s into the 1970s, this one has surprising roundness and captures the resonance of the old Met. As a result, everyone sounds normal and not compressed, and this applies to the orchestra as well as the singers. It is just a shade less impressive than the average stereo commercial recording of that period.

Compared to his studio recording, Leinsdorf conducts a more supple performance as well, though he is exciting in those moments when the music is meant to sound more impetuous. I will grant you that his cast for the studio recording is better, but John Culshaw ruined it by placing the voices “in the middle” of the orchestra instead of letting them sing out. As a result, even such huge voices as Nilsson’s and Vickers’ sound as if they were recorded in the lavatory down the hall from the orchestra. Here, the balance is natural and clear.

Say what you want, but for me this is now one of my favorite performances of Die Walküre. I even prefer it to the 1950 Furtwängler-La Scala performance with Flagstad, Frantz, Treptow and Konetzni, which up until now was my favorite mono recording of the opera.