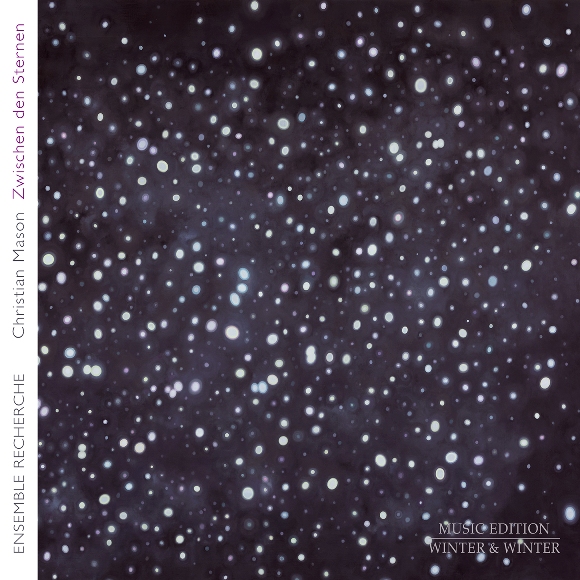 Young composer Christian Mason (b. 1984) presents here an extended fantasia for prepared and regular pianos, strings and percussion in which he attempts to capture the feeling of the stars. It’s a strange piece, to be sure, using microtones in the manner of Julián Carrillo or Harry Partch but in his own personal style. The music moves quite slowly at first, with a piano playing a repeated, isolated notes while the Scordatura strings (instruments purposely tuned to produce dissonance and discords) slither around it, Nor is it just the opening that moves slowly; so too does the development section. The piece is divided into six titled sections with two unnumbered Interludes, the first between I and II and the second between III and IV.

It’s difficult to say who the target audience is for this music. It is clearly too dissonant and complex to appeal to most listeners, and so far as I know (I may be wrong) the number of those who like this sort of piece is relatively small. Yet it is clearly a creative and interesting piece, and I can imagine it being played in a darkened room with projections of slowly-moving stars on the ceiling of the concert venue. About 52 seconds into the first Interlude, the music picks up a bit in pace and becomes much louder, but then recedes again from the sound barrier. That is when the percussion kicks in: drums, cymbals and such instruments as Tibetan cymbals on snare, Sengalese drums, African slit drums, crystal bowl and “3 small pieces of metal with indefinite pitch.” Despite this array of percussion, the piece only becomes noisy intermittently and then quiets down as the music progresses.

By and large, Mason’s development is minimal and kept within a relatively narrow range although the violin and viola skitter around as things change, following which one hears the woodwinds (oboe, bass flute, bass clarinet etc.). It certainly creates a strange ambience. In many of my reviews I’ve complained of the music being recorded with too much resonance, but in this specific case I would say that it is possible recorded too clearly; a bit of ambience around the instruments would surely have given the piece a more “unworldly” sound. As it is, every instrument one hears stands out like cacti in the desert sun, which has the effect of bringing the “star sound” very close to one’s ears without a buffer. You, however, may feel differently from me.

I found the music very interesting for long stretches of time but, as a total piece, a bit overlong. Although Mason does not actually repeat anything, one gets the feeling of déjà vu as it progresses.

As I said earlier, this is clearly not a CD for everyone. I admit enjoying the listening experience for the purpose of this review, but it is not a piece I would play again, at least not for a long time. Just a bit too bizarre without seeming to have a real purpose other than shocking the listener.