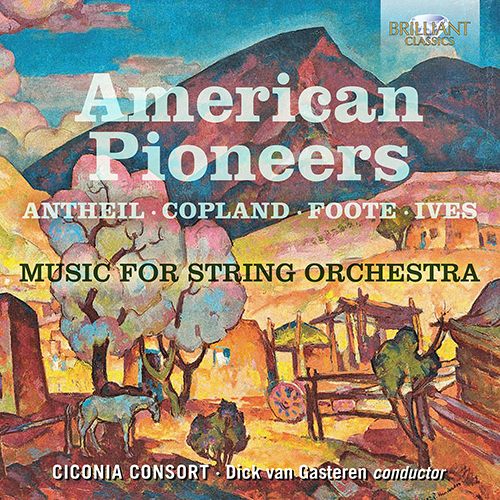 The Ciconia Consort, a.k.a. The Hague String Orchestra, is a group of 20 musicians founded in 2012. This disc focuses on the music of American composers who their conductor, Dick van Gasteren, has characterized as pioneers.

We start our journey with Arthur Foote, the Wagner-and-Brahms-influenced American pedagogue who made it to age 84 (1937), by which time his music was considered to be part of the past, but his string Suite in E is a lively piece with many interesting turns of harmony. Van Gasteren, who studied conducting with Bernard Haitink, is a lively interpreter who gives the music lift and drive.

Interestingly, the Antheil Serenade No. 1 dates not from his most adventurous and fertile period, but from 1948, by which time he had settled into more traditional forms, yet the piece does sort of combine a Stravinsky-ish feel with American rhythms, at times leaning towards jazz. The slow second movement, however, is moody and a bit eerie, with somewhat ominous string tremolos and spot solos.

The Ives Hymn, though written in 1904 when the composer was 30 years old, is a bit more conventional than many of his later works but is already leaning towards bitonality. We wrap up the program with the ever-popular Appalachian Spring of Copland in the arrangement for just 13 string players.

Although this is a fine program and very well played, a bit more imagination could have gone into it. The Ciconia Consort could have picked more imaginative pieces by both Ives and especially Copland, whose more avant-garde pieces of the 1920s and early ‘30s are still not all that well known, and they could have added a piece by the most avant-garde of all American composers of the 1930s and ‘40s, Harry Partch. Otherwise, a nice disc.