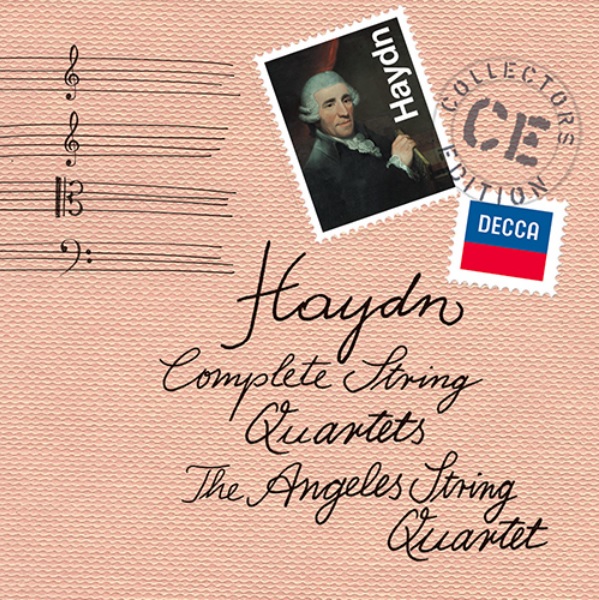 I’ve written a few articles on this blog stating why music lovers should hate record companies, particularly the big labels, but this one really takes the cake.

Here’s the background. In 1988, violinists Kathleen Lenski and Sara Perkins, violist Brian Demboe and cellist Stephen Erody, all highly skilled West Coast musicians, formed the Angeles String Quartet. For years they were hailed by critics who heard them as one of the best, if not the best, American String Quartet, but nary a recording contract did they get. Then, in 1994, the Joseph Haydn Society, having heard tapes of their performances of that composer’s string quartets, agreed to subsidize their recording a complete set of them. (To the best of my knowledge, this was only the second time they did this; the first was in the 1930s, when they engaged the Pro Arte Quartet to record the series for EMI, but both the Depression and the onset of World War II put a stop to the series before they were a quarter of the way through them.) Philips, one of the three Polygram classical labels, took the bait. Over a period of five years, from 1995 to 1999, the Angeles musicians dove into Haydn with both love and zeal. 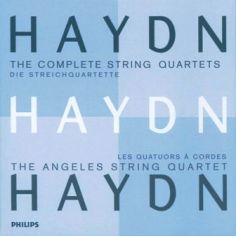 Then the complete set—21 CDs, which made it pretty pricey—was released in 2000 in a cheap box with no promotional support at all, and the set was quickly deleted. But the few lucky critics who got to hear it raved over it as they have few other classical box sets of this magnitude. Mark Swed of the Los Angeles Times wrote that “There has never before been a completely satisfying set of the complete Haydn string quartets. Now there is.” Peter Bates of ClassicalNet wrote, “nothing prepared me for the utter consistency of this set. The players not only demonstrate a thorough knowledge of these pieces – not difficult like Bartók’s but not facile either – they also respect the eras in which they were forged. No attempt is made to create nascent scherzos out of the minuets in the later works (although there is sly humor in Op. 76, #2, “Quinten”).” David Hurwitz of Classics Today was perhaps the most effusive, raving about the set thus:

One of the biggest challenges in playing Haydn involves timing, particularly of pauses. Haydn was a master of dramatic silence, and he used it in a number of ways, ranging from the disturbing to the comic. An example of the first quality occurs in the first movement development of the G minor Quartet Op. 20 No. 3, where a tiny little melodic “turn” upsets the course of the development section. The famous finale of the “Joke” Quartet (Op. 33 No. 2) shows Haydn using silence to hilarious effect. In both cases, the Angeles Quartet perfectly times the passage in question so as to maximize its emotional impact. The group responds equally well to such a diverse range of moods as the almost painful emotional outburst in the trio of Op. 54 No. 2’s Menuetto, the ethereal magic of the “Horseman”” Quartet’s slow movement, and the grim austerity of the final fugue of Op. 50 No. 4 (the remarkable quartet in F-sharp minor). In those neglected early quartets, beginning with the ten history-making five-movement “quartet-divertimentos”, the Angeles Quartet plays with an engaging and unflagging sense of freshness and vitality.

Only some British reviewers, carrying a torch for the old Amadeus Quartet (which did not make a complete set and did not observe most repeats), nitpicked on it, but only a little. Witness Misha Donat on Classical Music who said that some of the endings seemed “too final,” with slight ritards, rather than just stopping in tempo, but by and large lauded the Angeles Quartet for having made “by and large an impressively successful project. Its only direct rival is the 22-disc Decca set by the Aeolian Quartet, but those rather laborious performances, poorly recorded into the bargain, are no match for the poise and elegance of the American players.”

The earlier complete set on Naxos by the Kodály Quartet, which started with real energy but somehow over the years become a bit stodgy as they approached the finish line, was quickly forgotten. So too were many other earlier sets, complete or incomplete. The Angeles String Quartet’s versions of this massive oeuvre—the set only omits the disputed Op. 3 Quartets, now considered to have been written by Roman Hoffstetter (though there is still some debate on that), and the quartet version of The Seven Last Words of Our Saviour on the Cross—was now the clear choice. And to everyone’s surprise, probably and especially that of Philips, the set won a Grammy for Best Chamber Music Performance at its January 2001 ceremonies. 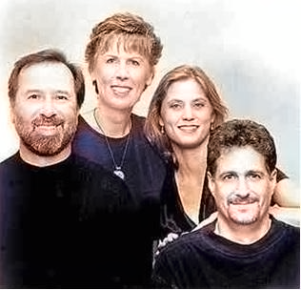 But bad luck dogged the Angeles Quartet. By getting little or no promotional “bounce” from the release of the set, their engagement calendar was simply not enough to keep them going. On November 8, 2001, they announced that they were disbanding. Each of the four members went into teaching at different music colleges and conservatories, where they remain. Except now they are touted on those institutions’ websites for having been part of the greatest set of the Haydn quartets in recording history.

And get this, folks: even after the Grammy win, Polygram still did not “get it.” Yes, they reissued the set on Philips’ sister label Decca with the cover shown at the top of this review, but again with little or no promotion. Worse yet, for no apparent reason whatsoever, Decca decided to record a COMPETING set of the complete Haydn quartets by the Aeolian String Quartet, a group that has a strident, whining first violinist who goes off-key frequently and has a brittle, annoying tone. And THIS is the set of the Haydn Quartets they pushed to the max with a heavy promotional campaign.

I’ve had a lot of readers of this blog ask me to review new recordings of older classical music that has been recorded frequently, and in some cases I’ve done so only to complain that the recording(s) were superfluous because there are so many superior, older versions out there. But I still utterly fail to understand why record companies continue to record the Same Old Stuff (you see, I used a polite word there!) when there is so much music written from 1970 on that hasn’t been recorded, or only recorded once, not to mention a few outstanding past composers whose work gets short shrift.

The set of Haydn quartets is a perfect example of perfection achieved but, due to marketing, marginalized both in the beginning and now after the fact. It’s not the first time, nor will it be the last, and I’ve been reading some horror stories on the Slipped Disc website of how laissez-faire the recording industry has become. Although classical music lovers are still, by and large, the biggest market for physical CDs—only about 40% of classical lovers have abandoned CDs altogether, compared to nearly 70% of jazz fans and an even larger percentage of rock and pop listeners—the attitude of the industry has become far less amenable to classical performers unless they have a VERY high-profile name. The rest of those artists, particularly those who have not established themselves as “one of the greatest fill-in-the-blank of his/her generation,” are treated like chattel.

Consider, for instance, the situation of the German coloratura soprano Simone Kernes, who has now left all record labels and taken to selling her recordings for download on Bandcamp. In an interview with the Munich Abendzeitung, she complained (according to Slipped Disc) that “I had an exclusive contract for ten years. The record company pays for the recording and you get a small fee. You have to recoup the album costs through sales, only then do you earn a small share. So if an album doesn’t sell extremely well, you see: Nothing! With the record company I did everything myself: ideas, song, selection, cover. I also wrote the booklet. I was exhausted, it was never paid for. For the last CD, Inferno Paradiso, I also did the advertising myself, I got a promotion agency that was paid every month. I considered doing Eternity again through the record company, but the offer was too bad. I wouldn’t even have gotten my money back. So I said: I’ll try it myself. And that’s how you keep the rights to the recordings.”

Also witness what the cast and conductor of Navona Records’ excellent new Tristan und Isolde had to go through, exhausting work for which they were not paid. Their main hope is to get some kind of career “bounce” out of the publicity for and sales of the recording, but in the Age of Covid, where on earth are they going to stage another Tristan? They can’t even do it in Poland, where the 2019 recording and performances took place.

But to return to this set of the Haydn Quartets, it really is superb—but I suggest taking it one disc at a time. Haydn didn’t write all of these quartets in a few days, thus you should space out the experience. As one critic has said, Haydn doesn’t converse with angels like Mozart or storm the heavens like Beethoven; rather, he invites you in for a large glass of wine and an evening schmoozing around the fire. His music has elegance, but also drama, sparkle and plenty of wit—so many of those little pauses that have to be times just right for them to make their point, which the Angeles Quartet does to perfection. No wonder the Joseph Haydn Society was so impressed. You will be, too.