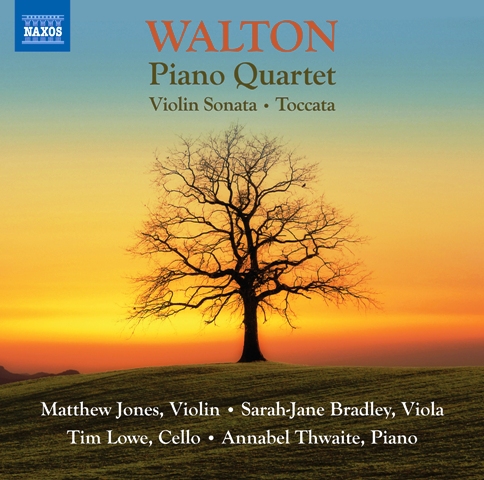 William Walton, like Sir Arthur Sullivan, was never comfortable with the fact that his highly original and entertaining Façade  overshadowed his more serious works, but in many instances (the First Symphony being just one of them) his more serious scores tended towards bombast. Of his orchestral works, I very much like Balshazzar’s Feast, the Cello Concerto and the Viola Concerto but not much more than that.

On this new recording, however, we begin with a really fine work, the Piano Quartet. Perhaps it is so good because Walton continued to tinker with it over the decades after he originally wrote it in 1918-19, the final revised version as presented here being made in 1974-75. As the liner notes indicate, its gestation is also somewhat obscured by the fact that the original score was lost in the mail for more than a year, thus postponing its official premiere in 1924, five years after it was finished. Some revisions must have taken place in between. Walton always liked this piece, once stating facetiously that “it was written when I was a drooling baby, but it is a very attractive piece.” In actuality he was well past the “drooling baby” stage, but it was put together between the ages of 16 and 17. The music not only has wonderful originality and drive, but the second movement leans heavily on the pentatonic scale, something he clearly borrowed from the French-Russian school, and in the last movement he sets up a three-voice fugue between the three strings. Its energy is, ironically I suppose, not that far removed from Façade which was written the year this quartet premiered in Liverpool.

Of course, much of my impression about this work relies on the extraordinarily energetic playing of the four performers, none of whom I have previously heard of. Violinist Matthew Jones, a member of the Badke Quartet in 2007, gave a critically praised solo recital at Carnegie Hall in 2008 and has since become head of the chamber music department and professor of viola (his second instrument) at the Guildhall School of Music. Violist Sarah-Jane Bradley debuted at Wigmore Hall in 1997. As a champion of new works for her instrument, she has played and recorded modern viola concerti over the years. Cellist Tim Lowe recently debuted as a soloist at Wigmore Hall and has played many recitals throughout the UK and Europe. Pianist Annabel Thwaite, who appears to be the youngest member of this group, is well known as an accompanist, having won several awards in that capacity. So although they may not be all that well known “across the pond,” all are top talents in the UK.

The Toccata was written in 1922-23, thus finished the same year that Façade premiered, and it, too, has tremendous vitality as well as ingenuity in its writing. Both violin and piano play fast, driving figures, often supporting one another but sometimes running off in slightly different directions; the pianist is clearly a soloist in this work and not just a chord-playing accompanist. There are some interesting suspended harmonies using extended chords in the slow middle section, and there is a rhapsodic solo violin cadenza at about the 11-minute mark, followed by an impassioned piano solo . Another excellent piece.

By contrast, the 2 Pieces for Violin & Piano are slow mood music, reminiscent of Walton’s film music. My readers know that, with a very few outliers excepted, I consider film music, even when written by known composers, to be the thrown-away chewing gum on the bottom of the composer’s shoes, so I will pass on further comment.

We close with the Violin Sonata of 1947-49, written for Yehudi Menuhin and Louis Kantner and dedicated to the performers’ wives, who were sisters. According to the notes, the use of commas in Walton’s score were misconstrued for decades to mean musical pauses, when in fact they were intended to indicate a clean bow attack. Truthfully, this is not terribly inspired music; Walton seems to be resting on his composer’s laurels. The piano part is wispy and wimpy and not terribly interesting, though it is academically fine in terms of its function. The violin line isn’t that interesting, either; much of the music goes in one ear and out the other. Nonetheless, it is still very well played by Jones and Thwaite.

Basically a fine album, then, that starts out with a bang but ends with not a whimper but a simper.