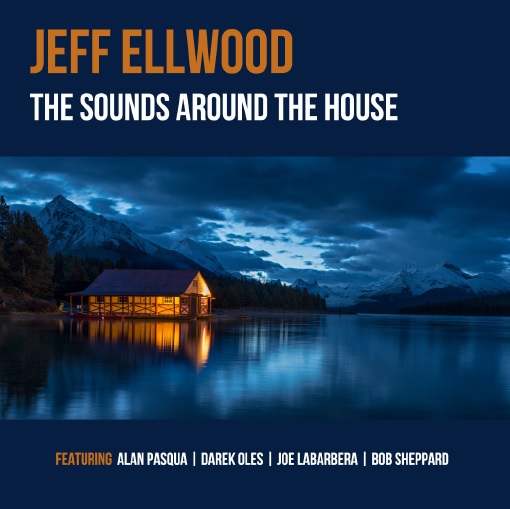 This is the first release by Los Angeles-based tenor saxist Jeff Ellwood, supported by some of the top studio jazz musicians of that area. I was somewhat misled by the calm, peace-inducing cover art and album title into thinking that this would be yet another CD of soft or ambient jazz, but such is not the case. Ellwood is an imaginative player within the jazz mainstream.

Both his tone and his general form of improvising reminded me a bit of Stan Getz who, although from Long Island, was a major influence on the West Coast school of jazz in the 1950s and beyond. More interestingly, although Ellwood swings, and very well at that, much of his playing has “space” in it, and once in a while he plays “outside” harmonically, something Getz never did, with a hard, raspy tone that takes him (and the listener) outside of their comfort zone. In short, Ellwood is a jazz musician with integrity and his own approach to soloing despite his tonal similarity to Getz.

I was also highly impressed by pianist Alan Pasqua. Here is a musician who also harks back to players of the ‘50s, but good ones like Lennie Tristano. He uses a lot of single-note lines played by the right hand and has an excellent sense of structure in his solos. Everything he plays makes sense musically, is coherent, and advances the piece in question.

But then there is bassist Darek Oles, and he, too, is an explorative soloist with a good sense of structure. He doesn’t have a super-powerful tone, but he doesn’t need to; he impressed you with his clarity and swing, and he clearly listens to what the others are playing before he solos. Joel LaBarbara is also a fine drummer, swinging yet subtle. Put them all together, and they are a quartet to be reckoned with, even if they were just together for this one album. (Someone please tell me that they perform together in person, too…they’re far too good to just exist on one little CD.)

Pasqua’s original Agrodolche is a jazz waltz, possibly a slow 6/8 piece, but although it is played at a soft volume it is not a soporific. The unusual melodic line is set over some very interesting changes—not terribly radical, mind you, but interesting, in part because it is a set of changes that uses half-steps up and down chromatically in unexpected places which makes it a little tricky to improvise over. Needless to say, the composer has most of the solo space on this one, but in Ellwood’s solo the saxist surprisingly has his own take on the tune, gliding over the tricky changes with ease. In his second chorus, Ellwood goes a bit outside, suddenly increasing the volume and playing some very gutsy runs that are nothing like Getz.

Old School Blues, also by Pasqua, is another thing entirely, sounding much like the kind of music that Blue Note put out with regularity in the late 1950s, and the whole band really jumps on this one. This track also features a nifty but brief bass-drum duet. With Provence we actually do get a bit of ambient jazz, but once again the melodic line is quirky and the harmonic base somewhat slithery. The group’s performance of the title tune is very ballad-y. Have I mentioned that I generally don’t like ballads? Fortunately, they pick things up again with a fine 6/8 piece titled King Henry, on which tenor saxist Bob Sheppard joins Ellwood to play the melody and in fact takes the first solo, using a harder tone than the leader, sounding almost Coltrane-like. He’s a fine addition to the group, and I wish he had stuck around for another track or two. Ellwood’s softer contours make a nice contrast to Sheppard, but it’s clear that he listened carefully to what the other saxist played, as his own solo builds on and complements it. No two ways about it, Ellwood is a first-rate talent. Barcelona also starts out as if it were a ballad, but the odd bitonal melody, funky beat and slightly quicker tempo save it from being a soporific—that, and the excellent solos, beginning with Oles on bass before Ellwood comes in.

The Honeymoon is another uptempo jumper in the modern blues mold, and here again Pasqua has a sterling solo. Ellwood plays particularly hard tenor on this one, including some lipped chords…not easy to do! We end on a ballad note with For Roger, but Oles’ excellent bass playing keeps things moving behind Ellwood.

This is a very auspicious debut disc for the saxist. Let’s hope he can keep this quartet together for his next release as well.