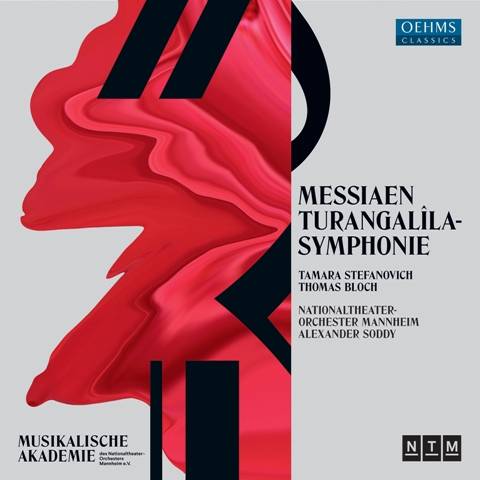 Here a relatively familiar modern work, Messiaen’s Turangalîla Symphony of 1946-48, commissioned by, of all people, ,Russian conductor Serge Koussevitzky, is led in this performance by a rather young and unknown conductor, British-born Alexander Soddy. Born in Oxford, Soddy was trained at both the Royal College of Music and Cambridge University, becoming répétiteur of the National Opera Studio in London in 2004. Having since won lotsa lotsa prizes (don’t they all win prizes nowadays?), he debuted as a conductor at the Metropolitan Opera, Vienna State Opera and English National Opera in the 2017-18 season

Although Soddy’s performance, overall, is a minute and a half shorter than the famed recording by Sylvain Cambreling, this is deceptive. Most of the movements are in fact conducted just a shade quicker than Cambreling, the exception being the massive sixth movement, “Jardin du sommeil d’amour.” Cambreling takes 13:50 to get through it while Soddy zips through it in just 11:12.

But there are more differences between the two performances than just that. In terms of technology, the sound on this new release is far sharper and clearer than on Cambreling’s 2008 recording for SWR Music/Hänssler Classic. In terms of musical style and performance, well, this one has some problems. Despite the generally slower tempi, everything sounds choppier and more episodic. Soddy also takes a very objective, wide-awake approach to the symphony whereas Cambreling revels in the odd Middle Eastern vibe that Messiaen brought to the score. Soddy’s reading is objectively sound and brings out the structure of the music, but this is one of those pieces in which structure isn’t everything. One might be tempted to say that Soddy approaches the work as, say, Rodziński, Toscanini or Munch might have done, but there is one factor that is missing, and that is the emotional energy that Rodziński, Toscanini and Munch brought to everything they conducted. Soddy not only lacks cohesion in phrasing, but also lacks any emotional connection to the music. This performance may as well have been conducted by a robot, or created on a MIDI that could perfectly simulate the sound of conventional instruments.

What surprised me the most was that this recording was taken from a pair of live performances given in November 2019. It surprised me because it doesn’t sound as if it were a performance in which the conductor was trying to connect with his audience; it’s just “there.” But since, as I said earlier, I had never heard of Soddy before, I don’t know if everything he conducts sounds like this. In all honesty, I think that many of these prize competitions he has won judged him on his knowledge of the score and his technical control of the orchestra—important factors in the makeup of any conductor, certainly, but by no means the whole story. Without the element of humanity in the performance, you might as well judge an actor by how perfectly they can move and deliver the lines, not by whether or not they inhabit the character they’re portraying.

I’m sure there will be some readers who disagree with me in my assessment, and that’s OK. I’ve constantly said that a music reviewer like myself only presents one view, which is mine. It is based on a lifetime’s experience in listening to music, but it’s just my view. You may prefer Soddy’s reading because it sounds mechanical and objective. I just happen not to.

Anyway, that’s my feeling about this recording. I’ll stick with Cambreling until another performance just as good or better comes along.