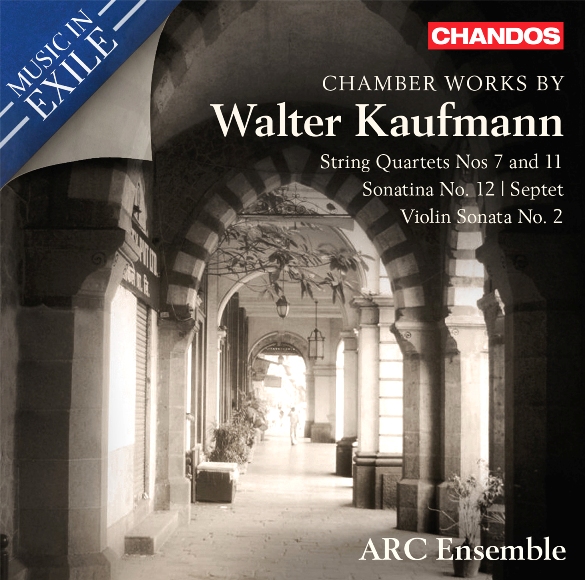 When I first saw the cover of this album, I rolled my eyes. Here we go again: another record company milking the Holocaust to push a Jewish composer banned by the Nazis, and this one, like several others being pushed nowadays, survived the era and in fact lived until 1984. I’ve said many times that as someone of Jewish descent who knew someone who was in the camps, but wasn’t a composer, that I find this not merely distasteful but disgusting. How dare a record company try to make a buck by exploiting the misfortunes of others? And, on top of that, about a third of the composers pushed this way were neither great nor original.

Kaufmann in his twenties

The real tragedy in Kaufmann’s life was that most of his immediate family had either died of privation or been killed in one of two Nazi concentration camps. I can well imagine that this was extremely traumatic for him, and it must have weighed on his mind throughout the rest of his life, but he himself was one of the lucky ones who always seemed to land on his feet. In 1934 he fled, not for England or America, but for Bombay, India, where he became Director of European Music at All India Radio. He spent a fruitless two years in America trying to establish himself as a Hollywood composer, but unfortunately his music was too complex and not in the same vein as the wildly popular Erich Korngold, so he returned to India. After the war, his long-standing position in this, still one of England’s colonies at the time, made him eligible to be considered a British citizen. He then finally moved the Great Britain where the warm-hearted and generous conductor Sir Adrian Boult performed some of his music and allowed him to guest-conduct British orchestras. Armed with a strong recommendation from Boult, Kaufmann landed a post as head of the piano department at the Halifax Conservatory in Nova Scotia. From there, now armed with an endorsement by Sir Ernest MacMillan, Canada’s most distinguished musician and conductor, Kaufmann became music director of the Winnipeg Symphony Orchestra. Over the course of a few years, Kaufmann built this orchestra up from a rag-tag assemblage of part-time musicians (some of whom were window cleaners or shoemakers) into a first-class ensemble. After his first wife divorced him, he met and married a glamorous and talented pianist, Freda Trepel, and they lived happily ever after. In 1956 he landed a position teaching at Indiana University’s School of Music in Bloomington, Indiana, a job he kept for 21 years. So except for his fleeing Germany for India and having his family wiped out, neither Kaufmann nor his music were “suppressed” after the War.

Which is a shame, because his music was utterly fascinating. Here, roughly 40 years before John Mayer came along, Walter Kaufmann fused the scales, modes and melodic contours of Indian music with Western forms. He had been very well trained in the latter by Franz Schreker and particularly Curt Sachs, a disciplinarian who taught the young composer to “organize my thoughts first before I wrote down anything.” (Sachs had also introduced Kaufmann to Indian music via recordings.) The opening piece on this CD, the String Quartet No. 11, is a perfect example of what I mean. After a slow, melismatic opening, the music suddenly gains energy, the tempo increases, and off we go with Kaufmann developing his very Indian-sounding themes along strict Western classical lines. It was a stunning fusion of Eastern and Western cultures; it was ahead of its time; and it was clearly not something that the majority of contemporary classical listeners were going to appreciate. Yet even when the languorous pace resumes and stays in the second movement, Kaufmann was not a composer to wallow in sentiment (no wonder he failed in Hollywood) or waste a single note or phrase. Everything is concise and clearly structured, yet the infusion of the Indian element makes the music deeply affecting emotionally. Oddly, the quick last movement almost has a jazz “push” to the beat; whether coincidental, purposely put in by Kaufmann or the whim of the interpreters on this performance, I do not know, since all of these are first recordings.

By the time he wrote the Violin Sonata No. 2, sometime before 1946, Kaufmann had refined this style a bit further. The music here also breathes the air of India, but there is somewhat more Western influence in the manner in which he develops it—but note how the first movement here echoes the String Quartet No. 11 by moving from a slow introduction to a very fast theme in a minor mode. It’s still interesting, however, particularly since in this movement Kaufmann alternated back and forth between fast and slow sections more often than in the quartet.

The String Quartet No. 7, also based on Indian music, has a different profile, starting out with an edgy, exciting passage in which Kaufmann mixes in a bit of bitonality with his Indian scales, then becoming more relaxed although the tempi and the tension go back and forth throughout the first movement.

And yet, as the CD wears on, one begins to realize that Kaufmann’s obsession with Indian music led to a certain stagnation. He never really moved beyond what he had done in the 1930s and ‘40s, and for better or worse, much of this music sounds alike. Had you not heard the preceding works, the Sonatina No. 12 (here transcribed for clarinet and piano instead of violin and piano) would sound quite fascinating, but after the two string quartets and the violin sonata it sounds like much of the same.

I did, however, very much like the Septet. Though in the same vein as much of the preceding music, it has a sort of Stravinskian edge to its mechanical neo-Classic rhythms, and Kaufmann’s manipulation of the inner voices is simply masterful. This piece, and this one alone, shows me a distinct advance on his earlier style because it is more varied in its rhythm and more complex in its texture.

My impression of Kaufmann, then, is of a good, solid composer who came up with one great idea and worked it to death. I would recommend that his String Quartet No. 11 and the Septet become occasional repertoire pieces for chamber groups; they’re the best-conceived pieces on the CD, and make an excellent impression. But most of the other pieces sound too much alike to suit me. I’d describe him as a clever rather than an inspired composer, yet this CD is definitely worth investigating since he was such a pioneer in fusing Eastern and Western classical music.

3 thoughts on “Who Was Walter Kaufmann?”