Louis Jordan (1908-1975) is often hailed as the father of rhythm & blues and grandfather of rock ‘n’ roll, but not that many rock buffs nowadays have heard much of him. Were it not for the fact that actor Dan Aykroyd played his Decca recording of Let the Good Times Roll in the hit movie The Blues Brothers, many people (myself included) might never have heard him at all.

Of course, being the father of R&B and grandfather of R&R brings him much closer to being a pop artist and not a jazz one, but like Lionel Hampton, who also helped usher in R&B with his 1940s big band, Jordan had strong jazz roots. In fact, before starting up his “Tympany Five” in 1938, he had played alto sax with Charlie Gaines in Philadelphia, later for Chick Webb’s famous jazz orchestra between 1926 and 1938, but left when he realized that his value as an entertainer was being overshadowed by young Ella Fitzgerald. Webb’s philosophy was that Jordan appealed only to black audiences but that Fitzgerald’s voice appealed to whites as well as blacks. He was right about Ella but, as it turned out, wrong about Jordan. From the time that Jordan’s recording of Knock Me a Kiss was released in 1942, he began to hit the big time and, by 1946-48, was outselling Fitzgerald on the same label (Decca).  Ella didn’t hold it against him, though, and as you can see from the above header, she recorded several songs with him, including the smash 1945 hit, Stone Cold Dead in the Market. 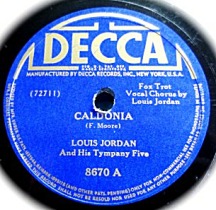 But Chick Webb and Ella weren’t the only two jazz artists to take the rather funny jazz songs of Jordan seriously. Woody Herman’s first Herd recorded cover versions of Don’t Worry ‘Bout That Mule and Caldonia, the latter becoming as big a hit for Herman as it had been for Jordan—a million-selling record, at #1 on the R&B charts for seven weeks and a #6 pop hit. Dave Dexter Jr., publicity director of rival Capitol Records, wrote the lyrics for another of Jordan’s biggest hits, Buzz Me Blues. Although I purposely did not list the exact personnel for these recording sessions in the header, the musicians in his group—sometimes a quintet as advertised, sometimes a sextet and sometimes a septet—included such bonafide jazz musicians as pianist Wild Bill Davis, bassist Al Morgan, former Fats Waller drummer Slick Jones and trumpeter Idrees Sulieman, who played on several of Thelonious Monk’s early Blue Note recordings. And Jordan himself played very good, if not exceptional, short jazz solos on several of his records.

Thus Louis Jordan fits somewhere in between the jazz and rock axis. It was undoubtedly due to the fact that he used more conventional jazz instruments and only one electric guitar that his popularity fell off the cliff after 1951. With such rock screamers as Little Richard and Screamin’ Jay Hawkins coming up and the guitar-laden band of Bill Haley and his Comets coming up, even the most energetic of Jordan’s recordings sounded somewhat pale and passé. He kept on plugging away until the day he died, recording another 114 singles, but none of them clicked. By the time he died in 1975, he was already a forgotten man and musician. Nowadays he has a cult following among those who investigate the “roots of rock ‘n’ roll,” a pretty large minority, thus the impetus for this album.

Jordan created his style by essentially slowing down the “shuffle beat” rhythm made popular by the famous swing band, the Top Hatters, led by former classical violinist Jan Savitt. His gutsy alto style grew out of the “soul” sax players of his day. But his real interest to us today comes from the funny-but-sad character of the lyrics of his songs. Although he sang his songs and didn’t just narrate them, Jordan was also a precursor of rap music. His songs described the sad, funny, whimsical and sometimes heartbreaking condition of African-Americans in his era. Barred from acceptance in both white society and the job market, the unnamed characters in Jordan’s songs took to drink, bad women, fish fries and grabbing chickens out of a farmer’s hen house as a way of getting by in life, and did it all with a smile on his face. The fact that his songs broke so often into the white mainstream of the Top Ten tells you two things, that white society knew what he was singing about but thought it was comical as long as he wasn’t complaining too much about it. In only one song, Mop Mop (a #1 R&B hit that didn’t cross over to the Billboard list), are the lyrics a bit questionable, referring to the black orchestra the musician in question played with a “Zulu band,” but in New Orleans culture it was an honor for a black musician to be made “King of the Zulus” during Mardi Gras (Louis Armstrong was the king c. 1947 or ’48), and of course G.I. Jive was really Johnny Mercer’s smash hit on the pop charts (though Jordan’s version was #1 on the R&B charts for six weeks).

For all its hard-driving R&B beat, Five Guys Named Moe is, in the instrumental break, as exciting a ‘40s jazz record as you’re likely to hear, and in several records one is impressed by the trumpet solos of the little-known Courtney Williams (1939), Eddie Roane (1942-44) and Aaron Izenhall (July 1945, replacing Sulieman, through 1950). Personally speaking, despite my admiration of Bing Crosby as a laid-back, jazzy-styled singer, I thought that My Baby Said “Yes” was a real stinker of a song. It’s also too much Bing and not enough Louis. Of the three duets with Ella Fitzgerald, Stone Cold Dead in the Market is the funniest but most pop-oriented, Petootie Pie has some good scat singing by Ella, and Baby It’s Cold Outside (now considered a taboo song because the feminists think it involves date rape) is excellent, a more swinging alternative to the more famous recording by Dinah Shore and Buddy Clark. Jordan also recorded two duets with the lesser-known but bluesy-styled Martha Davis (Daddy-O, which hit #7 on the R&B charts, b/w You’re on the Right Track Baby). Possibly the most R&R-like song on the album is Ain’t That Just Like a Woman (including a very rock-music-like guitar solo by Carl Hogan), one song I had never heard before. The lyrics of the Tommy Edwards-Jimmy Hilliard hit That Chick’s Too Young to Fry are definitely wrapped up tightly in double entendre. Early in the Mornin’ is an early example of Calypso beat. We end this retrospective with another record I hadn’s heard before, I’ll Be Glad When You’re Dead (You Rascal You) with the great Louis Armstrong, and yes, Louis does play the trumpet in addition to singing–and quite well, too.

This is one of but six reissues of his Decca recordings to come out since MCA put out the first in 1975, the year of his death. The most comprehensive is the 9-CD set of his complete Decca recordings issued by Bear Records in 1992, but there are also one-disc compilations on the Polygram, Jasmine and Vinyl Passion labels as well as a 3-CD set on the Big 3 label and a 5-CD set on JSP Records. The latter is particularly enticing since it is selling for an exceptionally reasonable price on Amazon, but for the non-R&B collector this one-disc compilation might fill the bill. The only recordings missing here that I wished had been included are Do You Call That a Buddy?, Knock Me a Kiss (another tune played by other jazz artists), What’s the Use of Getting Sober?, Somebody Done Changed the Lock on My Door and Open the Door, Richard, but in their place we have his duets with Bing Crosby, Ella Fitzgerald and Louis Armstrong that aren’t on most other one-disc collections…and these were huge hits.

A good cross-section of Jordan in his prime. The transfers are clean and the liner notes informative. If you don’t already have one of the collections mentioned above, this is a good place to start to understand and assess Louis Jordan. Influential he may have been, but all by himself he was unique.