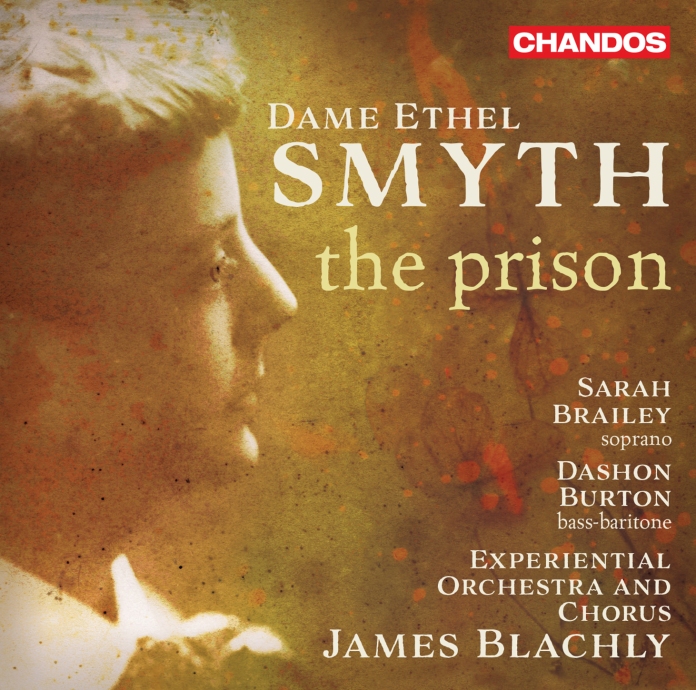 This is the first-ever recording of Dame Ethel Smyth’s vocal symphony The Prison, written in 1929-30 to a text by her former lover, then long since dead, Henry Brewster. It is remarkable for several reasons, among them one of the few symphonies (other than those of Emilie Mayer) written by a woman before the 1970s as well as one of the first symphonies after Mahler’s Eighth to have a sung text depicting  a sort of action.

As the notes point out, Smyth (pronounced like “scythe”) was at a very low ebb prior to writing this work. She considered her creative career to be at an end, and so had embarked on a series of memoirs which sold very well and eventually rekindled her name with the British public. The genesis of The Prison was a six-week tour she made of Greece in 1925. In preparation for this journey, she read English translations of Homer, Hesiod, Phaedrus and Hippolytus, but also Brewster’s small work of fiction, The Prison: A Dialogue. This was “a Platonic dialogue between four friends who need to read a newly discovered text, presumed to have been written by a prisoner on the eve of execution. Each reader voices a different philosophical method – supernaturalist, neo-Platonist, Christian, and positivist, respectively – to comment on moral and philosophical problems found in the text.”

For her symphony, Smyth jettisoned all of the four friends’ speculations. She concentrated on the dialogue between the Prisoner who, though innocent, discusses his imminent end of life and how to prepare for it with his Soul. It makes sense that Beethoven’s Fidelio was her favorite opera; Smyth had been a prisoner in 1912 when fighting with Emmaline Pankhurst’s suffragettes. For the crime of throwing rocks through the windows of the Colonial Secretary’s house, she spent three weeks in prison.—during which time she conducted her own March of the Women from her cell window. A colorful character to say the least.

In her program notes for the first performance, conducted by Smyth herself, she said that she used the term “symphony” to “denote an ancient Greek idea of ‘concordance’ of sweet sounds, not the orchestral genre. The work eludes formal analysis. It is neither a symphony for chorus nor a sacred sinfonia…Nor did Smyth intend her symphony for voices and instruments to be staged, although her papers include pencil sketches of a prison cell and chapel.” Smyth herself conducted the premiere performance on February 19, 1931, with Adrian Boult leading the London premiere at Queen’s Hall, London. From the time of Boult’s performance, however, the work slipped into oblivion.

From the very opening, in which we hear the prisoner sing “I awoke in the middle of the night and heard the sighing of the wind,” I knew I was in for a treat, and not just musically. Dashon Burton is that rara avis nowadays, a singer with 1) a firm, steady, and beautiful voice, and 2) perfect English diction. You almost don’t even need to read the text as long as he is singing, since every word is crystal clear. As for the musical style, it is eerily similar to the slower, more dramatic sections of Fidelio except for Smyth’s use of a continuously moving and developing musical line—in that respect, certain “symphonic” as are Wagner’s operas—and somewhat more modern harmony which evolved from her encounters with both Wagner and the French school of Ravel, Dukas and Roussel which developed out of him. Indeed, once the Soul enters (soprano Sarah Brailey, who has an absolutely gorgeous voice but only intermittently clear diction), I heard a lot of similarity between The Prison and such works as Ariane et Barbe-Bleue and especially Roussel’s Le Festin de ‘Araignée, an entirely different sound-world from her Mass in D or her most famous opera, The Wreckers, both of which combined her British sensibilities with the aesthetics of Brahms. Yet within her use of chromatic runs, as in the Mass, her very British sense of lyricism. In some respects, this might almost have been an early work by Britten when he was still under the guidance of Frank Bridge. Whatever you yourself think of it, it certainly did not deserve to languish unplayed and unheard for nearly a century…but Ethel Smyth was a woman composer, and you know how that that song goes. 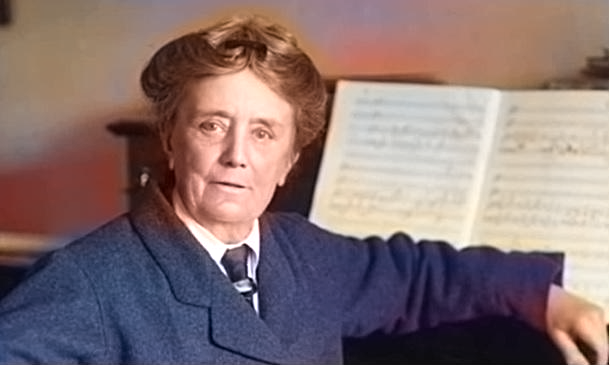 I would call it more of an extended cantata for solo voices, chorus and orchestra, regardless of what Smyth herself called it. In this respect it is similar in form (but of course, not in musical style) to Bohuslav Martinů’s The Epic of Gilgamesh. In one of the Soul’s solo arias, “Close on Freedom, there is no secret,” Smyth gives herself over to an almost Romantic lyric expression; indeed, I consider this one of the most beautiful arias ever written by a British composer regardless of era or gender.

Much of the credit for the success of this performance must, of course, go to conductor James Blachly. His musical style is a bit more flowing, more lyrical and somewhat less dramatically dynamic than that of Odaline de la Martinez, who conducted the recording of The Wreckers and indeed is a Smyth specialist, yet Blachly does not underplay the dramatic moments; he merely folds them into the lyric line a bit more smoothly. Some of the choral singing is also remarkably clear in diction, and this also helps.

Although not broken into movements, The Prison is divided into two sections, “Close on Freedom” and “The Deliverance,” both of which last more than a half hour. The liner notes do not indicate whether or not there was either a pause or an intermission at either of the 1931 performances, but I’d think that at least a three-minute break for silence would have been appropriate. Perhaps, however, this extraordinary length for such a relatively simple dialogue, as well as its huge orchestral and choral proportions for what is essentially an intimate one, is what led to The Prison being unperformed for so long. Yet we continually hear revivals of that gargantuan piece of rubbish, The Dream of Gerontius, because it was written by a man, Edward Elgar of sainted memory. Ethel Smyth? Oh yes, she was that queer little mannish woman who rubbed people the wrong way. Never mind.

The weakest part of the score, in my opinion, is the closing 11 minutes of Part 1, which become mired in slow, heavy, Romantic goop, and this mood continues into the opening of Part 2. It’s almost as if Smyth composed those parts of the score completely independently of the large opening section of the work, scuttling her modern French harmonies in favor of a heavier, more Brahmsian expression. At least, that was my own impression. This is what I meant about the music getting somewhat bogged down and stretching out her ideas over a period of time that is too long. I could easily have lived without the long, heavy-handed orchestral introduction to Part 2, which in my view could be completely jettisoned from a performance of the piece without any real damage to the music. The Soul’s following arioso, “The struggle is over, the time has come,” is back in Smyth’s more modern-French style, although here Naxos messed up by only giving us poor reviewers 30 seconds of music whereas the full aria runs 2:51.

The ending of the piece is rousing, the tempo and energy of the music picking up near the end of “For years you have been conning your lesson” and continuing into the final piece, “This is no leavetaking.” Even here, however, Smyth brings a very British sensibility to the finale, using slow march rhythms for the prisoner and a slow waltz for the final duet between the Soul and the Prisoner (with chorus).

To sum up, The Prison has several brilliant and original sections as well as sections that are conventionally Romantic, but considering how big Romantic music is nowadays and how it still sells like Swiss cheese, I’d think that audiences would embrace it. Thus I not only encourage you to hear this recording but also I encourage conductors to take it up and perform it. With a little snappier conducting, those Romantic sections wouldn’t drag as much and I think The Prison would be quite successful in the concert hall.