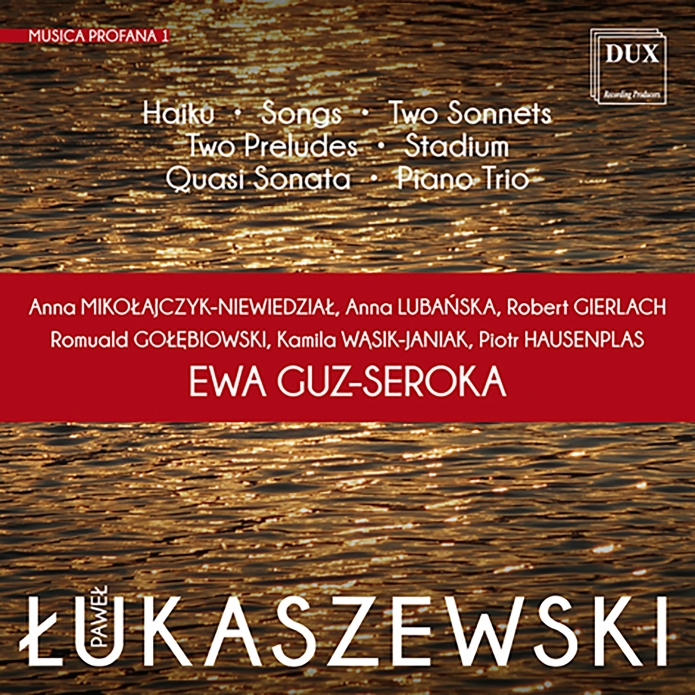 In the wake of Henryk Górecki’s death in 2010, the younger Paweł Łukaszewski (b. 1968) has moved into his slot as the most popular Polish composer of tonal religious music, but since I have very little stomach for choral music and particularly religious choral music, I chose to review this CD of his secular (profane) works. The liner notes tell us that this CD was produced as part of Ewa Guz-Saroka’s doctoral dissertation, The Piano in Paweł Łukaszewski’s Musical Output.

Like his predecessor, Łukaszewski often uses slow melodic lines and “space” between notes to create a quasi-mystical feeling. Where he differs from Górecki is in his use of modal and whole-tone scales, into which he intersperses some chromatic harmonic movement. This is clearly evident in the first three pieces, which are all for solo piano, the 2 Preludes and Stadium. I found this music to be somewhat hypnotic in its own way, much like a modern Satie; the second Prelude, in fact, has a faster pace, an edgier sound and consistent use of odd harmonic spacing combined with crashing dissonant chords, as if to offset the simple, fragile, largely tonal first Prelude. Stadium is also a very busy piece, more tonal than its predecessor but still leaning towards minor modes.

The first set of songs, Haiku, is sung by soprano Anna Mikołajczyk-Niewiedział (try saying that three times fast!). Unfortunately, the texts are given in the booklet in Polish only; happily, Google Translate was able to help me. The first song says this:

Pretty spacey stuff. Mikołajczyk-Niewiedział has a very pretty voice with a little “bite” in the tone but no real wobble, just a touch of a slow beat. She also has superb, clear diction. These songs, needless to say, are in Łukaszewski’s slower style, but they are truly hypnotic and fascinating despite the minimal melodies and rather conventionally tonal accompaniment, consisting mostly of rolling arpeggios and a few spaced-out chords. Occasionally, the vocal line uses wide intervals, forcing the soprano to make large leaps upward or downward, but is generally gracious to the voice. There’s a certain Stravinsky-like quality about these pieces.

The next three groups of songs are performed by baritone Robert Gierlach, who possesses a pleasant, steady but somewhat covered, slightly nasal voice (think of a slightly more nasal Nelson Eddy), but he too has excellent diction and is an interesting interpreter. The first of the 2 Songs, to texts by Czesław Miłosz, goes as follows:

When the wind blows, the gardens sparkle
Like great calm and gentle seas.
The foam on the leaves will run, and then
Gardens and green seas again.

Green mountains descending towards rivers,
Wherever the shepherd’s flute dances.
Pink flowers with a golden eyelid,
Which so please childish hearts.

Gardens, my beautiful gardens!
You won’t find such gardens in the world.
Or so clean, ever-living water,
In such a spring, sunk in the summer.

The musical style of these songs is similar but not identical to those in Haiku, and though they are tonal and somewhat attractive I found them somewhat less interesting. The second Sacred Song sounded, to my ears, very Russian in character, as did the 2 Songs after Death, the latter having a definite Mussorgsky connotation. By contrast, the 3 Songs following were rather goopy in the accepted Millennial style–musical wallpaper for your Sunday brunch—but fairly well sung by mezzo-soprano Anna Lubańska, whose voice is extremely nasal though she, too, has very fine diction.

The clarinet Quasi Sonata intersperses some very interesting passages with some very drippy music. I liked some of it, particularly the “Coda,” but also disliked much of it. The same is true of the Piano Trio.

So there you have it. Some very interesting music, some so-so music, and a bit of continual drippiness. Overall, however, an interesting album.