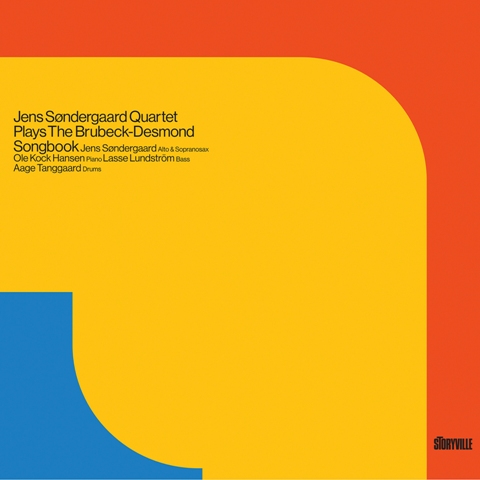 Dave Brubeck seems to be a jazz composer not much in favor with today’s musicians, perhaps because his unusual combination of classical formality and the blues doesn’t have a parallel niche nowadays, but here is Danish saxist Jens Sondergaard and his quartet tackling several of his pieces along with three by Paul Desmond and Juan Tizol’s Perdido, a Desmond favorite.

Søndergaard doesn’t sound like Desmond and in fact doesn’t even try. He pours his own warm alto sound into the Desmond method of phrasing, sometimes switching to soprano sax for a number or two. For those who forget, or haven’t heard him, Desmond used a very hard reed, drawing an almost clarinet-like sound from his alto.  For that matter, pianist Ole Kock Hansen doesn’t try to emulate Brubeck’s chunky, deep-in-the-keys approach, playing in a smoother, more conventional style. And yet it’s an interesting set that gives a new feel to these old chestnuts.

To my ears, however, the star musician in this quartet is bassist Lasse Lundström, whose playing is more interesting and harmonically daring than either Norman Bates or Eugene Wright of the old Brubeck quartets. He does, however, emulate the light, bouncing swing of Wright, who was a big improvement over his predecessors in the famed Brubeck Quartet.

The Sondergaard group does an especially fine job on Perdido, rewriting it somewhat and giving Lundström plenty of room, which is all to the good. His solo following the opening statement of the tune is simply astounding in its virtuosity and ingenuity, and in fact it seems to spark Søndergaard to one of his best solos as well. Two pieces from the famous tour album are included, Brandenburg Gate and Dzekuje (Thank You), and these are given nicely swinging performances. In the former, Hansen and Søndergaard give us a bit of Brubeckian classical counterpoint in a nice duo-chorus before the end. Kathy’s Waltz begins in 4, with the bass and drums providing a really nice, swinging support for the piano and, later, saxophone in 3.

Needless to say, Hansen’s piano dominates Brubeck’s tribute to The Duke, and he does a fine job with it. Hansen also sets up and maintains an excellent beat on Bossa Antiqua, which features yet another tasteful solo by Lundström, who then introduces the next number, Here Comes McBride, all by himself.

I also liked the programming of the tunes on this album, with the somewhat laid-back Here Comes McBride followed by the very perky Why Not, then The Basie Band is Back in Town on which the quartet sets up a really nice, swinging groove, including a rare (but brief) drum solo by Aage Tangaard, who keeps excellent time throughout. I was also quite happy to hear It’s a Raggy Waltz, one of my all-time favorite Brubeck pieces, done to a turn. After doing a nice job on the lyrical Dzejuke, the quartet wraps the program up with Broadway Bossa Nova.

This is a really nice recording: nothing fancy, mind you, just good, solid musicianship mixed with a healthy dose of imagination.