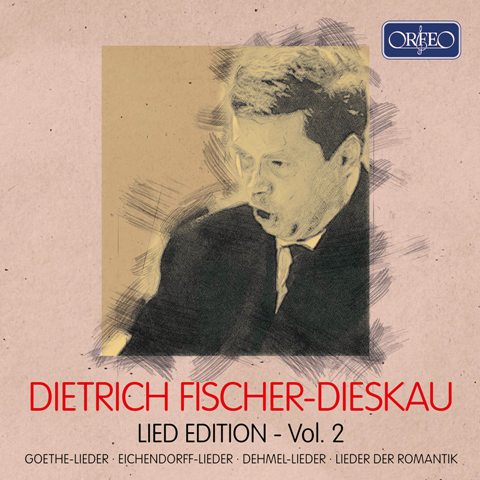 My discovery of lieder and chamber music lagged behind that of opera, orchestral music and solo piano by several years, thus it was not until my freshman year of college that I first heard of Dietrich Fischer-Dieskau from one of my professors. That was in the fall of 1968, rather late in terms of Fi-Di’s career which had begun in earnest some 20 years earlier, but I quickly caught up. I almost saw him in person in 1974 at a New York Philharmonic concert; I bought my ticket and went, only to discover that he had cancelled (his place was taken by Thomas Paul, a good baritone but certainly not the legendary Fischer-Dieskau). I finally saw him at a Carnegie Hall recital in 1976 and was somewhat disappointed. The voice was still firm, but the lovely brightness of his tone had waned by then. His tone sounded rather dull, which led me to wonder if the microphone added the brightness to his sound. Yet he continued to sing and record into the late 1980s, by which time he was clearly past his prime.

I was unable to obtain a copy of Vol. 1 in this series for review, but luckily I got Vol. 2, and the first thing that struck me was that most of these are late recordings, made between 1975 (CD 2) and 1985 (CD 3). The second was the sheer diversity of material covered here: many composers whose work he seldom if ever recorded earlier, and quite a few I’d never heard of before, such as Anna Amalia von Sachsen-Weimar, Johann Friedrich Reichardt, Conrad Ansorge, Sigismund Ritter von Neukomm, Carl Gottlieb Reissiger and Lorenz Kraussold. The third was that each CD features a different accompanist, with CD 3—the one with the most modern music on it, including Anton Webern and Artur Schnabel—begin accompanied by none other than avant-garde composer Aribert Reimann. In addition, all of CD 1, which stems from 1970, consists of live performances from Fischer-Dieskau’s personal tape archive, all material that has never been previously released.

It is in this first CD that we still hear the Fischer-Dieskau that we are familiar with from his many, many EMI and Deutsche Grammophon recordings made between 1948 and the late ‘60s. Judging from what I hear, the engineers at Orfeo seem to have applied some hiss and noise removal to these tapes, which I certainly appreciate. Fischer-Dieskau’s vocal tone is unaffected, but in many places Karl Engel’s piano sounds a bit muffled—the price you pay for noise reduction of old private recordings. Fortunately, they have managed to retain much of the hall ambience, which helps.

Fischer-Dieskau was so widely admired and praised throughout his major career that I didn’t realize that there were some musicians and critics who didn’t like him. They accused him of over-italicizing the words and music, making too much out of what they perceived as straightforward songs and arias, just as I also later discovered that many Germans disliked Artur Schnabel’s piano playing for the same reason. (One such musician sneeringly referred to this practice of pianism as “Schnabel-izing.”) Now there are certainly times when I feel that certain singers, pianists and violinists go too far in this direction, but Schnabel and Fischer-Dieskau were not two of them, and when one thinks of it, they might have performed together since Fi-Di started singing professionally shortly after World War II and Schnabel lived until 1951, but alas such was not the case. Schnabel had given up lieder accompanying long before 1940.

What others hear as over-italicizing I hear as bringing a conversational style to the presentation of lieder and opera. Of course, good taste also played a part in this, and one’s individual response to such things, but Fischer-Dieskau was a singer greatly admired by both conductors who really did over-italicize things such as Wilhelm Furtwängler and Leonard Bernstein and those who conducted in a clean, straightforward style like Ferenc Fricsay, Paul Kletzki and Benjamin Britten. The Fi-Di detractors are clearly in the minority.

By the time you reach the third track of the first CD, Carl Zelter’s Gleich ind Gleich, you’re hooked. The good news is that Orfeo has included all the lyrics to every song except von Neukomm’s Poor Adele, for which no text was available. The bad news is that they’re only in the original languages, which means nearly all German except for the Donizetti and Berlioz songs. Well, here we go to Emily Ezüst’s magnificent LiederNet Archive once again to go digging for English translations! (https://www.lieder.net/lieder/cindex.html) Happily, several of the songs here are well-known ones by Beethoven, Schubert, Schumann, Brahms and Wolf, so you needn’t bother with those.

This live 1970 version of Schubert’s famous Erlkönig, for instance, is even more intense than his pre-1970 studio recordings, whereas some of the other songs may not be more intense but contain little interpretive details not always found in the studio versions. His rapid patter at the end of Beethoven’s Song of the Flea made me wonder why he avoided singing German comic operas or operetta; he would clearly have been good in them. And this version of Schubert’s Der Musensohn also sparkles, dancing across your mind on light feet.

The second CD is a live recording of the Salzburg Festival concert that Fischer-Dieskau gave with Wolfgang Sawallisch as his accompanist in August 1975, and here you can detect somewhat less brightness in the voice but no diminution of his expressive powers. The composers chosen include many well-known ones but also three songs by Reinhard Schwarz-Schilling (1904-1987) and two songs by, of all people, Bruno Walter. The Pfitzner songs are a bit strange, particularly In Danzig. Walter’s Der Soldat is a surprisingly interesting song, requiring Fischer-Dieskau to enter on a high G and using a swaggering 6/8 rhythm. And boy, does he do a lively job on Wolf’s Seemans Abschied, including a trill! Another interesting interpretation here is Hugo Wolf’s famous Verschweigene Liebe. Fischeer-Dieskau sings it with his customary attention to text and delicacy, yet the tempo is considerably faster than I am used to.

CD 3 is the really odd one. Although it contains songs by Reger, Zemlinsky, Pfitzner and Strauss, it also includes music by Szymanowski, Ansorge, Schnabel and Webern, composers whose music he seldom performed, and the accompanist is modern composer Aribert Reimann. Thanks to the advantageous mike placement, the voice still sounds bright but not quite as firm under pressure and no longer youthful, yet his interpretive skills were unimpaired. In Zemlinsky’s Entbietung it also sounds much darker. As I expected, Schnabel’s setting of Dehmel’s Notturno („So müd hin schwand es in die Nacht”) was very strange, leaning towards bitonality and sometimes atonality if not as spiky as most of his piano or orchestral pieces. Yet the music perfectly matches the somber, almost surreal lyrics, of which these are the first four stanzas:

So wearily it disappears into the night,
His pleading song, his bow-strokes,
And sighing I awakened.
How clear it made everything to me,
So soft and clear,
The dream — and yet
It was solemn to the depths of sorrow.

The moon hung high; the snowy expanse
Lay pale and desolate about us,
Like my soul heavy with dread,
For beside me, so rigid and wild,
As rigid and cold as my suffering,
Called by me full of desire,
Death sat stiffly and waited.

Then it came wafting over as mildly as in the past,
So wearily and gently
From distant night,
So heavy with sorrow
The breath of a violin came,
Dimly the image of a friend came.

He who had woven himself about me like a ribbon
So that my youth did not fall apart,
And that my heart found that longing,
The great longing without an object:
There he stood now in the desolate land,
A pale and solemn shadow,
And neither looked up nor greeted me,
Only his musical sounds did he let drift
And weep through the cold meadow;
And only staring at me
From his brow,
As if it were an eye, hollow and pallid,
Was the dark mark of a deep wound.[1]

It almost sounds like something by Alban Berg, and although Fischer-Dieskau’s upper notes are somewhat strained and brittle his new deep low range pays dividends in this song. Interestingly, he does not sing it with a strophic, almost spoken delivery but with a real legato, treating it as if it were Schumann. This is clearly one of the real highlights of the entire album. The early songs of Webern are more lyrical and tonal than any of his later music, yet if you listen carefully you can tell that his mind was already conceiving music in a somewhat different way. By the time you reach Himmelsfahrt he sounds like the Webern you know, kind of; certainly different from the previous songs. Yet again, Fischer-Dieskau caresses the line lovingly. No Sprechstimme for him, even when the music sounds suspiciously like Pierrot Lunaire. And yet, even the Strauss songs presented here are a little weird, particularly the 12 ½-minute Notturno with its almost ghostly violin accompaniment.

The last CD is also a bit strange, containing mostly songs in languages foreign to him such as English, Italian and French. Although Fischer-Dieskau’s spoken English was tolerably good, his pronunciation in Poor Adele is simply atrocious. I had to strain to make out at least half of the words he was singing. Another novelty of his disc is that every song is accompanied by a clarinet or a French horn. Clarinetist Dieter Klöcker plays pretty well, but hornist Klaus Wallendorf has a really muffled, crappy-sounding tone. Pianist Harnut Höll, however, plays very well. Fi-Di is not in very good voice on this session (though his breath control was still pretty good), but he still had his trill, which he displayed in Kreutzer’s Das Mühlrad. Some of the problems with both Fischer-Dieskau’s voice and Wallendorf’s horn, however, are due to the muddy and covered sound (sometimes, as in Reissiger’s Abendständchen an die Geleibte, with a rough, almost “scratchy” artifact noise at the end of every horn note), quite surprising for a digital recording even then. Recording engineer Teije van Geest should have been ashamed of himself for this travesty. But if you strain enough to hear them, many of the performances are marvelous.

So that’s my opinion out of the clear, clear blue, and I’m sticking to it!

[1] Translation © 2014 by Sharon Krebs as posted at the LiederNet Archive, https://www.lieder.net/lieder/get_text.html?TextId=106185