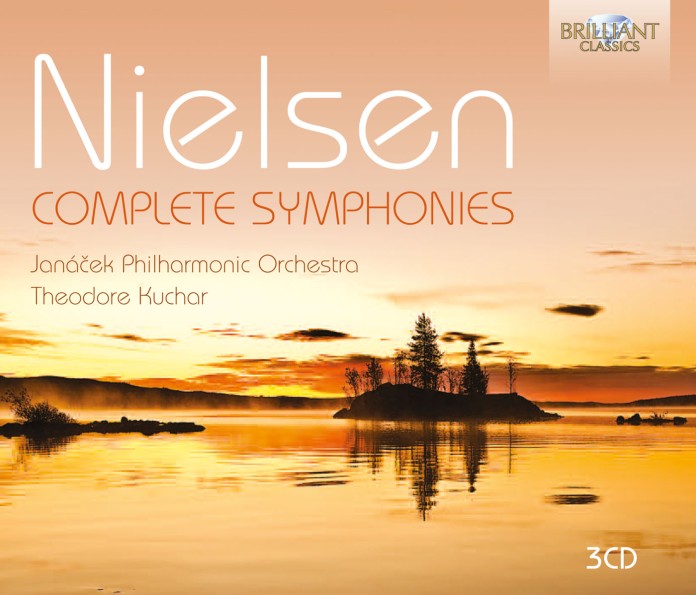 It’s so seldom that critics agree on a particular recording of anything that I found myself drawn as if by a magnet to hear this set of the Nielsen Symphonies and compare it to those I have heard by Douglas Bostock and Herbert Blomstedt. Prior to hearing this 2012 release, I would have told you that Blomstedt’s was the best of the six complete symphonies, but now I find myself in full agreement with Jack Lawson of MusicWeb International, Blair Anderson of AllMusic.com and David Hurwitz of Classics Today.

I probably should have known better. Many years ago, I reviewed Kuchar’s set of the complete orchestral music of Smetana, also on Brilliant Classics, and raved about it. My “fellow critics” immediately began to lambaste me because I had not heard Flippity-Doo-Dah’s recording of the Smetana such-and-such, so how dare I rate it so highly? Until they, too heard it. Then they backed down, because they realized that Kuchar and I were right and they were, unfortunately, wrong.

I have read a few (and only a few) snarky comments by Amazon.com buyers that the Fifth and Sixth Symphonies are too fast, but I have looked at the scores and they’ll full of banana oil. What THEY want is not what NIELSEN wanted; the scores are quite clear on this. But you’ll always run into pompous windbags who feel that no music is “spacious” enough unless you d-r-a-a-a-g-g-g it out like a taffy pull.

So why didn’t I review this when it first came out in 2012? Why, because my editor wouldn’t let me. One of the other “Nielsen Experts” in his stable of critics had dibs on it. I, on the other hand, was offered yet another pile of Chopin and Liszt piano music CDs to review, most of which I turned down. But, as in the case of several other releases I’ve reviewed on this blog, better late than never.

Kuchar combines a lyrical approach with an exciting and dynamic one, similar to that of Thomas Dausgaard in his new recordings of the first two symphonies. While I agree with David Hurwitz that the Janáček Philharmonic is not quite as fine an orchestra as some others, I personally heard nothing much to complain of except that the strings were not particularly silken-sounding—but for me, silken-sounding strings can sometimes impede the visceral impact of music, and in my view Nielsen was, to a great extent, the Danish Mahler. His music needs excitement because the scores demand it.

Interestingly, his Wikipedia page (from which the above information was gleaned) does not list these Nielsen Symphonies at all among his discography, and only Ma Vlast from his massive Smetana set. Even more interestingly, Brilliant Classics seems to have taken this 3-CD set out of their catalog and replaced it with a 13-CD set of Kuchar conducting Eastern European composers of which Nielsen is one. The entire set is, however, available for free streaming on YouTube, and I highly recommend it to your attention. In actuality, Kuchar is the most-recorded conductor of his generation, having made over 130 compact discs for Naxos, Brilliant Classics, Ondine, Marco Polo and Toccata Classics. Kuchar has also received numerous awards for his recordings such as the BBC Record of the Year, Australian Broadcasting Corporation Record of the Year, Chamber Music America Record of the Year, Gramophone Magazine’s Editor’s Choice, the WQXR Record of the Year and a Grammy nomination in the category of Best Instrumental Album of 2013. The 2016-17 season saw the release of seven new compact discs, devoted to the complete symphonies of Ukrainian Boris Lyatoshynsky and Yevhen Stankovych (National Symphony Orchestra of Ukraine), orchestral works by the Turkish composer Ulvi Camal Erkin (with the Istanbul State Symphony Orchestra).

One reason why some listeners probably don’t like these performances is the very sharp, almost clipped attacks on forte chords, particularly in fast passages. Many listeners are so used to the more rounded, “soft” attacks on chords provided by many of today’s conductors, particularly British ones, that hearing such a muscular approach unsettles their equilibrium. In only one movement did I feel that Kuchar was too slow, and that was the “Andante malincolio” of the Second Symphony, which he played more like an Adagio.

Where Kuchar scores over Blomstedt, in particular, is in the “turnarounds” of phrases, which he conducts much more elegantly. A perfect example is the sudden switch from a soft volume and medium tempo to the sudden blare of trombones and the full orchestra at the six-minute mark of the first movement of the “Inextinguishable.” He also brings considerable delicacy (and subtle humor) to the second movement of the same symphony and, in the finale, pulls out all the stops to show his similarity here to Mahler. I haven’t heard details like that since Michael Gielen conducted the Nielsen Fourth with the Cincinnati Symphony eons ago. Blomstedt played Nielsen as a modern-day Beethoven, and that’s not entirely bad, but the Danish composer had a touch more elegance in his phrasing the same way Mahler did. (Many people forget that Nielsen was a musical polyglot who toured Europe and heard all the new music of his time, and thus absorbed influences that were not Danish.) Jascha Horenstein, a first-rate Mahler conductor who also recorded Nielsen (the Third, Fifth and Sixth Symphonies), also brought the same sensibility to both composers. Incidentally, I’m pleased to report that our unidentified soprano and baritone who sing in the second movement of the Third Symphony have fine voices. I just wish I knew who they were.

A dissenting voice on Amazon.com complained of Kuchar’s interpretations of the Fifth and Sixth Symphonies, claiming that they lacked “mystery,” but if one looks at the scores he does everything the composer asked. This is like those people who claim that Toscanini is not “mysterious” enough in Sibelius whereas, if you listen to the symphony recordings by Sibelius’ favorite interpreter, Robert Kajanus, they are just as swift and powerful as Toscanini’s own. I had no problem at all with these performances. As a matter of fact, I liked the grotesque quality of the clarinet solo in the first movement of the Fifth very much, and Kuchar gets the multilayered, conflicting rhythms in the second half of the long first movement just right (some conductors don’t).

This is a superb set of performances, highly recommended.