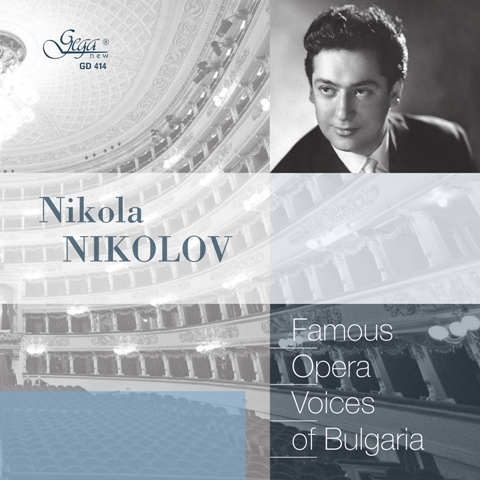 This recital presents early-1960s live mono broadcast performances by the Bulgarian tenor Nikola Nikolai, who was born in 1925. Since no death date is available online, I would assume that he is still alive, but I can’t say for certain. He studied voice with Sabcho Sabev, made his debut at age 22 as Pinkerton, won an award for his singing in 1951 and joined the roster of the Sofia National Opera in 1955, specializing in the Italian repertoire. Judging from these performances, he had a huge, cutting tenor voice, was a musically “clean” singer (meaning that he followed the note values of the score and didn’t play around with tempi), but amazingly unsubtle. Everything was sung between a mezzo-forte and a fortissimo, even when the scores called for soft singing—i.e., the opening phrases of “O paradiso” and “E lucevan le stelle,” and most of “Come un bel di di maggio.”

The publicity blurb accompanying this release emphasizes his international career, boasting that he sang at the Metropolitan Opera among other places and made recordings, but his only known commercial recording were an Aida with soprano Julia Wiener and a Carmen with Alexandrina Milchova-Nonova and Nicola Ghiuselev.

Nikolov sang exactly two performances at the Met, as Don José in Carmen in November 1960. He was not appreciated by the critics. Jay S. Harrison, writing in the now-defunct New York Herald-Tribune, said:

Mr. Nikolov, I am sorry to say, was so paralyzed by debut jitters that he failed to make any notable impression at all. And, if the sounds he produced on this occasion were not a result of the strain attendant on a first New York appearance, then he really has no legitimate business at the Met. Throughout the evening he produced not a single tone below the forte level even when the score demanded otherwise, and there were frequent instances during which he bellowed rather than sang. Further, he and the proper pitch were not always in agreement, nor did he attempt, at more than odd moments, to shape a phrase so that it emerged with any clear shape or profile. In all, then, one must wait for Mr. Nikolov’s future opera assignments to discover whether his faults were traceable to first night nerves or are a consequence of imperfect training.

In short, Nikolov was a belter, but so too was Mario del Monaco in 99% of everything he ever sang, and del Monaco was a very welcome visitor at the Met. The difference seems to be that del Monaco was an Italian singing Italian (and French) opera whereas Nikolov was a Bulgarian, and not that well known in the West, thus it was much easier for the critics to pick on him and run him out of town.

On these performances he does not go flat once, and although he is not subtle he is clearly no less unsubtle than del Monaco. In “Celeste Aida,” for instance, he does modify his volume a little in certain phrases if not as much as one may like. And Nikolov’s voice seemed to have gone on forever; he celebrated his 70th birthday singing Don José and his 75th singing Manrico, both at the Sofia National Opera. And Lord almighty, did this guy have a “cut” to the voice! The high notes ring out like a huge church bell being hit with a bazooka, and his high range lacked the tightness that afflicted del Monaco from about 1957 onward. But yes, he wasn’t much of an interpreter. In “Dio! Mi potevi scagliar,” he sounds angry but not anguished. He comes across as someone who just wants to belt Desdemona in the choppers and then walk away satisfied.

Like del Monaco, Nikolov clearly had a big spinto voice, almost that of a dramatic tenor, and often such voices are hard to control…but it can be done. Even Giovanni Zenatello, who clearly had the biggest tenor voice of his day, had trouble singing softly yet managed to do it a bit more easily than Nikolov, and then you think of Helge Rosvaenge, Vladimir Atlantov and Jon Vickers (although Vickers’ unusual timbre was in a class by itself), all of whom were more imaginative singers than Nikolov. You also wonder, really, what business he had singing such really lyrical roles as Rodolfo, Des Grieux, Pinkerton and Andrea Chenier, where beltin’ out da high notes is only a small part of what that music is supposed to convey. Liliana Vassileva, who joins Nikolov in the duets from La Bohème and Lubomir Pipkov’s Momchil, had a very pretty voice for a Bulgarian soprano but, like Nikolov, wasn’t very subtle. In the opening of “Sono andati” from Bohème, she sounds pretty damn healthy for a woman who’s dying.

Moreover, Nikolov was scarcely the only, or even the first, tenor to make his debut at the Old Met, take a look at its size and think, “Holy cripes! I’ve really got to put out to fill this barn!” Jussi Björling, by his own admission, made the exact same error in 1937 at his debut (as Rodolfo), and the critics were not kind when describing his hard, harsh high notes. But Björling had a sweeter tone than Nikolov, and better phrasing, and so he lasted whereas Nikolov was kicked out after just a short spell—as was Aureliano Pertile, another pretty good belter, in 1922, although Pertile sang 13 performances in six operas.

So you see, I’m giving him the benefit of the doubt here. Subtle he wasn’t, but when you think of how crudely Franco Corelli sang at the Met for nearly two decades and how many performances he absolutely ruined with his sloppy phrasing and hanging onto notes, both high and low, much longer than the score allows, I think that Franco’s professional jealousy may have played a part in Nikolov’s being booted from the Met.

In short, even admitting his flaws as an artist, you’ve got to hear this voice for yourself. You simply won’t believe it.